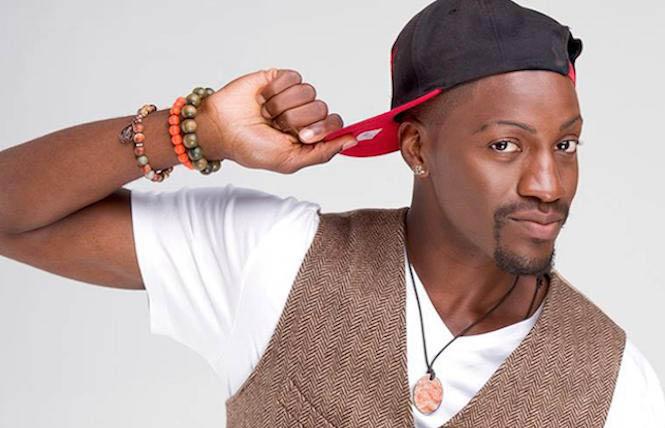 In the new video of his recent full stand-up set, gay Black comic Sampson McCormick balances insight and wit with his usual dexterity. In these times of pandemics and protests, finding a balance of political and social justice insight with punch lines can be a tricky recipe, one that McCormick serves up with his usual panache.

"I've been an activist since I was 15 years old," said McCormick in a phone interview from his home in Los Angeles.

Despite his performances blending social commentary with comedy, the 34-year-old writer, director and indie film producer said he doesn't see big changes taking place just yet. Of the recent nationwide and global protests against police violence, specifically the murder of George Floyd in Minneapolis, he noted, "I'm not discouraged. But as an observer, it's going to take something even more drastic for change to happen.

"I honestly believe that I've become so numb to all the things that have happened to Black people in this country, the only thing we can do is have needed conversations. But as far as changing somebody's mind about Black people or gay people? That's how they're going to feel. What I want is your respect."

Born in Washington D.C. and partially raised in North Carolina, in his comedy sets, McCormick discusses being raised by an abusive stepfather, and being expelled by his church for being gay in his stand-up act.
His later successes in college, with two degrees, led to performing, and over the years he's performed at universities, concert halls (Howard Theater, Kennedy Center for The Performing Arts, Laugh Factory in Hollywood, San Francisco Punch Line, Harvard University), even the White House (not this administration, obviously).

As fences and armored tanks now surround the current White House occupier, asked what he sees needs to change, McCormick said, "Unless we completely defund and dismantle the U.S. police department as we know it, nothing will change. We know what this country was founded on. In order for us to be able to really change, we're going to have to have a rebirth."

We discussed related topics, from the D.W. Griffith's silent film the Birth of a Nation and its blatant pro-Ku Klux Klan propaganda, to actress Angelica Ross' recent online conversation where she explained the growth of U.S. police departments as being specifically created after slaves were freed following the Civil War.

"They called them patarollers, because they couldn't call them patrollers, and were created to terrorize people of color. And that's exactly what they're doing today." 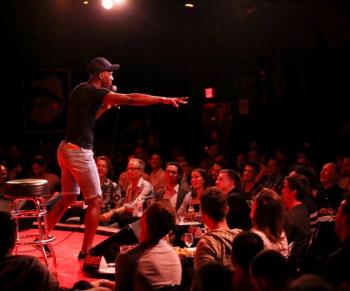 Sampson McCormick at a recent performance

So, how does McCormick make such a sordid history funny?

"In my stand-up, I do make it a point to make sure that we're still laughing, as we face the dilemmas that we're in," said McCormick, who said he did have some friends and fans asking, after the release of his latest show, "'Do you think this is the right time to be laughing?' But as someone who's lived quite the roller coaster ride, I know how important the power of laughter is.

"If you look at every minority group in this country, whether it's Black, Jewish, LGBT, we have the best sense of humor out of anybody, because we face the greatest tragedies and hardship. It's about being able to acknowledge what's going on, know what's causing you pain, and finding truth to face those challenges."

McCormick compared it to physical therapy after an injury, that to heal, "You're bending, stretching and it may hurt, but that's what good comedy does. The real comics, not the assholes, but the real ones, are providing healing."

"As soon as the quarantine lifts, I'll definitely get back up to the Bay Area," said McCormick as he reminisced about his recent busy touring schedule. What else is he doing? 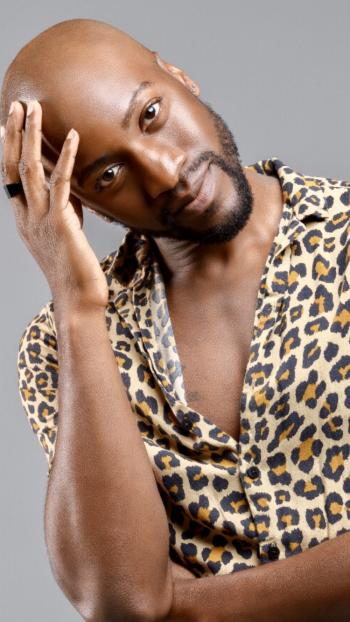 "Resting," he deadpanned. "I've been able to take the time to see where I'm at, as a person. That's helped me develop some new work that I hope to share with audiences when I do get back on the road."

McCormick has also participated in recent online panels and shows, but was sincere about the 'resting' comment.

"I don't think people understand how demanding it is to be Black and gay in entertainment," he said. "You're outside of the mainstream mold; when you have a body of work that is explicitly Black and gay, it requires a lot of effort."

McCormick's film projects as director, writer, producer and performer include his concert film That Bitch Better Be Funny (2014), the comedy documentary A Tough Act to Follow (2016), the short film A Different Direction (2019), the comedy thriller Party-N-Play, about an obsessed Beyoncé fan, and his latest, Church Boy, his D.C. show video.

Given his experience, does McCormick see changes in what will appeal to viewers, with on-demand replacing theatrical film releases? How will artistry and the idea of 'celebrity' change?

He said that artists "need to be genuinely dynamic in order to sustain a career in this business. Whether that means keeping a finger on the pulse of society, or being so dynamically you that people don't get tired of you; evolving with people willing to go on that ride with you."

As we compared current talents to historic Black comics, from Richard Pryor to Flip Wilson, McCormick noted, "You can almost look at a lot of great older comedy as a history book," said McCormick. "Really good comedy has transcended time; Dick Gregory, Moms Mabley, and even before that, the Black Vaudeville troupes where they couldn't even get a dressing room and had to change costumes out in an alley. The actors called it the TOBA circuit; Tough On Black Asses. They would do their shows and still couldn't find a room to rent, so they had to travel 15 miles to the next town, or the black part of town, or sleep in someone's basement or living room. all these stories that point to our history as people of color; drag queens have similar stories, which is why I don't understand racist gay white people."

As to how fans view new works, McCormick said, "We have to what the New Normal is. As long as people can have watch parties, and small film festivals are going online. People at home still want to see original content. I actually think this is going to be a great time for Black and queer films with the narrative that we don't get to see from Hollywood."

Watch Sampson McCormick online at www.sampsoncomedy.com and on his YouTube channel.