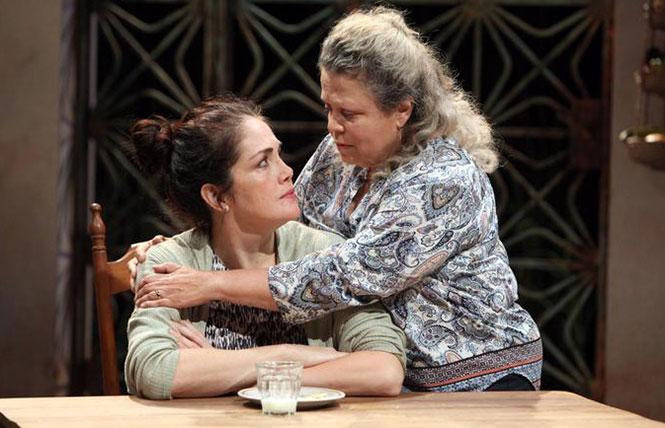 The fruit is forbidden, but the pulp is irresistible. That's the tension that playwright Ricardo Pérez González, director David Mendizábal and a cast of five extraordinarily well-cast actors play with in "Don't Eat the Mangos," the dangerously delicious, pitch-black family drama that premiered at the Magic Theatre earlier this month before having its run cut short by COVID-19. It's a show that takes on taboo subject matter, then wrenches nervous, relieving laughter from its own darkness. This production deserves to be brought back to the Bay Area so more audiences can savor its ripe intensity.

The Puerto Rico-set story features three grown sisters tending to their aging parents. Mami (Wilma Bonet) has cancer, recently returned, and terminal, after long remission. Bedridden, ventilated Papi (Julian López-Morillas) hacks and wheezes from a darkened bedroom where he rings a bell to summon the women, all of whom he regards as attendants to his whims. Before the show's 90 minutes are up, gruesome family secrets are spilled and messy revenge is taken in a plot that owes as much to Stephen King as it does to Julia Alvarez or Cristina García.

I loved being twisted between horror and laughter as an audience member, but I can hardly imagine how challenging it was for Pérez González, Mendizábal and their cast to tightrope-walk their way to just the right tone for each scene, acknowledging that humor is part of what makes us human, even in the face of trauma. I can more clearly imagine other directors and other casts mounting this show without the playwright at hand and generating entirely different productions, erratically zig-zagging between tones or conservatively shying away from the razor's-edge writing to yield a miserable, moralizing night at the theater.

That said, for some attendees, the gags (figurative and literal) in "Don't Eat the Mangos" may forever feel "too soon." Without giving away the plot's twists, the biggest of which is masterfully foreshadowed in the script and in Elena Estér's taut portrayal of mordant middle sister Yinoelle, I'll mention that rape, abortion, murder, molestation and suicide are all part of the storyline's kitchen-sink guignol.

Along with Estér, Yetta Gottesman as eldest sibling Ismelda, who still lives at home with their parents, and Marilet Martinez as the spunky youngest Wicha, offer a finely-nuanced portrait of sisterhood. As different as their characters may be — Ismelda slumping into herself, resigned to the worst; Yinoelle balancing brittle contempt and heartbreak; and Wicha leaping from ignorance to outrage in a single harrowing moment — the actors exude a steady hum of emotional sorority, as if there's a very fine, very strong wire forming a circuit among them. When they spontaneously sing a children's song together, their bond is joyfully palpable.

As Mami, Bonet is a reservoir of repressed feeling, her round, superficially smiling face surging and bubbling beneath the surface, like oatmeal on high heat. The extent of the sacrifices she's made and continues to make for her family emerges late and painfully. As Papi, López-Morillas must be both moribund and malevolent, religious and sinister. His most self-deluded, self-excusing lines were met with an audible blend of anger and disgust from the audience.

Tanya Orellana's beautifully detailed set of a long-lived-in rural home — there are tattered notes magneted to the refrigerator door and dirty dishes in the sink — is dominated by an ornamental wrought-iron gate, suggesting both domesticity and imprisonment, and the bending, fruit-laden boughs of a mango tree with secret history that is ultimately revealed. Chris Lundahl's chiaroscuro lighting and sound designer Sara Huddleston's crackling storms add to the air of melodramatic tropical noir.

Don't Eat the Mangos played the Magic Theater through March 13.