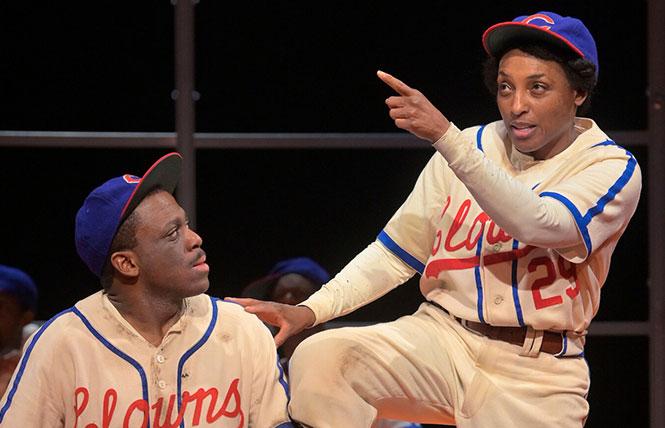 Let's go to the replay. Seriously.

Last Wednesday's opening night performance of "Toni Stone" at A.C.T.'s Geary Theater was a near-perfect game. And while, like virtually all local theater productions, the show's run has been Covid-86ed, word is that A.C.T. is going to make a streaming recorded performance of the play available to ticket-holders. Details have not been ironed out at the time of this writing, but if the video is accessible to the public, watch it. And if you watch it, pay for it with a donation to A.C.T. All of our local theater companies are in critical need of your generosity given current circumstances.

"Toni Stone," written by Lydia Diamond, is a based-on-a-true-story saga of gender and racial barriers in professional baseball. Stone was the first of three women who played in the Negro League, first for the San Francisco Sea Lions in 1949, and later for the Indianapolis Clowns, in the period of her career most prominently featured in the play.

As staged by director Pam McKinnon, who is also A.C.T.'s artistic director, and choreographer Camille Brown, the play moves like a musical, with the cast, frequently in game uniform, theatrically stretching, moving in graceful unison and striking stylized poses that bridge the diamond and the stage. The quick-moving scenes and the sometimes-screwball narrative monologues delivered by Dawn Ursula, a true phenom as Toni, all take place under the gleam of set designer Riccardo Hernandez' klieg-evoking stadium lights, which also draw the connection between sports and showbiz.

That link is one of the many ideas that are intentionally woven into a show that might have been amply satisfying had it simply told the biographical story of an unsung American hero, but is exponentially enriched — but never led to meander — by a full roster of sociocultural subtexts, from parallels and distinctions between different forms of discrimination, to the ethics and economics of prostitution.

But getting back to sports and showbiz, among the most interesting aspects of the play is its depiction of the Negro Leagues as a degrading amalgam of the two, with players expected to offer an exaggerated, comical display of minstrelsy on the field in addition to exercising their athletic skills. There was little need for the likes of the Giants' Lou-Seal or the Phillie Fanatic, because the black players were expected to simultaneously be powerful sportsmen and harmless cartoon versions of themselves. This exhausting, soul-eating dynamic was further heightened for Toni Stone, who was not allowed to play to the best of her ability because the white team owners conspired to have pitchers ease up on her; to them, having a woman on the team was commercial gimmickry rather than social progress.

"Toni Stone" wisely delivers its lessons in nudgey bunts while swinging for the fences when it comes to entertainment. The ribbing camaraderie of a travelling ball club is endlessly funny and frantic. With the exception of Ursula as Toni, the nine actors in the lineup play multiple roles, most memorably Kenn E. Head, who trades cleats for heels as Millie, the proprietor of the roadside whorehouse where the male players flop while Toni gets schooled in sex and romance. Head's postures, gestures and sly vocal tones in his vignettes as Millie are so specific and compelling that he practically disappears in the ensemble scenes when he's just another jock. Ray Shell also shines as Alberga, Toni's gentle, patient suitor, who takes a bad hop toward the end of the show.

In the midst of almost constant motion on stage, Ursula's Toni exudes a welcome stillness and certainty of purpose. She's talented, she's passionate, and she wants to play, and play fair.

But Diamond doesn't paint her as a two-dimensional heroine. Toni is so quirky and peculiar that if "Toni Stone" really were a musical, it would be hard to imagine this character as the leading lady rather than the second banana. Sometimes breathtakingly naïve about any subject other than baseball, Toni can be obsessive and opaque to a point that today might place her somewhere on the autism spectrum.

The only glaring error in the play comes in Diamond's opening and closing speeches for Toni, in which this big-hearted, moral, but touchingly inarticulate woman delivers abstract musings about the need to "reach" and the near-mystical "weight of a thing." The play makes all its points handily, without such high-flown poetics. There's no need for a literary prize in this theatrical box of crackerjack.

'The Woman in Black' at The Strand

Women on the Verge - 'Fefu and Her Friends' at A.C.T.'s Strand
Sign up!