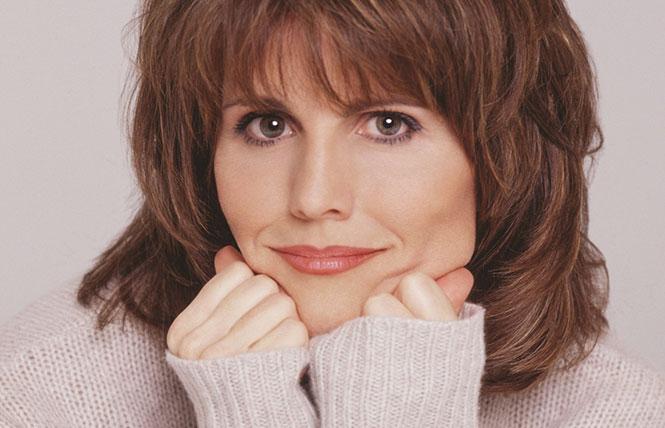 Lucie Arnaz: "I think I have more LGBTQ friends and fans than straight people." Photo: Courtesy the artist

Talk about a living legacy. Singer and actress Lucie Arnaz is the daughter of Lucille Ball and Desi Arnaz. Go ahead, try and top that! Arnaz, who has been married to actor Laurence Luckinbill since 1980, has been acting since she was a child, appearing alongside her mother in "The Lucy Show" in the early 1960s. Arnaz has appeared in movies and TV shows, starred in her own sitcom and hosted a talk show. She starred in the Broadway musical "They're Playing Our Song" and the national tour of the "Pippin" revival. Lucie could also not be more fun to talk to. I recently had the pleasure.

Gregg Shapiro: You had been scheduled for concerts, now canceled, at Feinstein's at the Nikko in San Francisco this month. Who are your inspirations when singing?

Lucie Arnaz: Oh, my god, the list is long! It's kind of eclectic. I would say people who pay attention to lyric as much as their pretty voices. You always want to sing on pitch and have a pleasant sound. But it's the people who sell the stories I'm impressed with. That could be any number of people: Willie Nelson, Rosemary Clooney.

What can you tell me about your show?

It's an idea that started 40 years ago, when my father was still alive. He suggested that I put together a show from all the musicals I'd been in. I laughed at him because I'd only done like three! I said, "It's a short show, Dad!" So I never did it. Now it's many years later, and I've done a bunch of musicals. I looked back at them and thought, "I've got a great show here!" The stories about getting into the shows, and what I learned. Stories about why I even started getting up on stage in the first place. I call it "I Got the Job: Songs from My Musical Past." 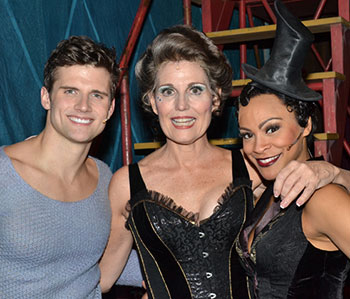 Lucie Arnaz was in the cast of a 2014 revival of Pippin on Broadway — here, with stars Kyle Dean Massey (Pippin) and Carly Hughes (Leading Player). Photo: David Gordon

You played Berthe in the national tour of the revival of "Pippin," singing "No Time at All." What was that like?

You know it was the acrobatic revival of "Pippin," right? My part was the dance trapeze number, at 63 and coming to it completely flabby and untrained. You go up 20 feet in the air with a trapeze partner, and you hang upside down and he holds me just by my pelvis with no net, no wires, nothing. Hang over the stage! Do this gorgeous thing. I had to train to do that. Accomplishing it was as thrilling as singing Stephen [Schwartz]'s wonderful music, as thrilling as tap dancing alongside Tommy Tune in "My One and Only," as thrilling as being in "Mack & Mabel" with Jerry Herman playing the piano.

An upcoming episode of "Will & Grace" is a tribute to "I Love Lucy." What do you think about that?

I was in it! It's one of the last shows of their final season. It was delightful. Max Mutchnick, the producer and writer, told me what they were intending, and the great fondness the whole cast, writers and producers have for "I Love Lucy." They did an amazing, crazy accurate tribute to three or four episodes mixed together, with one focal-point episode that allows you to jump into all the others. I had a little cameo walk-on. I had a great time!

Are you aware of your LGBTQ following?

Oh my God, yeah! Totally! I think I have more LGBTQ friends and fans than straight people. My belief is that we're all both. We just use qualities of ourselves in different ways. Our feminine comes out, our masculine comes out. I'm always comfortable with people who are comfortable with that. They don't care that they have a feminine side if they're a guy. They don't care if they have a masculine side if they're a woman. Those are sides we should embrace. I think to be an LGBTQ person can be terribly hard. You've had to go through some rough patches finding out who you are. But you know what? We all do! We all have to figure out if we're good enough. I spend a lot of time in my life trying to see the oneness in all of this.

I'm going to co-produce the Cate Blanchett/Aaron Sorkin film about my folks for Amazon Studios. It should be happening in the next year or so.