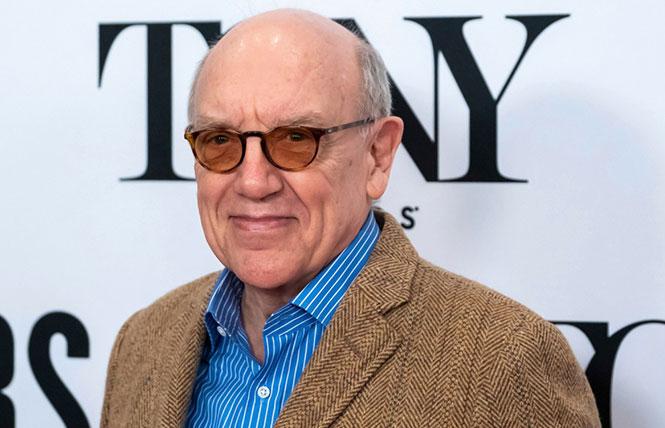 "The Boys in the Band" playwright Mart Crowley. Photo: AP

Mart Crowley, whose landmark 1968 play "The Boys in the Band" became the first American stage production to deal openly and candidly with gay lives, over a year before the Stonewall Riots, died March 7 at age 84, from complications following heart surgery after suffering a heart attack. Without "Boys," other breakthrough gay dramas such as "Torch Song Trilogy," "Love! Valour! Compassion!" and "Angels in America" would have been inconceivable, as its popular success opened doors for honest depictions of LGBTQ people in mainstream theater and films. Its witty, acerbic banter ("Who do you have to fuck to get a drink around here?") became part of gay vernacular. And its portrayal of gay men leading ordinary existences with similar issues such as the search for meaning and love, just like their straight counterparts, helped spur acceptance of queer folk in the prevailing cultural landscape.

Crowley was born in Vicksburg Mississippi, his father an alcoholic and his mother a drug addict. He later joked that Eugene O'Neill had stolen all his personal material for future plays. He found refuge in movies, realizing any chance for happiness lay in getting out of that bigoted city pronto. Graduating from Catholic University of America with a degree in theater, he moved to Hollywood to become a screenwriter. Instead he found employment as a gofer to director Elia Kazan, meeting his lifelong friend actress Natalie Wood on the "Splendor in the Grass" set. He later became her personal assistant. He wrote several television scripts, including an unsuccessful pilot for "The Bette Davis Show."

Despite being a mainstay in the gay Hollywood party scene, by 1967 he was unemployed, broke, drinking heavily, and depressed. He read a now-notorious, homophobic article by New York Times drama critic Stanley Kaufmann, who claimed the three most successful playwrights (the unnamed Tennessee Williams, William Inge, and Edward Albee) were gay and masquerading homosexual themes through their stand-in straight characters. He suggested gay dramatists write about their own issues directly. Having reached a professional dead-end, Crowley embraced Kaufmann's challenge, feeling he had nothing to lose. While housesitting for actress Diana Lynn, he wrote "Boys" in five weeks, with its simple plot of friends meeting for a birthday party to honor one of their own. Crowley envisioned it as a gay version of "Who's Afraid of Virginia Woolf?"

With the help of an agent through Wood, "Boys" opened Off-Broadway at Theater Four. It became an immediate sensation, drawing luminaries like Jacqueline Kennedy, Marlene Dietrich, and Rudolph Nureyev among its straight and gay audiences. It ran for over two years, totaling 1,001 performances, became a hit in London's West End, and spawned two touring companies and a cast album. In 1970, with Crowley as producer and insisting against the studio that it star the original mostly gay/closeted cast (five of whom later died of AIDS, as did its director and producer), "Boys" was transferred into a film directed by the up-and-coming William Friedkin. Stonewall happened in the interim. "Boys" was then criticized as passe, featuring self-hating, drunken, pessimistic, unhappy, cruel gay men with unflattering, internalized homophobic dialogue ("You show me a happy homosexual, and I'll show you a gay corpse"), while the new liberation movement wanted only positive, celebratory images. It became chic to mock the play.

Meanwhile, Crowley wrote several other dramas, including 1992's "For Reasons That Remain Unclear," about sexual abuse in the Catholic Church (he had been molested as a child) a decade before the scandal arose, and 2002's "Men from the Boys," a sequel to "Boys." None were winners. Wood's widowed husband, actor Robert Wagner, made him producer and executive script consultant on his hit 1980s TV series "Hart to Hart." Crowley also stopped drinking.

Enough time had passed that critics started reassessing "Boys," acknowledging the same issues of fear, oppression, shame, and self-loathing still beset LGBTQ people. Also came the realization that these men were a family, comfortable enough with each other to be laceratingly candid, and force each other to confront their fears and lies so they could love themselves. The ending was seen as a denunciation of the closet, having given scores of audience members the courage to come out. It was okay to like "Boys" again, or as director Joe Mantello observed, "The people who criticize the play have the luxury to do so because of the play."

Crowley felt vindicated by the 2018 all-openly-gay star cast Broadway production, which won the 2019 Best Revival of a Play Tony, with Ryan Murphy directing the same actors in the Netflix TV film to be shown later this year. Crowley received a 2009 Lambda Literary award for his "Collected Plays." He lived long enough so that the LGBTQ community recognized "Boys" as the groundbreaking triumph it is, rather than the embarrassment it never should have been.