Sketching a portrait of America 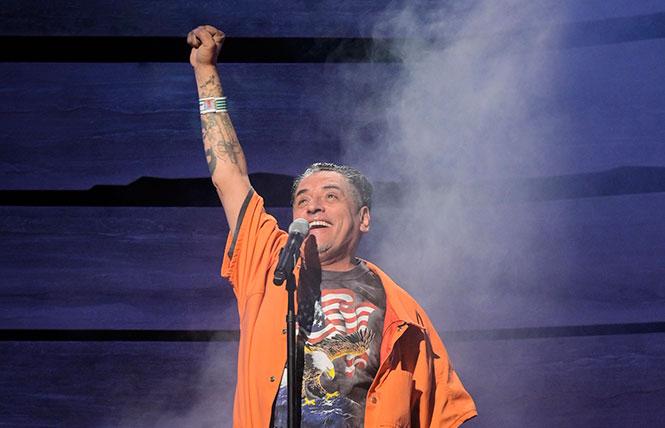 While Culture Clash's body of work includes full-length plays that put Cali-Latinx spins on Aristophanes' "The Birds" and the legend of Zorro, they're best-known for the site-driven format they call "social archaeology," in which they conduct and record interviews with real people around the country to generate material for comedic sketches. The exaggerated but pointedly detailed characters — of multiple ethnicities and genders — that emerge from this process speak both directly and allusively to hot-button social issues, including immigration, assimilation and racial prejudice. "(Still) in America" is a primarily a grab-bag of slightly retooled highlights from several of those productions.

The kaleidoscope of characters on display include a cheery straight Miami couple who have diverging political views, African and Filipino men at their U.S. naturalization ceremony, a proud Muslim-American father who senses his kids are losing touch with their roots, two senior-citizen hippie ladies reminiscing about the 1i960s and lighting up the ganja, and, alas, that staple butt of unsubtle comedy, the African American revival preacher. The trio is undeniably funny, impressively adept with accents, Silly Putty facial expressions and the interpersonal chemistry of longtime collaborators who still genuinely like each other. At several points during their opening-night performance, the guys seemed on the verge of cracking up and breaking character, reminding me of the giggle contagion that ran rampant on the old Carol Burnett television show.

As Carol Burnett reruns evoke warm memories for me, "(Still) in America" will likely delight longtime Culture Clash fans. But for newcomers to the troupe, the compilation format feels a bit thin on substance. Highlight reels work most effectively for those who have seen the original works being showcased. Instead of seeing a series of sketches set within a single geographically defined community, as they were originally intended to be presented, we jump all over the map. On the night I saw "(Still) in America," the biggest laughs came when the humor hit close to home. The audience roared in response to precise comic jabs at Orinda, Antioch, Berkeley and Vacaville. But the depth and complexity that come from looking at a single area from multiple angles are largely sacrificed in the show as a whole.

Culture Clash and director Lisa Peterson seem to want this career-spanning collection to transform the group's snapshot photo albums from individual American communities into a mural-scaled portrait of the country as a whole. Their aspirations are handsomely spelled out by Christopher Acebo's sleek, simple set, a rich, red-lacquered platform stage in front of a massive revamped American flag with stripes in a full spectrum of vibrant colors. But in trying to convey the essence of a nation, they've taken on too big a turf.