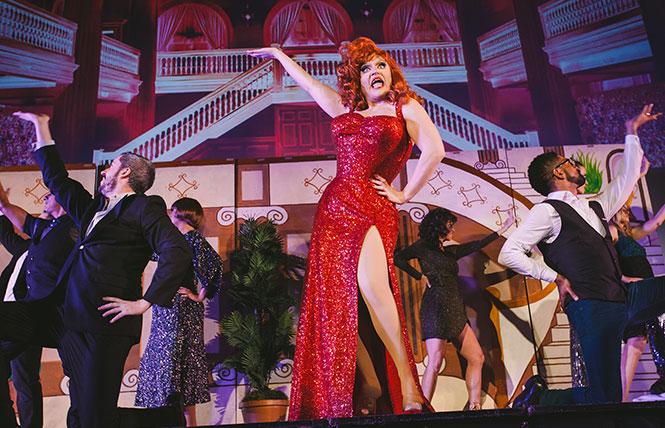 Scene from a 2018 production of "Drag Becomes Her," coming to the Castro Theatre. Photo: Sloane Kanter

[Update, 3/12/20: "Drag Becomes Her" has been postponed due to new state guidelines issued by Governor Gavin Newsom Wednesday that public events of 250 people or more be canceled or postponed due to coronavirus.]

Drag superstar Peaches Christ and a few of her closest friends will once again bring a movie classic to the stage of the Castro Theatre, on March 14. "Drag Becomes Her," a mad satire of the Meryl Streep/Goldie Hawn supernatural comedy "Death Becomes Her," promises to leave audiences in stitches. First released in 1992, the movie has developed a cult following over the years, and it's particularly popular with LGBT audiences.

Real-life best buds BenDeLaCreme and Jinkx Monsoon, both "Drag Race" alumni, will star as Helen and Madeline, played by Hawn and Streep in the film. Drag legend Heklina will appear in a male role, Ernest, played by Bruce Willis in the movie. Christ will be seen as Lisle, the mystery woman who gives Madeline and Helen a magical potion that gives them eternal youth and eternal life.

"Death Becomes Her," which won the Academy Award for Best Visual Effects, features a number of tricks that will be most difficult to recreate in a stage show, such as Streep walking around with her head on backwards after a fall down a flight of stairs, and Hawn sporting a huge hole in her body after being shot. Neither of them can die because of that potion.

"We use a combination of physical comedy with good old-fashioned stage effects and illusions," said Joshua Grannell, the out-of-drag alter-ego of Peaches Christ, who serves as the show's writer and director. Grannell saw "Death Becomes Her" in a cinema when it was first released. He admits to becoming obsessed with the film's commercial before it even hit theaters.

"I think the reason it's so popular with queers is because it's the ultimate female version of an old Universal monster movie," Grannell said. "It's gorgeous and Gothic, and the stars are comedic geniuses. Also, queer people love a good bitchy revenge movie, and this absurdist tale has all of that stuff in abundance. I could watch it over and over again, and already have.

"I'll be playing the Isabella Rossellini role, mostly due to the fact that we look so much alike naked," she said. "In our show, my name is Isafella, and I do my best to recreate her mannerisms and vocal affectations. She has such a great accent and camps it up so beautifully in the film that I want to honor how far she went to make her performance big."

Christ also gives high marks to Heklina's appearance out of drag. "This is her biggest acting challenge yet, playing a man," said Christ. "But the fact of the matter is, she does it quite well. This is the second time Heklina has done a male-presenting role in one of my shows. She was also Uncle Fister in our 'Addams Apple Family Values' show, and she was fantastic. I think people will be impressed with how funny she is as Ernest."

"Everything's drag, right?" Heklina said of her male role. "I actually am convinced that this is an ongoing plot by Peaches Christ to only give me the most unflattering roles in her shows. Uncle Fester, the grandmother in 'She Devil,' Bruce Willis, it really is sinister."

Heklina has her own views as to why "Death Becomes Her" appeals to gay viewers. "It deals with topics of aging, beauty, rivalry and revenge in a very campy way," she said. "The dialogue is hilariously catty and bitchy, and the characters of Madeline Ashton, Helen Sharp, and, as portrayed by Isabella Rossellini, Lisle, seem almost custom-created to be re-imagined by drag queens."

Christ is very happy with the casting of BenDeLaCreme and Jinkx Monsoon. "Jinkx is a huge fan of 'Death Becomes Her,' like obsessed, so I know she's been practicing her Madeline performance privately so she's playing the Meryl part naturally," Christ said. "DeLa is playing the Goldie part, but really the way the show is written, they're actually playing themselves."

Christ described the friendship between DeLa and Monsoon as a sweet and nurturing sisterhood with a little competitiveness thrown in. "After DeLa went on 'All Stars,' it seemed like the perfect time to write a parody centered around their own relationship as queens. I'm really happy how it came together."

Christ promises fans of the film will not be disappointed, even though the stage show might be a little different from the film. which will not be shown.

"The show is actually about Jinkx and DeLa, their friendship and jealousies through the world of 'Death Becomes Her,'" Christ said. "So it will have all the stuff that fans of the movie are looking for, but will also allow the queens to be themselves with some surprise musical numbers and stuff that's not from the film."

"Watch the film, then come," added Heklina. "Even if you've not seen the film, you'll love it!"