'Gloria' at ACT: Identities under fire 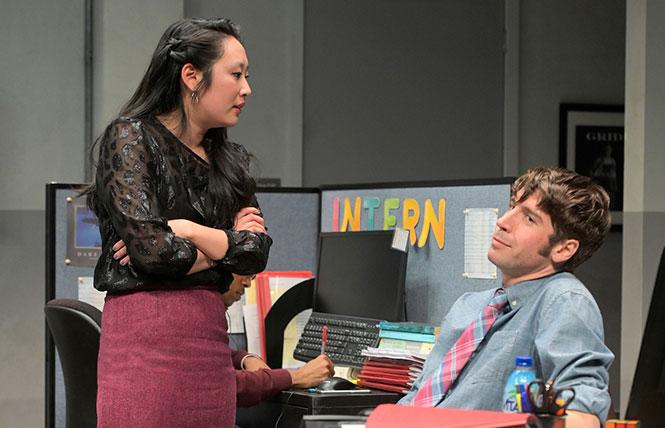 If you relish daring, smartly written, sharply performed theater that digs into the pith of contemporary American culture, you'll be positively blown away by Branden Jacobs-Jenkins' sometimes harrowing workplace drama at A.C.T.'s Strand Theater. But if you're the type of theatergoer who might ever avoid a show based on an unspecific trigger warning — and I hope you're not — "Gloria" is a skipper.

The play starts out harshly funny, like an espresso-infused version of "The Office" with neurotic, overambitious New Yorkers instead of sweet-hearted doofus Scrantonians. It gets harsher and incredibly ugly all of a sudden, then stays that way. "Gloria" doesn't unfold like it does because Jacob-Jenkins or director Eric Ting, who masterfully modulates the script's shifting tones, is after a cheap thrill, but because they aim to shock audiences into empathy with characters they might normally feel dismissive toward.

You may initially gravitate to the overworked underlings at the Condé Nast-y magazine publishing company where the play begins. Or, with a twinge of guilt, you may relate to the witty, self-protective snark of the mid-level players. You won't want to see yourself in the Wintourish overlords, but you may ultimately recognize their undeniable ingenuity. Your feelings about almost everyone will be turned inside-out.

As much as I personally dislike the practice of theaters issuing trigger warnings (refusing to encounter a provocative piece of art is denying your power to process your emotions, not to mention the necessity of doing so), I object even more to censoring reviews based on spoilers. If a play's effectiveness is dependent on surprise plot twists, it's not usually a very good play. In the case of "Gloria," plot twist leads to paradigm shift. It's not simply sprung on us that a good guy is actually a bad guy or vice versa. The entire play is spun on its axis.

"Gloria" would still be well worth seeing if I ignored A.C.T.'s request to stay mum, because it's an intellectually rich piece of writing full of ideas about personal narrative, media-driven desensitization and mental health. But the play demands to be felt through as well as thought through. It asks audience members, along with the characters, to feel what it's like for reflex and reflection to be confusingly, overlappingly engaged.

The cast of six, each playing more than one character, is cross-the-board extraordinary, with Jeremy Kahn and Melanie Arii Mah particularly impressive at peeling apart the onion-skin layers of their surprisingly complex primary roles. Lauren English plays two characters who, while diametrically opposite at one level, each take powerful control of their own stories. Let go, and let "Gloria" put a new spin on yours.