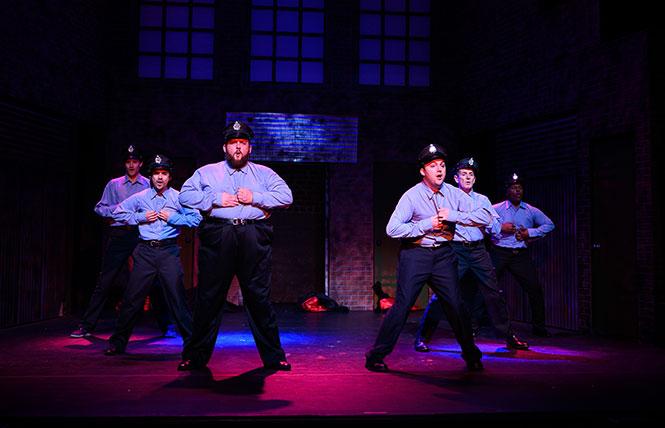 Scene from the Bay Area Musicals production of "The Full Monty" now at the Victoria Theatre. Photo: Ben Krantz Studio

Some of the most compelling performances in Bay Area Musicals' crowd-pleasing production of "The Full Monty" go unseen. I don't mean the Free Willy finale, in which the show's sextet of leading men really do drop trou, maintaining a modicum of discretion only through lighting director Eric Johnson's split-second timing. I'm talking about the all-in, balls-out bravura of music director Jon Gallo and the five-piece combo he leads through composer David Yazbek's grab-you-by-the-collar score. From an offstage perch out of the theater's sightlines, they ace the punchy rock and R&B vernacular that these songs are built for. Throwing themselves into the music with palpable heart and enthusiasm, the band had this viewer beating a rhythm on his knee and shimmying in his seat during several numbers over the course of the evening.

Hold that thought for a moment. Actually, hold it until May, and consider it in relationship to a more recent Yazbek score when "The Band's Visit" plays the Golden Gate Theatre. That sinuous, Middle East-inflected music, all smoke and whisper, is just as accomplished than (and radically different from) the "Monty" tunes. If Yazbek's name doesn't register with you (or if you muddle him in your mind with the celebrated Broadway actor-dancer Tony Yazbeck), it may well be because he so generously disappears into each project he works on. A collaborative ventriloquist, Yazbek seems intent on generating a sound ideally suited for each show's milieu rather than employing a signature style that stands out like Sondheim's or registers like Rodgers & Hammerstein's.

This bespoke craftsmanship may not be in sync with our era's penchant for personal branding, but from an audience member's perspective, it makes each Yazbek show, when they're mounted as effectively as director/choreographer Leslie Waggoner has done here, feel singular and very much alive. They're not aiming for an established canon, they're shooting high and sparkling like fireworks, not all commercial smashes, but very much worth seeing. Catch them when you can. In addition to "The Full Monty" and "The Band's Visit," Yazbek has been represented on Broadway by "Dirty Rotten Scoundrels," "Women on the Verge of a Nervous Breakdown" and "Tootsie." All five were Tony-nominated for Best Original Score.

Based on the charming 1997 British film and transplanted to Buffalo, NY, "The Full Monty" follows six long-unemployed steel-plant workers as they concoct a Chippendale-style striptease act in order to earn money and regain some self-esteem. It's the latter aspect of this motley crew's efforts, the soul stripping, that makes the show compelling. Terence McNally's book lightly riffles through a wide range of issues — father/son relationships, materialism, body image, industrial decline, and prejudices about race, gender and sexuality — without ever sinking into preaching or mawkishness.

But it's Yazbek's score and a fine cast's delivery that keep the show from merely ticking the boxes on a predictable list of social ills. The songs infuse a sense of swelling, rough-hewn and emotional depth into the characters. When ringleader Jerry (James Schott), best bud Dave (Chris Plank) and depressed, closeted gay colleague Malcolm (Jackson Thea) croon the mock singer-songwriter ballad "Big Ass Rock," Yazbek's black-humored lyrics about suicide counter the sweetness of his melody, underscoring the guys' discomfort with their own emotions. But when Plank gleefully flashes a heavy metal devil-horns gesture, Horse (Albert Hodge) rips his way through the deliriously appealing James Brown dance pastiche "Big Black Man," or all six guys find the lyrical safe space of sports metaphor in "Michael Jordan's Ball," they tap into a gregarious, unfinessed energy rarely captured in musical theater (a world in which gay men often drive the aesthetics). There's a song called "The Goods" in which women's breasts are saluted as "bodacious funbags" in a way that comes off as more earnest than offensive.

Four strong female characters not only temper the men's tomfoolery, but also revel in their own playful, sometimes juvenile carnality. Among them, Adrienne Herro, playing a wife who is terribly misperceived as a golddigger, performs "Life With Harold" with infectious, high-kicking Chita Rivera gusto. Brie Pomerantz, as overweight Dave's steadfast partner, provides a palpable emotional throughline from the first scene to the last. Over the course of the show, two of the dudes, Thea's smooth-crooning Malcolm and Stephen Kanaski's frisky sparkplug Ethan, slowly slide into a romance that feels organic, unforced and is pleasantly underemphasized relative to the straight characters' marital struggles.

For about five years now, a music-theater version of "Magic Mike" has been in the works, because some cabal of marketing geniuses thinks a single Broadway adaptation of a male stripper-themed movie just isn't enough. But it is. And it's "The Full Monty." Roll out a San Francisco welcome mat for BAM and David Yazbek. And chant "Ta-ta!" to Channing Tatum.