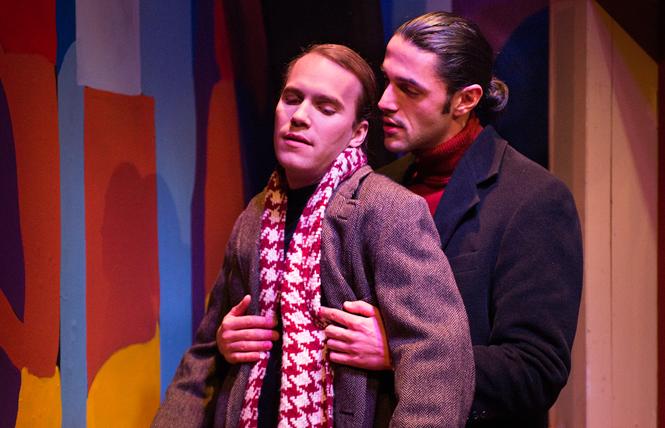 Last year's Broadway production of "The Boys in the Band" was filmed for release on Netflix sometime in 2020. My money is on June, which is Gay Cliché Month. Mart Crowley's black-comic boiling pot of gay self-loathing and bitchery is certainly worth a look, both for its "How far we've come!" effect and its cast of handsome Dans, including Zachary Quinto, Matt Bomer, Jim Parsons and Andrew Rannells. But darling, really, it's the Evil Queen of Time Machines, originally mounted back in 1968 and with scant relevance (other than historical) to younger queer audiences.

For a genuinely up-to-date take on urban gay men's friendships and failings, you can thank the New Conservatory Theatre Center for cultivating New York playwright Ryan Fogarty's "You'll Catch Flies," now playing in a world premiere production. Fogarty clearly draws on "Boys" as a model, building his plot around a gaggle of pals, old and new, who over the course of a single drunken evening expose personal histories, mysteries and jealousies, culminating in the aftermath of a telephone game.

In "Boys" the game involved calling up first loves and confessing one's ardor. In "You'll Catch Flies" (an unfortunate glory hole of a title) Fogarty swaps out rotary dials for today's far more dangerous devices, capable of video recording, Google searching and social media shaming. As intimate as any gathering may feel these days, there's really no such thing as a private party.

The assembled gentlemen of "You'll Catch Flies" include party hosts Dev (Devon Marra) and Smitty (Sal Mattos), who are struggling with the openness of their relationship and differential between their incomes; guest of honor Marcos (Vaho), back for a visit after moving to Spain; and J (Chris Steele), who carries a long-burning torch for Marcos. Arriving late is Marty (Robert Kittler), who has recently reconnected with his birth parents who accept his sexuality in a way his adoptive parents never have, along with Cory (Max Seijas), Marty's newfound gay biological brother. Misassumptions, flirtations and recriminations ensue.

As Dev, Marra is particularly effective, masking deep insecurity with acidic, petulant wit. This is not an unfamiliar character, but Marra is careful not to overplay the verbal cattiness, and bends into revealingly self-soothing postures when situations get tense. Seijas, abashed in a roomful of strangers, and Kittler, a model of earnest fraternity, make for believable brothers. The rest of the cast is solid and engaging, but Fogarty hasn't written quite enough distinctiveness in their voices to make them stand out as individuals rather than a collective expression of contemporary 30ish gay men.

While Fogarty's characterizations could be a bit sharper, he's terrific with a cutting bon mot. "Nice gays finish — quickly" zings one of the boys. "I like the cut of your glib," retorts another.

Director Tom Bruett does a nice job of modulating the script's somewhat unbalanced blend of psychological probing and soap opera sheen. In this first production, the play is stronger on structure and storytelling than credibility, but "You'll Catch Flies" is already solid entertainment and promising in its prospects.