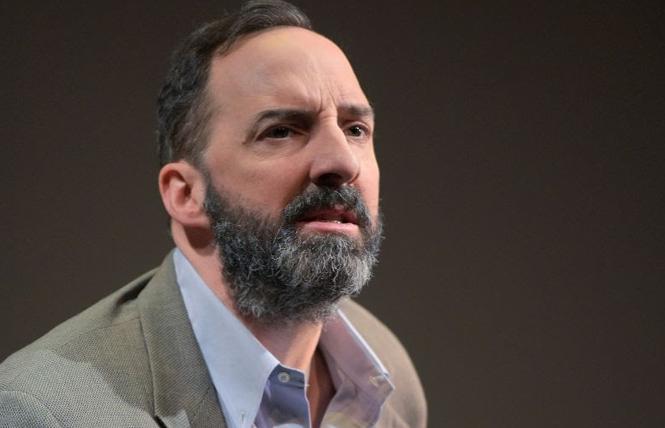 Why did the chicken cross the intersection of Vapid and Ingenious? To get to the ACT production of Will Eno's mind-tickling "Wakey, Wakey" now eliciting laughter and perplexity at the Geary Theater. Your feelings about Andy Kaufman are a good bellwether of how you'll enjoy this show.

A deliciously dry Tony Hale ("Veep," "Arrested Development") plays Guy, an amiable, terminally ill everyman. Directly addressing the audience, he offers some final thoughts in a presentation that, while earnest from the character's point of view, has been mischievously written by Eno as a jumble of tangents in search of coherence.

Referring to notes on a deck of index cards, Guy attempts to share some hard-earned "life lessons" with a PowerPoint deck embellished with clunky, sometimes mis-cued video and audio snippets. It all feels awkwardly, almost embarrassingly familiar. Impending mortality looks pretty much like another day at the office. "People talk about matters of Life and Death," observes Guy, "but it's really just Life, isn't it?"

In fact, the only after-death experience Guy describes in this 80-minute mostly-monologue (Hale is briefly joined by Kathryn Smith-McGlynn as a caregiver) takes place among the living: the sense of being steered and nudged along by a late mentor. Eno slips such glints of profundity into an overall atmosphere of absurd mundanity. Attentive audience members will catch their sparkle, others will miss them and yawn. There's a life lesson in that.

Directed by Anne Kauffman with a gentle hum of the surreal, "Wakey, Wakey" revels in contradiction, repeatedly pulling the rug out from under itself. This begins with its title, which evokes rising, shining and dying all at once. Guy's last words are our own Living Wake-Up Call. In the first moment of the show the lights suddenly go up on Guy, prostrate on the stage, shirtless in pajama pants and slippers. He moans. Blackout. The lights go up again, and Guy is seated, nonplussed, in a wheelchair, with a dress shirt and sportscoat tidying up his look. "This was supposed to be something else," he says. "This was going to be a whole different thing."

Perhaps you were expecting a more conventional play?

Then he prattles on elliptically for an hour, coughing and growing weaker, sharing stock photos of babies, a funny YouTube video of screaming animals, a projected meditation mandala and lots of silly self-help platitudes you could have written yourself with no help whatsoever. So much for the sage advice of the dying.

Yet there's a universality to Guy's pabulum that's strangely comforting. It's the balm of a sham that, to some extent, we've all bought into; the soothing, circular logic of 'It is what it is,' and, 'Be kind to one another.' On the way out of the theater, audience members are offered keepsakes, including rubber bracelets embossed, 'Why not? Why not?' and buttons that read, 'I was there. Now I'm here.'"

There's a sublime moment in the show when Guy projects a word-scramble puzzle onto his screen. The audience, recognizing a familiar form, leans forward, eager to engage. "City of Light" reads the clue, atop the letters S I R A P. There's an animated unscrambling: PARIS! Then the screen is overtaken by celebratory fireworks. We laugh at the silliness, but despite the game's softball stupidity, our pleasure-seeking brains reflexively tell us to feel good about figuring it out. With "Wakey, Wakey," Eno offers up puzzles that are far more challenging, and points out the emptiness of easy answers.