Immigration & the agony of success 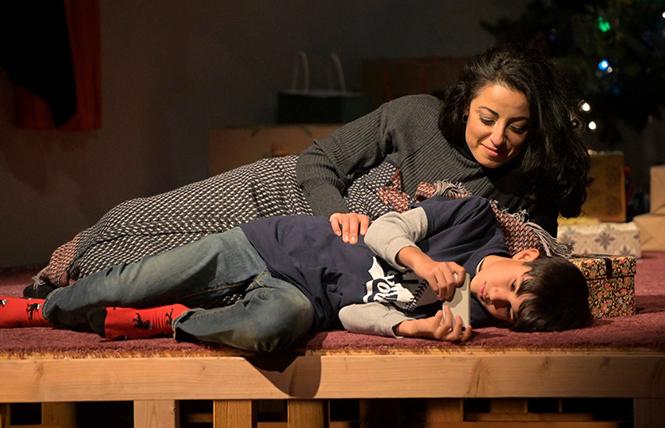 The noisy, noxious anti-refugee arguments that have billowed like mustard gas through American political discourse in recent years simplistically suggest that merely entering the U.S., let alone gaining citizenship, is an instant jackpot, showering impoverished new arrivals with an unearned cascade of fiscal benefits while threatening native Americans with job loss. Threats of violent crime and terrorism are booster shots to this essentially dollar-driven venom.

The gut-punching production of playwright Heather Raffo's densely layered "Noura" now at the Marin Theatre Company (co-produced by Golden Thread Productions) provokes from a different perspective. An unlikely but highly engaging hybrid of political theater and kitchen-sink drama, the play focuses on a formerly well-to-do couple that has made wrenching sacrifices — some financial, but mainly otherwise — in choosing to unsettlingly resettle in the United States. It's a story that refuses to reduce immigration to a matter of economics or to imply that just getting into America provides an inherently happy ending for refugees.

It's Christmas Eve when we meet Noura (Denmo Ibrahim) and Tareq (Mattico David), an Iraqi couple who have been living in New York for eight years, having witnessed and fled the onset of ISIS' bloody destruction of Mosul, along with their son Yazen (Valentino Herrera), now a tween.

Noura was a rising young architect in Iraq. Now unemployed, she continues to draft plans for utopian family communes at her dining table-cum-desk where Yazen also does his homework. Tareq, who had been a surgeon, works as an emergency room medical assistant, but only after a period of swallowing his pride to make sandwiches at a Subway, the job he first held after arriving in the U.S. Lying on their table along with Noura's drawings and Yazen's schoolbooks are the family's long-awaited (and for Noura, secretly dreaded) new U.S. passports, on which Noura is rechristened Nora, Yazen becomes Alex, and Tareq is Tim.

A twinkling tree looms large, taking up precious space in the family's cramped apartment, a pointed visual juxtaposition of religious freedom and creature comforts. In making her main characters Christian, playwright Raffo slyly triggers a chain of prejudice-undermining provocations: Wait, these brown-skinned Iraqi refugees aren't Muslims? Do folks like these deserve a kinder reception from caring American Christians? But aren't most of the Latin Americans seeking refuge in the U.S. also Christians?

There are other Christmas twists: As Yazen prepares to play a frankincense-bearing wise man in their church pageant, Noura tells him that the costume he's been provided looks like something from Disney's "Aladdin," then proudly drapes him in an authentic Middle Eastern shawl. A pregnant unmarried stranger arrives in town. And in a nod to O. Henry's "The Gift of the Magi," we glimpse two profoundly heartfelt gifts: Noura has sketched a dream house for her husband, and Tareq has gone to great lengths to acquire a digitized version of the beloved Arabic book collection his wife left behind. These presents are never exchanged due to a series of harrowing late-in-the-game reveals that take this tale of Iraqi immigrants into telenovela territory.

Both Raffo and director Kate Bergstrom let go of the cleverly allusive filigree of the play's first two-thirds in concluding scenes that boil over with unbuckled emotions and passionate speechifying. Ibrahim and David allow aspects of Noura and Tareq that have been restrained for not just the duration of the play, but for the past eight years, to erupt from beneath the diligent, capable veneers they've long maintained to assure the family's survival and success in a foreign country. Rather than a happy ending, the arrival of their new passports, with their implication of new identities, summons the rage of suppressed loss. Their performances roar and rage as long-held secrets don't so much spill as tsunami. But while the acting is pure thrill, the number and variety of traumas that are condensed into these explosive screeds can feel as overwhelming to audience members as to the characters themselves.

That said, Raffo isn't obliged to tie up her refugee Christmas story with a bow. While her acute wit and intellect are extremely rewarding, audiences may learn just as much from her more ragged depiction of immigrants' inchoate pain.