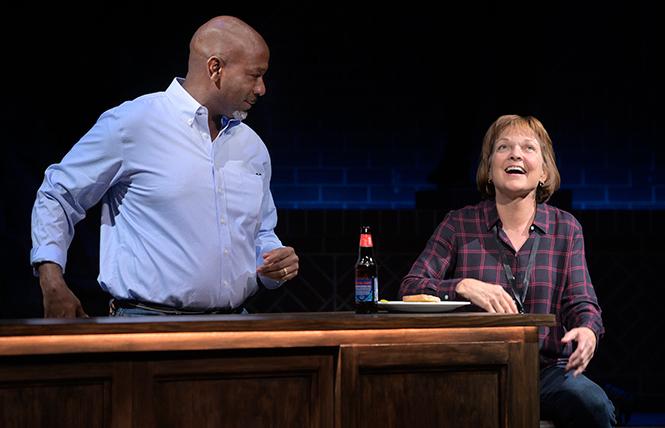 Several times in the days before I attended a recent performance of Sarah Ruhl's new play, now in a world premiere production at Berkeley Rep, I mistakenly referred to the show as "Becky, Witch of Salem." Its title and main character is actually "Becky Nurse of Salem." She's a fictional descendant of Rebecca Nurse, one of five real women hanged for witchcraft in the famed trials of 1692.

When the play opens, Becky works as a tour guide at the Salem Museum of Witchcraft. She's quickly fired (condemned!) for veering from her institutionally sanctioned docent spiel to offer corrective interpretations of the colonial hysteria. Most Americans' understanding of the witch trials, she points out, owes as much to a work of fiction, Arthur Miller's play "The Crucible," as to the historical record. To recap: In Ruhl's script, Becky goes off-script to suggest biases within Miller's script.

Now fold in the fact that "The Crucible" was partly intended as a condemnation of Senator Joe McCarthy's red-baiting 1950s "witch hunt"; sprinkle on today's use of "witch hunt" by the Warlock-in-Chief and his defenders (when Becky Nurse is arrested for stealing from the museum, Ruhl has a crowd chant, "Lock her up!"); add major plot-points about the poisonous impact of the opioid epidemic in contemporary Salem; and you've got one crazily bubbling cauldron of political-epistemological brew, no eye of newt necessary.

Does it taste a bit muddy? For sure. But "Becky Nurse of Salem" tickles with its fizzy ambition. And it's often laugh-out-loud funny. With some judicious trimming, it's likely to join Ruhl's similarly fresh and clever "Eurydice" and "The Clean House" as a staple of regional theater. Meanwhile, Bay Area audiences can revel in the brainy excess of the current script and delight in director Anne Kauffman's generally first-rate production.

Pamela Reed is crusty, brown-bread perfection as Massachusetts grandma Becky. She helps us recognize the dignity, passion and sacrifice of a working-class high school drop-out with a flawless R-less accent and curmudgeon's repertoire of sour, screwed-up facial expressions that ultimately crack open to reveal a yeasty but tender interior. She deploys humor as armor, scrappily soldiering on protecting herself from further disappointments while mourning her late daughter and raising her troubled but impressively resilient teenage granddaughter (Naian Gonzalez Norvind, who, with relatively few lines, shows tremendous character growth over the course of the play). Excellent, shaded performances are also turned in by Elissa Beth Stebbins as Becky's initially elitist boss and Ruibo Qian as a slippery, crystal-dispensing, self-declared modern witch. The play's male characters are all a bit underwritten, but Adrian Roberts is affecting as Bob, a bartender and Becky's lifelong crush.

Louisa Thompson's multi-functional mannequin-filled museum set underscores Ruhl's blurring of past and present, imagination and reality; and sound designer Mikaal Sulaiman employs a vaudevillian instrumental version of "I Put a Spell on You" to keep things light and lively. (The same song was featured in the Bette Midler witch comedy "Hocus Pocus.")

"Becky Nurse of Salem" may still need a bit of doctoring, but it crackles with wicked intelligence.