They got the beat 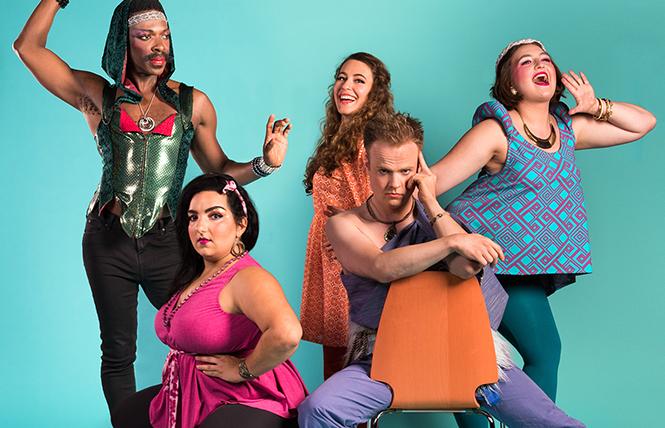 The best thing about the new Go-Go's-songs musical comedy "Head Over Heels," now playing the New Conservatory Theatre Center, is that it isn't a jukebox musical at all. We get all the Go-Go's greatest hits without the Go-Go's rags-to-riches story. "We Got the Beat," "Our Lips Are Sealed" and "Vacation" are timeless pop songs, and it turns out they don't need to be tied to any musician's biography.

Instead these rock-out tunes are used in the service of another of those fractured modern fairy tales, and the nice surprise is how well they fit the ribald proceedings. The concept and book by Jeff Whitty are based on a 16th-century pastoral romance by Sir Philip Sidney (adapted by James Magruder), but very loosely we presume, as the plot complications include several convincing invocations of Sapphic love, boy/boy and girl/girl couplings in the ensemble, and a shepherd boy who gets to experience his feminine side as an Amazon warrior, then decides that he rather likes shading into a she.

That versatile herdsman Musidorus, delightfully played by Scott Scholes, gets to sing with his sheep the show's best love anthem, "Mad About You," which strictly speaking was not a Go-Go's song at all but is from the band's frontwoman Belinda Carlisle's first solo album. He is matched in his ardor by the object of his desire Philoclea (Kimberley Cohan), powerhouse princess Pamela (Ella Ruth Francis), her lesbian love Mopsa (Danya El-Kurd), king and queen Basilius (William Giammona) and Gynecia (Stephanie Temple), and courtier Dametas (David Bicha). Showstopping numbers go to the powerful oracle Pythio (Rotimi Agbabiaka), whose pronouns are non-binary plural and who wants to know, "How is gender germane to the discussion?" The principals are rounded out by an excellent ensemble of spirited, lithesome chorus beauties of all genders (Casey Anne Apregan, Abigail Campbell, Daniel Cancel, Ciara Carvajal, and Jake Daniel Leahy).

The show, well directed by Ed Decker with musical direction by Mark Dietrich, has choreography by Rick Wallace, costume design by Wes Crain, lighting design by Chris Lundahl and scenic design by Sarah Phykitt. All do excellent work here. Go and enjoy this delightful production!