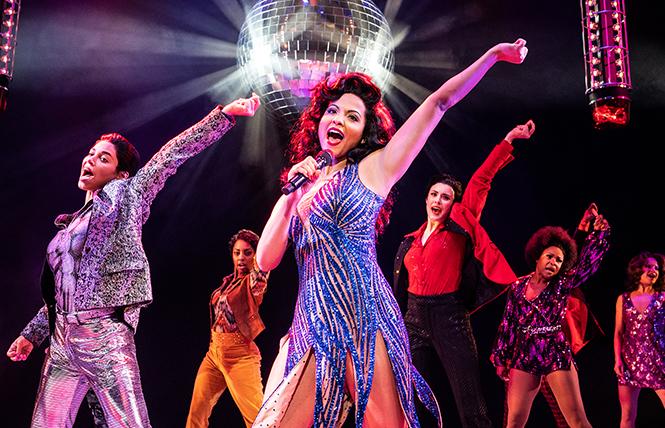 "Summer" has arrived at the Golden Gate Theatre, and with it a bumper crop of corn. This is a bio-musical built around music that remains compelling, much more for the reminiscences it elicits from original listeners than for the non-distinct success story of its subject. Undoubtedly, many of the enthusiastic Boomers at last Wednesday night's opening have tales to tell about disco (or Bar Mitzvah) nights when Donna Summer's "Last Dance" either closed out the festivities or ushered in a juicier second act, which perhaps included a 12-inch single of "Hot Stuff" or "Love to Love You, Baby."

Summer, played at varying ages by three actresses in this eponymous not-so-hot fluff, is initially uncomfortable being deemed the Queen of Disco, but eventually embraces the title. As well she should have: Her greatest hits made momentary stars of the everyday people who danced to them, whether in a club or in front of a bedroom mirror; they were the throbbing backbeat to a show about You. But nobody was thinking about Donna on the dance floor.

Summer's most successful music wasn't particularly autobiographical, and most of her biography isn't particularly interesting. It's quite possible that a canny producer could successfully wedge some of Summer's catalog into a half-decent, jerry-rigged jukebox narrative along the lines of "Mamma Mia" or "We Will Rock You" ("Bad Girls," anyone?), but going the bio route of "Jersey Boys" and "Beautiful" proves a dudly decision.

While three writers are credited (Colman Domingo, Robert Cary, Des McAnuff), "Summer"'s lazy book is more like a paint-by-numbers pamphlet. The one-act show clocks in at 90 minutes, remarkably short for a Broadway musical, and revelatory of how little compelling material there was to work with, or how little the creative team cared about digging deep.

And so: Donna Summer was once a child. She grew up in Boston. She found her love of singing and hatred of predatory preachermen in church. Her Dad wasn't particularly domineering. She was discovered in a German stage production of "Hair." Her early career was molded by opportunistic, sexist male managers, producers and recording execs. She wanted to be considered an Artist, not a Disco Dolly! She fled an abusive first husband. He's essentially introduced and dispatched in a single repugnant scene set to "No More Tears/Enough is Enough": Get it? She broke with her money-grubbing record company and signed on with David Geffen. She fell in love (Steven Grant Douglas plays husband #2 , and his resonant tenor makes a duet of "Heaven Knows" with Dan'yelle Williamson's Donna #1 a highlight of the show) and raised a family.

Before ultimately succumbing to lung cancer, Summer becomes a born-again Christian and alienates her gay fans by being totally misunderstood and never feeling even a sprinkle of homophobia. Well, at least that's how estate-authorized "Summer" deals with one of the most potentially dramatic episodes in its subject's career. Instead of using Summer's abandonment by many longterm supporters and her efforts to win them back as a source of genuinely complex conflict, we get a whitewashed, leveraging-AIDS-for-sentiment mea non-culpa.

If you're able to ignore the dialogue and story, there's some great singing to be heard from Williamson and Alex Hairston (playing another Donna), even though many of the songs are brought to a disappointingly short stop, as if they're included primarily to push the buttons on your emotional jukebox. There are also some perfunctory sets, PowerPoint-quality projections, and dreadful dance routines. Imagine "She Works Hard for the Money" in a boardroom with briefcases. Boom! You've got that choreography down. You'd be better off skipping the theater and hitting the dance floor yourself.