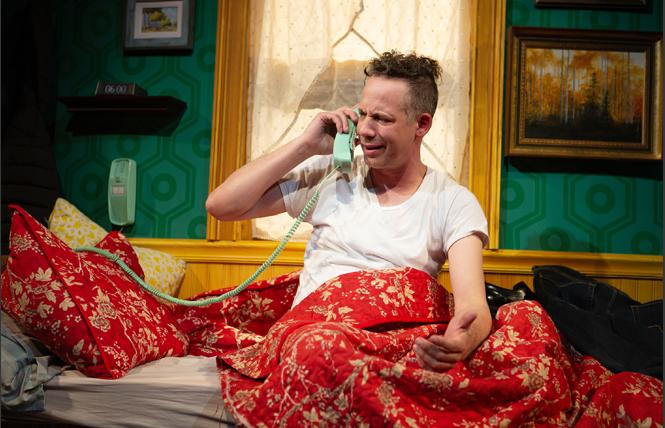 Merry Christmas, it's "Groundhog Day!" Taking a San Francisco-spirited underground approach to seasonal programming, San Francisco Playhouse director Susi Damilano and artistic director Bill English have shrewdly exhumed the critically admired but short-lived recent stage adaptation of the 1993 Bill Murray film about a cranky weatherman caught in an endless loop of curmudge, unable to summon a warm front in his heart. The story is underscored with themes of renewal, reappraisal and spiritual generosity that nicely mesh with the Yuletide season, but given the calendar-shift to Feb. 2, it's blessedly lacking in holly-jolly dreck. It's also blessed with music and lyrics by Tim Minchin ("Matilda"), the sharp-witted British comedian well-known for his anti-religion routines.

The two most Minchinesque numbers in the show are both slightly out-of-left-field set-pieces: "Stuck," which skewers New Age medical quackery; and "Hope," an ironically titled pageant of suicidal ideation. The most beautiful song is "Playing Nancy," a ballad about superficial perceptions of women, delivered in a quietly showstopping solo turn by Sophia Introna.

If these musical highlights sound wildly disparate, that's the secret sauce of "Groundhog Day"'s novel dramatic structure. Like its namesake film, the musical largely moves in an endless loop. Mansplaining meteorologist Phil Connors (Ryan Drummond) wakes up over and over in Punxsutawney, PA, where's he's on assignment to cover the small town's famed annual rodent emergence. "Groundhog Day" is a celebration of theme-and-variation, and at two-plus hours, those variations need to be diverting to keep the audience engaged. As scripted by Danny Rubin and sure-handedly directed by Damilano, "Groundhog Day" manages to be an impressively tight ship while reveling in its own loose cannons.

Beyond Drummond as Phil, and Rina Apostol as Rita, his news producer/love interest, the production's true lead performance is the kaleidoscopic collective effort of a first-rate ensemble of 14, each in multiple roles, as the populace of Punxsutawney. They move in marching-band lockstep to keep the show's time warp tick-tocking through its repetitions, then spike the punch, breaking out into deftly etched individual caricatures — a joyfully juvenile mayor (Michael Gene Sullivan), a stumblebum sheriff (Anthony Rollins-Mullins), a dimwitted innkeeper (Larissa Kelloway) — before falling back into the seamless collective. Choreographer Nicole Helfer, music director Dave Dobrusky, and scenic designer Edward Morris, who has constructed ingenious rotating sets, join forces to create a flowing overall coherence that's strong enough to showcase the show's wackier sidetracks without ever going off the rails.

This is a production in which fundamental discipline allows for dizzy creativity. There's a car chase in this musical! And a green screen. Even a bit of costume-switching legerdemain casually rivals the Potter magic across town at the Curran. Also delightfully casual is the production's racial and sexual diversity. The same-sex couple inconspicuously cutting a rug at the Groundhog Dance caused me to grin from ear-to-ear.

As Phil and Rita, Drummond and Apostol are funny, but more importantly, they bring a sense of central gravity to the show. In the midst of this whirligig, their solidity keeps the silliness from flying out of control. While Apostol is the less robust singer, her performance, when viewed in light of her recent muted turn as the title character in Magic Theater's "The Chinese Lady," is a remarkable demonstration of versatility.

While I'd happily take a Whack-A-Mole mallet to the vast majority of holiday entertainments, SF Playhouse's "Groundhog Day" deserves a Christmas Rodent Tony. Put tickets on your wish list this season.