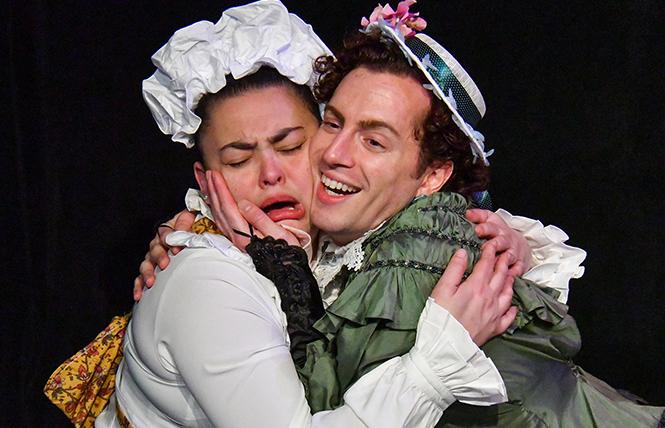 Last Wednesday, I watched the Democratic presidential debate followed by "Daily Show" commentary on the event. I felt simultaneously amused and uneasy when South Africa-born Trevor Noah observed that Pete Buttigieg is "the only candidate Michael Jackson would be into." Between the joke and the teller, it was a moment in which sexuality, history, race and power were unparsably squished together, eliciting both discomfort and laughter.

The next night, I experienced two full hours of similar moments at Custom Made Theatre Company's production of writer Caryl Churchill's career-making 1979 play, "Cloud 9." This poly- and chrono-morphously perverse comic drama splits its two acts between 1880s Africa and 1980 London, and requires some of its cast members to play poetically juxtaposed roles, shifting gender between acts. Indelicately emitting burps that echo across centuries, "Cloud 9" revisits and reframes social injustices with a slightly imbalanced ratio of bawdy humor to philosophical clarity.

Churchill's choice not to specify a country where her generically "Africa"-set first act takes place reveals the overarching attitude of its white colonialist characters, who view the continent and its native inhabitants as a generic darkness to be enlightened — and exploited — by the Queen's empire. Likewise, the adult white male characters assume themselves the rightful sexual masters of everyone they consider lesser than themselves. Women, blacks and children are all at their service, if sometimes begrudgingly.

The scenario parodies Victorian mores in a frantic sex farce centered around the household of orotund British administrator Clive (Evan Winet) and his tremulous wife Betty (Mario Mazzetti, genderbendingly brilliant), both prim and proper on the surface, but hormonally aboil beneath. He's in passionate pursuit of their widowed neighbor Mrs. Saunders (Renee Rogoff), who's interested in him only for casual clitoral stimulation, while Betty simultaneously rebuffs the overtures of her children's governess (also played by Rogoff, whose lightning-fast, cool-as-a-cucumber changes of both costume and carriage are a hoot) and swoons for dashing houseguest Harry (Zoya Kolia), a pith-helmeted hunter-explorer.

Harry, in addition to wetting his wick with Betty, is also having his way with Clive and Betty's effeminate young son Edward (Alejandra Wahl) and manservant Joshua (Alan Coyne), a black character played by a white actor, per Churchill's published instructions. On Act I's sexual sidelines are Maud (Monica Cappuccini), Betty's stiff-lipped mother, willing to overlook her son-in-law for his indiscretions but quick to reprove her daughter; and Edward's baby sister Vicky (represented by a ragdoll, cleverly manipulated by multiple cast members).

It's a century later after intermission, and the show's copious coitus is now complemented by mindfucking: We meet an alternate version of Vicky, now played by Wahl, who previously played her brother Edward, now played by Mazzetti, who previously played their mother Betty, now played by Cappuccini, who previously played her own mother Maud. Still in full beard, Winet (Act I's macho Clive) plays Vicky's pinafored toddler Cathy. Gentle Edward is unstably coupled with Gerry, a compulsive cruiser and resister of domesticity. Vicky is having a lesbian affair with a new character, Lin (Rogoff). Amidst Act II's lively chaos of Wiccan ceremonies, outdoor cruising, open marriages, gay saunas and brother-sister bedsharing, characters from Act I pop up and wander through every now and again, provoking the audience to tease out patterns and parallels in the humid morass. Dr. Ticketholder, the stage is your couch!

Director Allie Moss keeps the themes and action shifting and reconfiguring like a Rubik's cube in motion, effectively conveying Churchill's prismatic vision. Even the playwright's production notes suggest that "Cloud 9" should be handled as a playful puzzle by both producers and spectators. While she specifies that certain roles should be played by opposite-gender actors, Churchill doesn't prescribe which combination of parts will be shared by any specific cast member. So, while Moss elicits profound reverberations by having the extraordinarily talented Mazzetti play a mother, Betty, and then her own son, Edward, other directors have chosen to have the actor who plays father Clive in the first act take on Edward in the second. With sex-change comes subtext change.

For all of Churchill's ingenious creativity, it's disappointing to find the racial issues raised in Act I abandoned in the play's second half. Churchill sinks her teeth into a lot of ideas here, but unfortunately bites off a little more than she can chew. That said, Custom Made's "Cloud 9" is a crypto-comic whirlwind, played with brio by a superb cast. Avid Bay Area playgoers will relish thematic and dramaturgical overlaps with current and recent local productions of "Testmatch," "Bull in a China Shop," and Churchill's own "Top Girls." If you're lucky enough to have seen all three, mix a cocktail of your perceptions to splash around in your head. The buzz will put you on a theater-lover's cloud nine.