Rebel hearts at a women's college 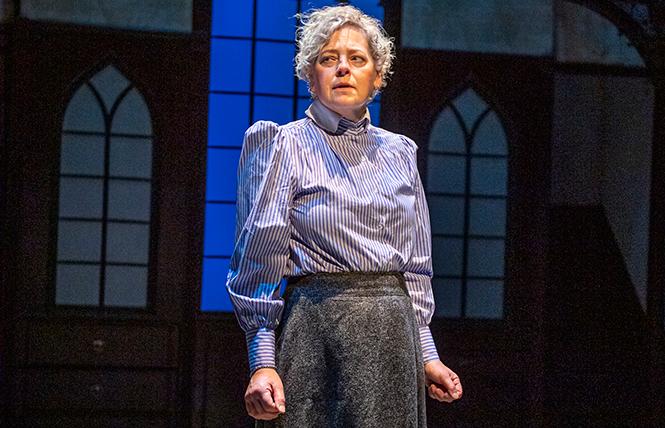 Pugnacious and poignant. The intertwining of these two words aptly describes many a longterm relationship. So it is with Mary Woolley and Jeanette Marks, whose up-and-down coupledom is the thumping heart of "Bull in a China Shop," playwright Bryna Turner's gutsy political romance now on stage in a handsome production at the Aurora Theatre Company.

Woolley was Marks' professor at Wellesley College when the real-life pair first met in the mid-1890s. Turner's play inspired by their story opens in 1901, as they move from Boston to rural Massachusetts, where Woolley, 38, has been hired for the presidency of what is now Mount Holyoke College (then referred to as a "Female Seminary"), and fast-forwards through a highlight reel of their fractious but enduring partnership over more than three decades.

While Woolley (Stacy Ross) and Marks (Leontyne Mbele-Mbong), 12 years her junior, bond over their passionate proto-feminism, the tensions in their relationship are clear from even this early stage. Woolley aims to drive social change as an institutional insider, redefining her era's notions of women's college as an upper-class "school for wives" by eliminating coursework in the likes of domestic science and equestrian studies in favor of serious academic studies of philosophy, political science and literature, akin to what male students of the time might pursue. While Marks benefits by being appointed one of the college's youngest English professors (ultimately chair of the department), she resents moving from the city to the sticks and being asked to live in the shadow of her partner.

In an early, troubling sacrifice to political prudency, Woolley decides that, until a promised President's House is built on campus, she must live apart from Marks, relegating her lover to faculty housing. But Woolley flaunts this official discretion by visiting each night for bedtime affection, then returning to her own quarters. Meanwhile, firebrand Marks' anti-patriarchal pedagogy — which includes al fresco classes, shared cigarettes, and a syllabus highlighted by Virginia Woolf's gender-dismantling "Orlando" — stirs protests from parents and donors, whom Woolley is left to manage.

The couple's biggest conflict comes nearly 20 years later when Woolley cautiously turns down an invitation to speak at a public rally for women's right to vote. In contemporary parlance, theirs is a love story between a career diplomat and a social justice warrior. Along with Woolley and Marks' mutual admiration and sexual attraction (director Dawn Monique Williams orchestrates some gooseflesh-inducing bedroom scenes), their generation gap and differences in activist modus operandi are baked into their relationship.

Decades pass and society convulses — WWI, women's suffrage, Woolley's dismissal from her presidency — but "Bull and a China Shop" is focused on the theme and variations of a couple's life. The spry script and Aurora's punchy staging keep the action lively and the audience on its toes. The dialogue is slap-your-face fresh, peppered with F-words, wisecracks and contemporary slang. Ross and Mbong are both self-possessed and magnetically attractive, swashbuckling their paths forward while unbuckling preconceptions about butch-femme roles in lesbian partnerships. Shiny-eyed Jasmine Milan Williams nearly steals the show as Marks' most ardent pupil Pearl, capturing the angst of adolescence with a pining, pouting fervor.

The play finds horniness in the horns of dilemma and crashes through stereotypes of dry bio-plays. It's a rabble-rousing evening of education in American women's history and universal ways of love.