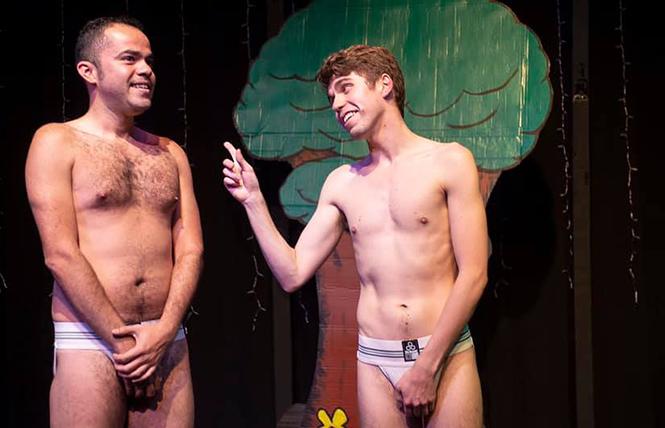 Mikey Conner and Max Seijas in "The Most Fabulous Story Ever Told." Photo; Ashley Tateo

Tenderloin edge meets "Let's put on a show!" pluck in Left Coast Theatre's clothes-shedding, zinger-flinging production of "The Most Fabulous Story Ever Told." An ideal prophylactic against the coming holiday season, Paul Rudnick's Bible-thumping comedy (both Testaments are pretty much beaten to a pulp) was originally produced over 20 years ago, but still packs comedic punch thanks to its timeless targets of organized religion and homophobic bigotry.

In the first of two only-loosely related acts, we meet Adam and Steve, played with goofy, cartoonish, briefly buck-naked glee by Max Seijas and Mikey Conner. You're not allowed to touch their junk, but in the wee, seedy Eden of Eddy Street's Exit Theater, you can practically catch a whiff of perineal perspiration. There's no rib-removal but plenty of rib-tickling as they're joined by their lesbian counterparts: Jane (Jessica Lim), a crunchy granola New Ager, and Mabel (Antonia Blumberg), a bossy-in-overalls Lea DeLaria type. A newfangled, dick-dangled spin on Bible stories ensues, highlighted by a beast of a circuit party aboard Noah's Ark, during which Steve is propositioned by a prominently protuberant rhinoceros played by Byron Guo, precipitating one of several relationship-straining crises among our leading couples.

The evening's second act finds a religiously mixed gang of queer New Yorkers (Christians, Jews, atheists and a Mormon) celebrating a consumerist Christmas along with queer marriage and parenting. Jokes-a-million are thrown at the walls, and most stick. Amidst the barrage of one-liners, playwright Rudnick ("Jeffrey") suggests that we've come a long way, baby (Jesus), but still have plenty of room to grow. Rudnick is never able to keep a straight face for long, and whenever a semi-serious bit of dialogue pops up, it's quickly crowded out by another punchline or auxiliary characters, like a wheelchair-bound lesbian rabbi with a cable TV show and a tinge of Marianne Williamson (Kim Saunders, chewing her way through Christian Heppinstall's sparse but effective scenery), or an off-duty go-go boy (Guo again, adorable again).

Ribald, loose-jointed and playful, this production is a sort of happily subversive queer community theater that's all-too-rare in San Francisco these day. Its handmade feel and upbeat spirit deserve a warm embrace from audiences. It feels genuinely mirthful and uncommercial.