Mandy Patinkin sings from the heart 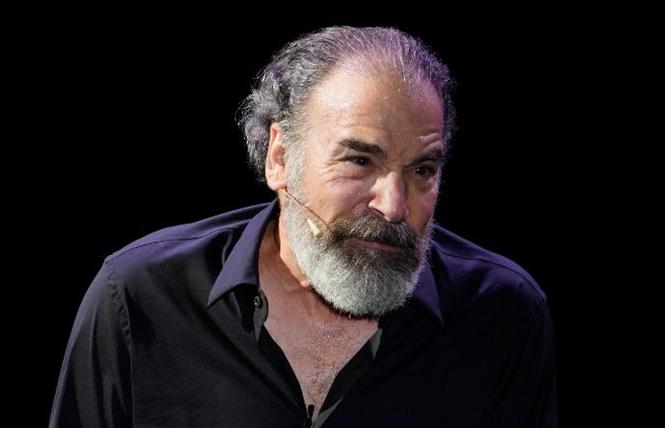 Mandy Patinkin: "If I could only do one kind of performance, it would be doing concerts." Photo: Joan Marcus

Mandy Patinkin is perhaps most widely known to the general public for his role as Saul Berenson in eight seasons of the Showtime series "Homeland." Movie-lovers cherish him for his role as Inigo Montoya in 1987's "The Princess Bride." And Broadway buffs consider Patinkin's Tony-winning Ché in "Evita" and indelible Seurat in "Sunday in the Park with George" among his finest work. But when Patinkin appears at the Sydney Goldstein Theater on Fri., Nov. 22, he'll be doing what he loves most of all.

"If I could only do one kind of performance," Patinkin explained in a recent phone interview with the Bay Area Reporter, "it would be doing concerts. There's no question about that for me.

"The live performance of a song," he said in a rush of enthusiasm, "is particular to a moment. It's particular to how I sing it and how each member of the audience hears it. It connects to what's happened to us in that day and what we feel when it's being sung. It's something that will never be duplicated."

Patinkin was already a Broadway star when he performed his first major solo concert in 1989 at New York's Public Theater. Then, and for most of the next 30 years, his collaborator on concerts, including a celebrated 2011 Broadway run with Patti Lupone, was music director and pianist Paul Ford. When Ford retired in 2017, Patinkin said, "I wasn't sure if I would have to as well."

The aggressive international shooting schedule for the final two seasons of "Homeland" was a useful distraction (the concluding episodes air next year), but as that came to a close Patinkin acutely felt the absence of singing in his life.

"How does the absence of singing manifest itself?" he mused. "It's like all of a sudden you're craving broccoli, or milk, like a pregnant woman. You suddenly realize you're starved for it. There's a sort of addiction, I think to the literal intake and movement of air that oxygenates you when you sing.

"I had just finished nine months of filming, and even when you're on set, there's a sense of disconnection from people. You watch things in a monitor. And of course, when it plays on television, you're not even there to feel any reception of the work."

Through a mutual friend, Patinkin was introduced to pianist-producer Thomas Bartlett, who has collaborated with performers ranging from Yoko Ono and Sufjan Stevens to opera composer Nico Muhly. The pair began an unusual project.

"I was speaking to [author] Larry McMurtry," Patinkin recalled. "We were talking about perfectionism, and how you sometimes need to resist it. I decided I wanted to do a musical diary, where instead of working so much on production, Thomas and I would get together and just record our whole work sessions, and let it be a little messy."

Prior to their first sessions, Bartlett sent Patinkin a playlist of about 300 songs, including "many that I'd never been exposed to before," said Patinkin. "Thomas works with everyone. I listened to them between Christmas and New Year's weekend in 2017, and chose about 20 songs from that 300. That helped Thomas understand what was interesting to me. Through this exchange of songs we learned about each other."

The resulting recordings "Diary: January 27, 2018," "Diary: April/May 2018" and "Diary: December 2018," intimate and eclectic, were quietly released on streaming services with virtually no publicity. A cherry-picked selection of songs from across those sessions has now been officially issued as an album called "Children and Art," but the full sessions are still available online. While Patinkin is widely identified with theater songs and a few Sondheim numbers make the collection, it's remarkable to hear him bringing an actor's sense of characterization and interpretation to a much wider gamut of material, including songs by Rufus Wainwright, Lyle Lovett and Randy Newman.

"These are songs," said Patinkin, "that educate me, make me smile or laugh, or long or remember. I love sharing them with other people. It can be very confusing for all of us to deal with our own raw emotions these days. But we all like the comfort of sharing feelings with our fellow human beings."