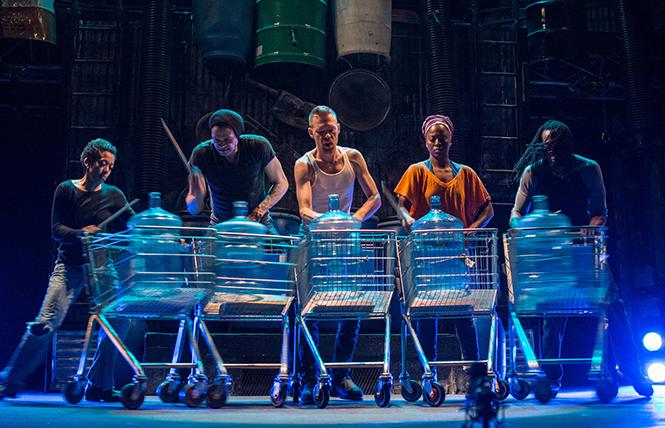 Members of the cast of "Stomp" made music out of water-cooler tubs and shopping carts. Photo: Steve McNicholas

Sometimes you just want to drop-kick a soda can or smash in a water tub. An American President is getting away with pissing on the Constitution in real time, so why aren't citizens marching in the streets? Opiated masses.

But we discovered that being in the audience when talented performers bang on cans and make a rhythmic ruckus can be just as satisfying. "Stomp," the so-called "international percussion sensation," played A.C.T.'s Geary Theater in San Francisco for eight performances last week, and Out There and a lot of vicarious percussionists were in the house.

Created and directed by Luke Cresswell and Steve McNicholas, "Stomp" began as a street performance in the UK 20 years ago. It's been performed in more than 50 countries, in front of more than 24 million people. The show is a combination of percussion, movement and visual comedy. Performers "make a rhythm out of anything we can get our hands on that makes a sound," said co-founder Cresswell. Household and industrial objects find new life as musical instruments, as do select body parts.

As a writer, Out There missed any sort of verbal language in the piece. So here are some good words that describe it: percussive, pneumatic, polyrhythmic, contrapuntal. We missed language, but there is musical language in the drumming of all those paint cans, the fluting of plumbing fixtures and rubber hoses, the slap and brush of human bodies. These "body percussionists" come with impressive physical wagons of muscle and bone, so there's plenty of locomotion involved, and the pleasure of watching the pistons.

"Stomp" has evolved into its own genre. There are four global productions: in New York, London, and on North American and European tours. It can boast an Olivier Award for Best Choreography (London), an Obie Award, a Drama Desk Award, an Academy Award nomination, four Emmy nominations and one Emmy Award (for their HBO special "Stomp Out Loud"), TV appearances including the London 2012 Olympic Games Closing Ceremony, the Academy Awards, "Mister Rogers' Neighborhood" and an international array of commercials. We'll bang on a can for that.