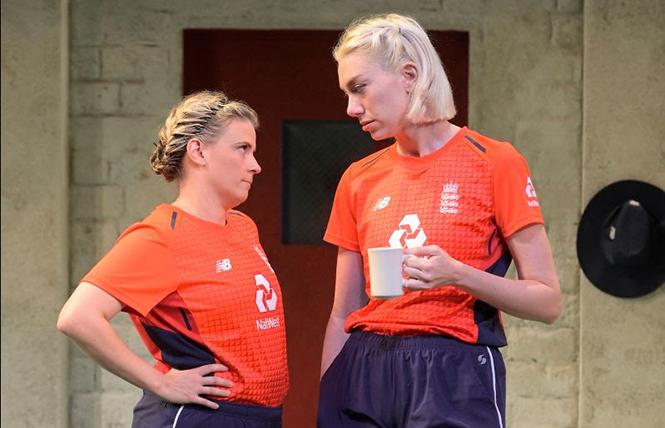 Who's up for a play about cricket? Survey Bay Area audiences about their enthusiasm for the putative subject matter of "Testmatch," now in a world premiere production at A.C.T.'s Strand Theater, and you're likely to hear, well, crickets.

Which is why, in encouraging you not to miss this wildly creative, spectacularly acted 90-minute brain-grenade of a show, I want to stress that it's not a play about cricket. Playwright Kate Attwell's "Testmatch" is about race and gender and global economic power. While there are bats and balls and wickets in evidence (the action shifts from a contemporary women's championship match in England to an East India Company stronghold in colonial-era Calcutta), you needn't understand anything about the sport going into the show. In fact, over the course of the evening, the cricket that comes to mind most is Jiminy, who would be appalled at the unconscionable (and frequently unconscious) behavior on display.

Like the recent San Francisco Playhouse production of "Dance Nation," "Testmatch" takes audiences into a women's athletic environment rarely portrayed on stage. The show opens in the midst of the match. A downpour has led to a rain delay, but the players are still drenched in competitive tension. Stir-crazy members of both teams mill about in a shared lounge, trying to tamp down their instincts for blood sport over chit-chat and cups of tea.

At a time when men's "locker room" talk has been certified a social poison, it's provocative to hear one of the Brits (Arwen Anderson) gleefully objectifying male rugby players and to find India's star rookie (Avanthika Srivanasan) asserting that "we don't have lesbians in small-town India" while her lesbian teammate (Lipica Shah) stands close by.

All of the women athletes in "Testmatch" are incensed at the discrepancies in pay and attention given to them vs. to their male counterparts. We hear about meager sponsorship deals and players' need to work other jobs to make ends meet. The British team captain (Madeline Wise) compromises herself on a slippery slope of economic rationalization, asserting that since the whole of professional sports is so fixed against women, she's willing to take bribes to throw games.

As the rain delay continues and frustrations build, presumptuous references to racial superiority bubble up from the Brits, countered by Indian slapbacks over cultural arrogance and colonialism. British playwright Attwell and director Pam MacKinnon provocatively blur the line between strategic trash talk, meant to intimidate opponents; individuals blowing off steam; and deep-seated cultural prejudices. Is civilization a competition? A game with winners and losers?

These questions are thrown into sharper relief in the play's funhouse-mirror second scene, in which the sterling cast of six each takes on a second role. A few hundred years earlier, two male British exporters (Anderson and Millie Brooks in a delicious Tweedledee and Tweedledum routing) dither about their walled compound, rewriting the rules and regulations of their cricket league, conspiring to hide the fact that their officially approved pitching technique was — horrors! — developed by a woman. They're oblivious to the devastating famine their business has created beyond the compound walls, and dismissive of the ailments suffered by one's wife (Wise again), numbing her down and shutting her up with copious opium.

In contrast to the documentary realism of the first scene, this second section is played with outlandish buffo bravado, underscored by Beaver Bauer's costumes, which serve as punchlines in and of themselves. Anderson's towering powdered wig peaks and curls like a coneful of hairy Dairy Queen.

With this unexpected shift in tone, Attwell and MacKinnon do much more than provide backstory. In an utterly theatrical manner, they demonstrate how easy it can be to distance ourselves from a history that still affects our day-to-day life. Seen alone, the foppish couture, silly accents and broad comedy of this second scene might easily override the audience's perception of the serious topics at hand. But when this folly is played as a palimpsest over our fresh awareness of the contemporary scene, history's impact can't possibly be laughed off or dismissed as long ago and far away.