Ganache-ing my teeth: 'The Cake' 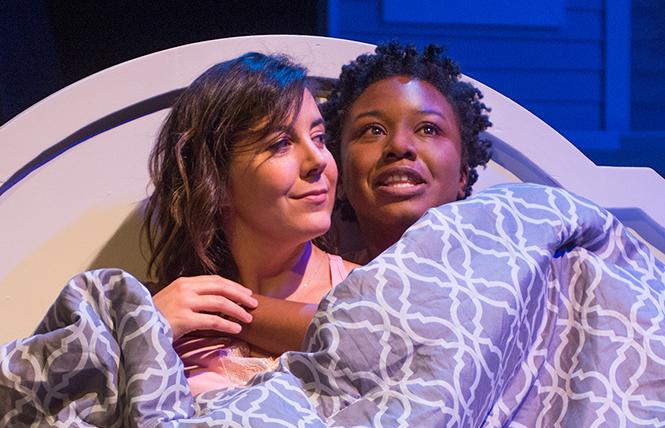 "You've got to follow the instructions," explains Della, the cheery proprietor of a small-town North Carolina Bakery, sharing her philosophy in the opening moments of "The Cake," now at the New Conservatory Theatre Center, through Dec. 1. From Della's perspective, this means sticking strictly to recipes, whether the ones for cakes found in a cookbook, or the ones for living found in the Good Book.

A devout Southern Baptist, Della (J.J. Van Name, magnetic throughout) finds herself on the horns of a devilish dilemma when Jen (Jensen Power), the daughter of her late best friend, returns home from New York to announce her impending hometown nuptials and asks if Della will bake the wedding cake for her and her bride-to-be. Della's refusal sets the story in motion.

Inspired by the Supreme Court case of Masterpiece Cakeshop v. Colorado Civil Rights Commission, playwright Bekah Brunstetter, best known for her work on television's "This Is Us," aims to combine comedy and drama in a toothsome, bittersweet confection. But rather than effectively layering those flavors, both the script and director Tracy Ward's production tend to muddle them.

Macy (Asia Jackson), Jen's fiancé, is a fired-up writer for Jezebel and HuffPo. In her first scene, she lets Della know that she won't watch food TV "because it fetishizes an industry that's killing hundreds of thousands of individuals," and won't eat cake because of the gluten. "Ohhh," empathizes Della, "you're allergic?" "No," Macy replies, "it's just a parameter I set for myself." Those are terrific lines, and Jackson delivers them with ace comedic timing, but they make Macy an utterly laughable character when we're supposed to have empathy for her. For much of the play, one secretly hopes Jen will cancel the wedding.

Jen is as meek and non-confrontational as her partner is ferocious, and Power plays the role with a sweet, ever-conciliatory fragility. While staying at her relatives' during a wedding planning trip, she refuses to sleep in the same bedroom as Macy "so they won't have to think about it." She feels guilty for even asking Della to make their cake. For much of the play, one secretly hopes Macy will cancel the wedding.

Then there is the subplot about Della and her good-old-boy plumber husband Tim (Dixon Phillips). The fact that Jen and Macy are getting married sends Della into a funk about the sexlessness of her own partnership (because homosexuality is about sex?), and we end up treated to scenes in which her breasts are covered in buttercream and his genitals are smeared with instant mashed potatoes.

It's hard to know what to make of the surreal, awkwardly unfunny scenes in which Della fantasizes about her upcoming appearances as a contestant on "The Great American Baking Show." The booming, judgmental voiceover of a Paul Hollywood/God figure alternately chastises her for refusing to bake the wedding cake for Jen and Macy and makes lascivious comments that awaken Della's own dormant libido. There's no new information here, just a gimmick.