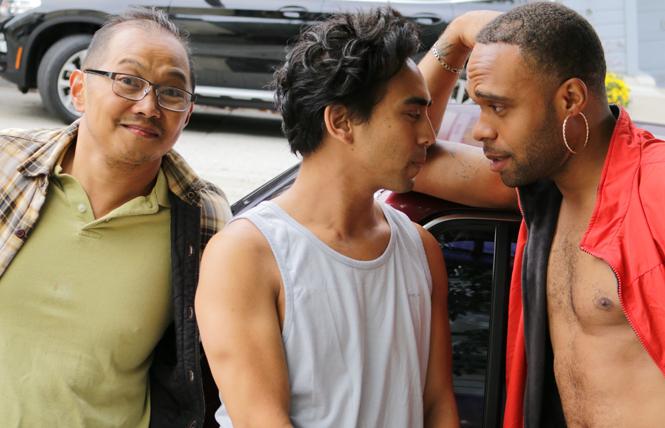 "There's a huge community out there looking to see narratives about themselves, to hear stories that represent them as something other than caricatures," says director Ely Orquiza, discussing "Driven," the play he's currently rehearsing for its October 31 debut.

Decades ago, it would be reasonable to assume the topic at hand was queer theater. But Theatre Rhinoceros, which is mounting the premiere of this warm comic drama by playwright Boni Alvarez, has showcased LGBTQ-themed productions for over four decades; the New Conservatory Theatre Company is dedicated to queer work; and other Bay Area companies now regularly incorporate gay and lesbian stories in their programming.

What Orquiza is observing is a dual dearth of productions about Filipino Americans and about the Asian American queer experience. His perspective is shared by the prolific Alvarez, most of whose dozen-plus scripts center on the Filipino diaspora and also feature gay characters.

"I feel like it's my responsibility as a Filipino playwright," says the gay East Palo Alto native currently based in Los Angeles, where he teaches at USC, his M.F.A. alma mater, and is a writing resident at the Geffen Playhouse. "It may limit my appeal a bit to theaters in some parts of the country. Nationally, Filipinos tend to congregate in cities like New York, LA, San Francisco and Chicago, and my plays tend to have large casts. I've had artistic directors tell me that they love the scripts, but that they're not feasible given local talent pools." But even in the Bay Area, last year's Magic Theater production of "Gangster of Love" and A.C.T.'s 2015 "Monstress" are rare examples of Filipino-focused work.

"Driven", with a cast of just three, is an exception, making it a potential break-out play for Alvarez and an ideal choice for Theatre Rhinoceros' first full production in the intimate 45-seat Spark Arts Gallery in the Castro, where the company has previously presented readings and pop-up events. It's a father-son story that stood out to director Orquiza when he first read it because it directly addresses some of the struggles faced by Asian American performers. The gay main character, Danny, who comes from a working-class Filipino family, has studied acting at Yale and Julliard, and moves to Hollywood with big dreams. He finds himself soul-sapped by the industry's stereotype-based casting decisions, and considers giving up his performing career. His father, Arnel, who struggles with addiction and lives vicariously through his son, urges Danny to press on.

"'Driven' really resonated with me because this Filipino father character is supportive of his son's passion for the arts, and accepts his queerness," says Orquiza. "It's a very particular story, and it shows that there are alternatives to the culture of silence about homosexuality that's often represented as the only attitude in Asian American households."

Aesthetically, Orquiza delights in the way Alvarez's writing captures the cadences of Filipino-accented English and the bits of Tagalog that pepper the characters' speech. "I think that a lot of literary managers at theater companies around the country don't necessarily have the cultural competence to appreciate Boni's scripts on paper. There's a musicality to the language that comes to life on stage."