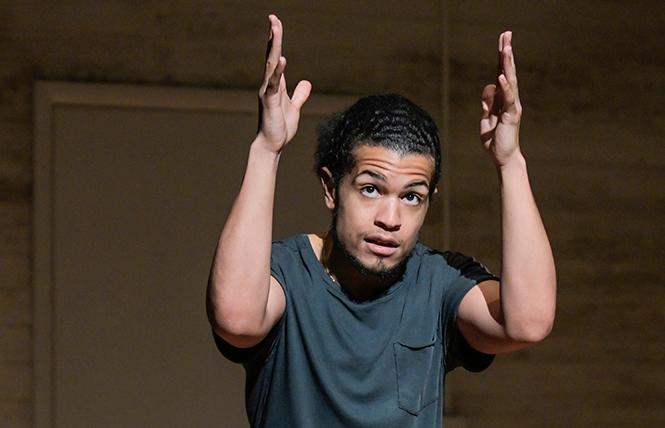 During quick breaks between scenes in the thrilling Berkeley Rep production of Suzan-Lori Parks' audacious new drama "White Noise," the play's titular sleep-inducing sound is accompanied by projections of its traditional visual counterpart: the field of agitated black-and-white pixels we oddly refer to as "static."

Agitation and stasis. Black and white. These tension-wracked dualities are at the fibrillating heart of "White Noise," a provocative look at culturally ingrained racism among the would-be Woke. The Bay Area has recently seen a near-numbing glut of plays that wrestle with race, but none of the others have crackled with the keen mix of intellect and emotion that's featured here. "White Noise" is neither a moral scold nor a rallying cry, it's an invitation to self-examination delivered with welcome complexity and unnerving wit.

The plot revolves around two 30ish couples, Leo and Dawn, and Ralph and Misha, best of friends since meeting in college. Back then, their romantic configuration was Leo and Misha (who are both black) and Ralph and Dawn (both white). Today, they're all consummate urban liberals, proud — and earnest — in considering themselves post-racial and post-possessive.

Director Jaki Bradley has her superb cast perform with the shiny, slightly amped affect of a sitcom. Their expressions and postures are a tad exaggerated, their quips near-perfectly pointed. Similarly, Adam Rigg's set, which comprises the two couples' bland-chic apartments and the upscale Lucky Strike-style bowling alley where they socialize, conveys the sense of an integrated "Friends." The show's surface is stable, a benign dream.

In short order, Leo (Chris Herbie Holland), a struggling, sleep-deprived painter with a tenuous hold on his mental health, is roughed up by New York cops for "walking while black," and independently wealthy Ralph (Nick Dillenburg), a struggling writer and college instructor, is passed over for a tenure-track position, which goes to a Southeast Asian colleague.

The pump is thus primed for these two old pals to make an outlandish deal: Shell-shocked after his literal beating — and lifelong slow-motion degradation — Leo asks Ralph to purchase him as a slave. In theory, this will allow Leo to buy into the protective halo of white privilege. Contemporary American society, his argument goes, is less likely to mess with the property of a white man than with a self-possessed black man. Ralph's professional failure has teed him up to accept this immodest proposal, not only because he's been bested by a person of color, but also because, in a commerce-driven culture, paying off Leo's student loans (the price of the deal) gives him back a sense of value, usefulness and — most chillingly — altruism. Disaster ensues.

Alongside this central storyline, related themes reverberate through two subplots. Dawn (Therese Barbato), a self-described "do-gooder" lawyer, defends a black teenager, secretly aware that he is guilty. Misha, played with spectacular, vitriolic humor by Aimé Donna Kelly, hosts a live call-in web series called "Ask a Black," for which she adapts a thick "ebonic" accent. She seems more invested in baiting racist trolls than providing any information of value. As Leo and Ralph assume the roles of master and slave, their partners also indulge in perverse race-based performances.

Over the course of the play, each member of the quartet delivers a monologue that probes their family history and helps explain the development of their perspectives on race and privilege. These soliloquys are beautifully written and deeply insightful about the ways in which prejudices insinuate themselves into even the best-intentioned minds, but their fine-grained, realistic detail feels a bit at odds with the rest of the show.

In "White Noise," Parks is primarily trafficking in truth, not realism. The bulk of the play is a hot poker of the Swiftian surreal. In his opening monologue, Leo ushers the audience into the drama. From the outset, he lets us know that he moves through the world in an insomniac's dangerous trance: part aware and awake, part lost in reverie, and never sure which is which. Much of what comes next may look literal enough, but it follows a nightmare illogic. Subconscious understandings of how the world works rise to the surface in metaphorical horror.