Not toeing the line: 'Dance Nation' 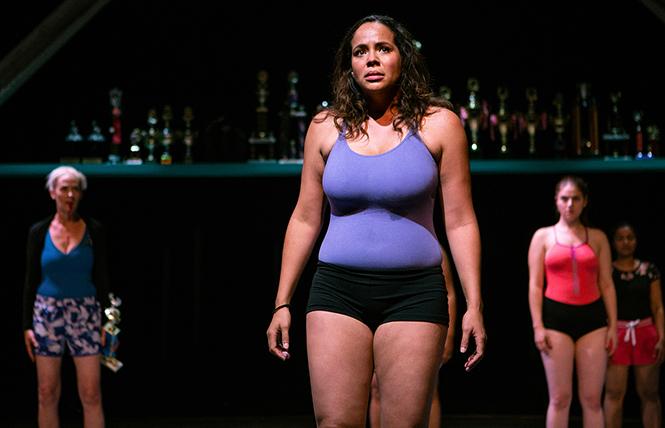 You don't expect a show called "Dance Nation" to be about a lack of coordination. But Clare Barron's bold, original play, at the San Francisco Playhouse through Nov. 9, is exactly that: a darkly funny, often uncomfortable take on the wildly discombobulated relationship between hormones, psyches and socialization in tween-age girls. While its main characters are members of a suburban Ohio amateur dance team, the play's most complex choreography takes place not on the stages where they perform, but within their unruly adolescent minds.

Through hesitant dialogues, self-conscious monologues and the rare outburst of unbridled Id, we see how camaraderie sloppily elides with competitiveness and how coming into one's own can feel awfully similar to isolation. Director Becca Wolff and choreographer Kimberly Richards imbue the entire production with an exquisite, on-the-brink awkwardness.

"I hope I get it," half-prays one of the tweens, about to audition for the role of Gandhi in the latest hackneyed interpretive routine by their overinvested coach (Liam Robertson). Barron is ironically quoting "A Chorus Line" — a show that really is about extraordinary dancers — in juxtaposition to her play about utterly ordinary girls.

While fancy dancers have long been a staple of theatrical entertainment, the minds of ordinary girls turn out to be a rich, fresh topic for exploration. Barron keeps us focused on those minds, and shuts down our inclination to objectify young female bodies (even during fleeting moments of onstage nudity), by insisting the teens be played by actresses of wide-ranging age and size. The audience is not given a chance to be hypnotized by shiny superficiality.

Stand-outs among the cast here are Lauren Spencer, compellingly conflicted and angry as Ashlee, the most mature and rightfully cynical of the girls, beginning to recognize the realities of the world outside their youthful bubble; Julia Brothers as Maeve, all oblivious innocence (and perhaps a touch of dimwittedness); and Mohana Rajagopal as Connie, a victim of unfair treatment childishly trying to soothe the pain with a magic toy pony.

Less well-written are the roles of Dance Teacher Pat (Robertson); Luke (Bryan Munar), the only boy in the class; and The Moms (several parts, all played by Michelle Talgarow). Because "Dance Nation" is far more focused on the relationships between the class members themselves rather than the inevitable outside forces of parental pressure and sexism, these parts are marginalized, leaving the actors little to work with. That said, Barron has smartly refused to let too-familiar narratives of sexual abuse or Billy Elliot masculinity-crises impinge upon the overlooked experiences she's illuminating here.

To many male audience members, "Dance Nation" may seem a foreign country. It's well worth a trip.