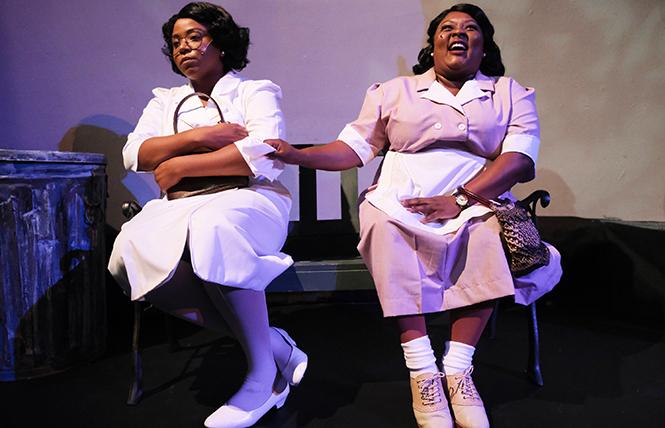 Jasmyne Brice as Caroline and Phaedra Tillery as Dotty in Ray of Light Theatre's "Caroline, or Change." Photo: Nick Otto

"Caroline, or Change" is more than the title of Tony Kushner and Jeanine Tesori's ingenious sung-through musical, now playing in a not-to-be-missed Ray of Light Theatre production. It's an aphorism we'd be well to heed as the 2020 election approaches.

Set in Lake Charles, Louisiana in 1963, and originally produced in 2003, the show is still troublingly relevant today. Its plot and themes ingeniously radiate from the charged relationship between Caroline Thibodeaux, an impoverished, black 39-year-old single mother of three who works as a maid (Jasmyne Brice, in a walled fortress of a performance), and Noah Gellman, the 12-year-old only child of the middle-class, white Jewish family that employs her, who has a careless habit of forgetting to remove the pocket money from his pants before dropping them in the hamper (Christopher Apy, maturely modulated in a particularly challenging juvenile role).

Just as Kushner ("Angels in America," "The Intelligent Homosexual's Guide to Capitalism and Socialism") deftly plays with the titular "change" as both noun (loose coins) and verb (to progress), he gives us "Caroline" not only as a vivid character, but also as the embodiment of the painful, systemically encouraged action taken by her and much of America during the Jim Crow era (to sink into soul-distorting resignation). In flashbacks, we meet the younger, stronger, more optimistic Ms. Thibodeaux, whose opportunities and spirit will gradually be crushed by the intermeshed gears of economic and racial injustice. "To Caroline" is to flatline.

Sounds bleak. But to my amazement and delight, "Caroline, or Change" — which, despite its appealing pedigree, I'd never seen before this production — manages to be not only an upright reckoning, but also an outright toe-tapper. Kushner's semi-autobiographical book and lyrics deliver his signature political and philosophical insights with a lighter touch than usual, while composer Tesori ("Fun Home," "Violet") concocts an engrossing amalgam of milieu-appropriate Motown, Gospel, and Klezmer motifs that bring fizzy carbonation to what could easily have been a stiff drink of a show. Ray of Light's production is gorgeously sung by the cast, and played with invigorating energy by David Moschler's 12-piece orchestra.

A twist of magic realism also adds further thought-provoking fun to the proceedings in the form of a phenomenally tight, Supremes-like vocal trio (Majesty Scott, Elizabeth Jones, Cadarious Mayberry) that personifies the radios that keep Caroline company at work and home; an anthropomorphized singing bus (Martin Bell, in the most striking of Bethany Deal's wonderful costumes); and the similarly vivified washing machine (Leslie Ivy) and dryer (Anthone Jackson), whose portrayal by black actors and close association with Caroline raise discomforting parallels between African Americans and appliances in the show's setting.

Broad social conflicts are ingeniously distilled into approachable domestic drama as Noah's stepmother, Rose (Katie Pimentel), decrees that Caroline should keep any coins she finds while doing the wash, trying to simultaneously teach the kid a lesson and avoid giving the maid a raise. Pimentel is terrific, teasing out delicate nuances in what is simultaneously the show's most thankless and most psychologically complex role. Imaginative, melancholy Noah turns his dirty clothes into surreptitious charity, purposely leaving loot in the laundry — treasure for Caroline to dig up, but also fuel for self-indulgent fantasies of being a hero to her family. Noah's own mother has recently died, and his father, despite a hasty remarriage to Rose, is adrift in grief.

One of director Jenn Bevard's strongest accomplishments is making the audience keenly aware of Noah's obliviousness to his privilege without curdling our affection for the boy. Similarly, in conjunction with Bryce's sorrowful implosion of a performance, Bevard allows us to understand that Caroline's stoic defeatism is not a character flaw, but a survival mechanism.

Scenes shift between the large Gellman home — two stories, plus the only basement in town — and the ragged shack where Caroline struggles to feed her own children: little boys Jackie and Joe (Royal Mickens, Antonio Banks) and firecracker teenage daughter Emmie (Markalia Dyson), a burgeoning civil rights activist. This trio ends Act I with the exuberant song-and-dance showstopper "Roosevelt Petrucius Coleslaw," a highlight of the evening, and closes the production in a coda of hopeful harmony. While they're not exactly two sides of the same coin, by show's end we understand that Emmie's headstrong evolution might never have happened without Caroline's tucked-tail perseverance.

It's a bit of a populist surprise to hear that Tony Kushner, like Whitney Houston before him, believes the children are our future. But it's the earnestness of that sentiment — and of the familiar music to which Tesori sets his words throughout the show — that allow "Caroline, or Change" to deliver a sophisticated critique of sociocultural division without ever feeling remote or didactic. Who knew the superficially shared liberalism of American blacks and Jews could be the stuff of an enormously entertaining musical? In addition to its hinging on the relationship between children and a domestic servant, "Caroline, or Change" shares "Mary Poppins"'s formidable skill of using a spoon full of sugar to make the medicine go down.

An ideal musical for the current moment — another production will be mounted on Broadway beginning in March, just nine pregnant months before the election, or, one fears, The Birth of a Nation — this politically potent show insists that each of us must make a choice: To Caroline or To Change.