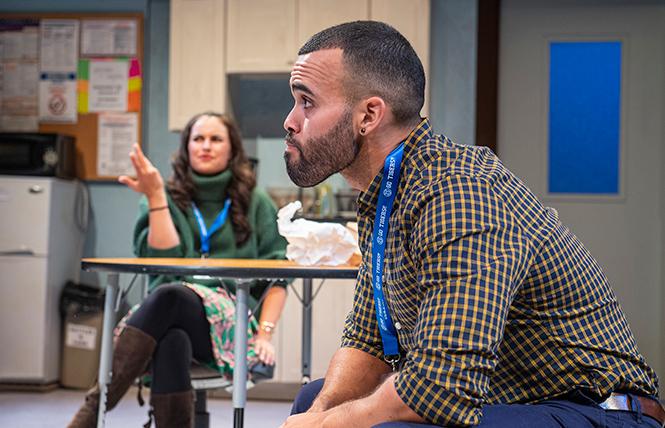 If you're a fan of the fast-talking, morally complicated characters Aaron Sorkin has written for "The Newsroom," "The West Wing" and "The Social Network," don't miss playwright Ike Holter's "Exit Strategy," a bristling ensemble drama now in its Bay Area premiere at the Aurora Theatre Company.

Holter, who was recently on the writing staff of Fox-TV's "Fosse/Verdon," transplants the sort of pithy, verbally dexterous workplace dialogue we've heard situated in pseudo-realistic Hollywood renderings of network news, the White House and Silicon Valley into the rougher-edged but no less soap-opera-prone setting of a failing Chicago high school. Bringing the clashes and conspiracies of a gender-, race-, sexuality- and age-diverse inner-city faculty to raucous life in this intermissionless hour-and-45-minute binge of smart talk and social anthropology, Holter declares himself a Riposter Boy for equal-opportunity articulacy. It's great to see hard-working characters with salaries under a hundred grand get to be bright and impassioned and witty.

A superb ensemble of some of the Bay Area's best actors brings these clashes, conspiracies, and a gender-, race-, sexuality- and age-diverse inner-city faculty to vivid life as they battle on behalf of their beleaguered school, with moments of genuine surprise along the way. The latter have been in short supply on Bay Area stages of late, as our local theater companies have leaned toward ruminative repertoire that addresses contemporary social issues more didactically than dramatically.

So settle in and enjoy the fireworks. The estimable Margo Hall sinks her teeth into the role of a flinty 20-year-plus veteran English teacher who sees the writing on the wall for an institution where 60% of the students fail to graduate. Michael J. Asbery plays another old-timer with an inside line to both the teacher's union and at the Department of Ed., which is trying to shut the school down. Gabriella Fanuele is sharp and funny as a millennial Latina teacher who is fundamentally sunny despite constant frustration, but may have developed an on-the-job drinking problem. Sterling stalwarts of the local theater scene Ed Gonzalez Moreno and Sam Jackson are also apple-worthy faculty members, and Tre'vonne Bell hits the right balance of youthful enthusiasm and unwarranted arrogance in his role as a student who is preternaturally gifted, both socially and intellectually.

But it's Adam Neimann, as Ricky, the school's boyish vice-principal, who cranks this already energizing production up several notches. As a closeted gay man and, apparently, the only white person at the school, Ricky has allowed himself to fade into the background, generally ignored by both students and fellow faculty. But the shock of a sudden death and the threat of impending closure light a fire beneath him, and Ricky becomes the vehement flagbearer for his underdog institution, assembling a coalition of students and teachers for an ill-fated protest. With his putty-like face, elastic voice and surprisingly limber doughboy physique, Neimann plays his milquetoast-goes-rogue role to the hilt and then some. Director Josh Costello, also the new artistic director at Aurora, should probably tighten the leash a bit. Still, while Neimann goes close to overboard, it's impossible to take your eyes off him.