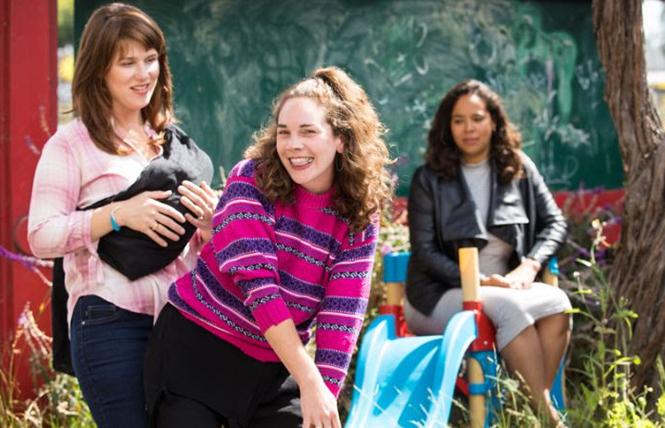 Provocative, poignant, funny and fleet, "Cry It Out" is a refreshing work of just-slightly-heightened social realism. Playwright Molly Smith Metzler's punchy take on class and motherhood, now playing in a Just Theater production, presents complex perspectives in a straightforward form. Over a well-paced 95 minutes, first-time new moms from varied economic backgrounds share confidences and conflicts about childcare, spouses and careers in a scruffy Long Island backyard.

Recent theater seasons have found Bay Area companies presenting an abundance of contemporary cultural critiques told through clever (sometimes excessively so) meta-theatrical narratives, among them "Fairview," "Straight White Men," "Kill Move Paradise," "King of the Yees," even the musical "Soft Power." In "Cry It Out," there's no showy structural convolution, just nuanced characters and conversation; no cerebral gamesmanship, but plenty of emotional heft and moral quandaries. I mean it entirely as a compliment when I tell you that the domestic drama of "Cry It Out" strikes a tone midway between "Roseanne" and Arthur Miller.

In the opening scenes, we meet new next-door neighbors Lina (Martha Brigham) and Jessie (Lauren English) as they bond over coffee and always-on baby monitors in Jessie's tiny yard. They have exhaustion, weekday loneliness and brief maternity leaves in common, but their differences are significant: Lina and son are living in her unemployed babydaddy's childhood home, along with him and his alcoholic mother. Jessie, a New York lawyer on the verge of partnership, and her husband have recently moved from their city apartment to save for a future home in a fancier suburb. Lina dreads returning to work as a hospital admissions clerk because finances dictate leaving her baby in the care of her soused monster-in-law. Jessie dreads telling her husband that she's contemplating taking a break from her career — and jettisoning his upward-mobility fantasies — to be a stay-at-home mom.

The two form a close friendship that allows them to look beyond their socioeconomic differences and genuinely empathize with each other's struggles. Brigham's Lina is a comic delight, a New York-accented tough cookie whose thick skin covers a deep well of panic. English brings an extraordinary translucence to her portrayal of Jessie: the desires to care for her baby, her husband and herself are almost always simultaneously visible, but they shift in intensity when a blush rises in her cheeks, tears well in her eyes, or a quaver in her voice belies a more confident posture.

Smith Metzler complicates matters with an awkward-but-efficient plot maneuver that suggests a child-rearing "Rear Window." There's a third new mom in the neighborhood (or slightly above it), whom we learn of only when her anxious husband, Mitchell — who's been observing Jessie and Lina's get-togethers via telescope — arrives to beseech the duo to let his spouse join in their daily coffee talk. He and his wife Adrienne (Lauren Spencer), a luxe jewelry designer, live in a posh hilltop development nearby, from which he's been observing Jessie and Lina via telescope. To hear Mitchell tell it, Adrienne has become a different person since giving birth, chilly and keeping a distance from their baby. To hear Adrienne tell it — which we eventually do, in a lacerating monologue — she has refused to become a different person just because she's given birth, mothering her child with the aid of a nanny and personal assistant, but also remaining fully committed to her work.

While economic status clearly informs each of the three mothers' options and decisions, Smith Metzler's insightful script and Molly Aronson-Gelb's sensitive direction make "Cry It Out," titled after an infant bedtime regimen, something richer than an articulation of maternal class divide. Each of the play's distinct, utterly believable women must also reckon with profound psychological divide, working to strike an internal balance between her sense of responsibility and her sense of identity.