Tonal tightrope in 'House of Joy' 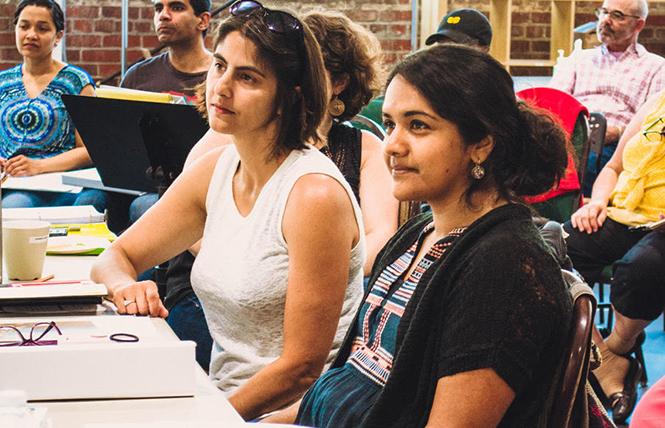 Audiences attending "House of Joy," opening at the California Shakespeare Theater this week, can expect swashbuckling action, eye-pleasing pageantry and old-time theatrical thrills. There's also a major creative cliffhanger in store: How will this world premiere production of a play originally conceived as escapist fare navigate topics that have turned out to be inescapably, disturbingly relevant at the current moment?

"The play started as a kind of campy adventure," playwright Madhuri Shekar told the B.A.R., recalling the piece's origins back in 2016. She'd been feeling a need to turn her artistic attention away from the dismaying wake of the recent Trump election. "But with each subsequent rewrite, I've gotten more honest."

In a colorful fantasy version of mid-17th-century India during the Mughal Empire, the show's central adventure finds Hamida, an elite royal bodyguard, defying the values she's upheld for her entire life and sparking a revolution after learning that Mariyam, the youngest of the Emperor's many wives, is trying to flee her abusive marriage and the kingdom.

While "House of Joy" hasn't altogether transformed from a Bolly-jolly frolic into a dark Harem-maid's Tale, two years of the current administration's misogyny capped by the recent Jeffrey Epstein horror show can't help but impact its tone and reception.

"The play has continued to change a lot within the past two weeks," Shekar noted late last month as the CalShakes rehearsal process was getting underway. "I've realized that even if the world we portray is fantastical, every moment also has to feel real." At this point, she hopes that audiences will react to the show as "both an escape and an engagement."

Part of how Shekar aims to keep "House of Joy" enjoyable is by keeping contemporary perspectives at bay from her characters. "I feel like yes, audiences are going to react to the fact that there's domestic violence, but the characters aren't looking at their situations through 21st-century glasses." There's no cultural concept of victimhood in the play, but there are female heroes, engaged in swordfights, escapes and other derring-do.

"The characters are constantly in action," Shekar explains, "but they never comment on what they're doing. My focus, more than anything else, is that this play be immensely entertaining. It should be fast-paced and gripping, like a great genre piece. That's what will let audiences engage without shutting down."

Director Megan Sandberg-Zakian agrees. "Striking the right tone is something we've been working on in rehearsal. The way we take on serious themes here is in the vein of the best superhero movies or comic books. Think of how 'Star Wars' wrestles with the biggest themes of good and evil in the world, but is always entertaining."

Another pop-cultural touchstone that Sandberg-Zakian acknowledges, not only for the social uplift of its story but also for its richly detailed visual style, is the "Black Panther" movie. "Our design team did so much research into the Mughal Empire and its colonies. They took elements grounded in history and transformed them into something original and fresh."

Both playwright and director are pleased that "House of Joy" will have its debut in the beautiful outdoor setting of CalShakes' Bruns Amphitheater in Orinda. "We're able to lean in to the large elements of the play in the choral portions, to use the audience and to interact with them," says Sandberg-Zakian. "It effects the play in a very positive way. The abusive Emperor never appears on stage, so his villainy becomes an idea, he represents a system as a whole."

Audiences, the creators hope, will be swept up in the solidarity that emerges to reject it.