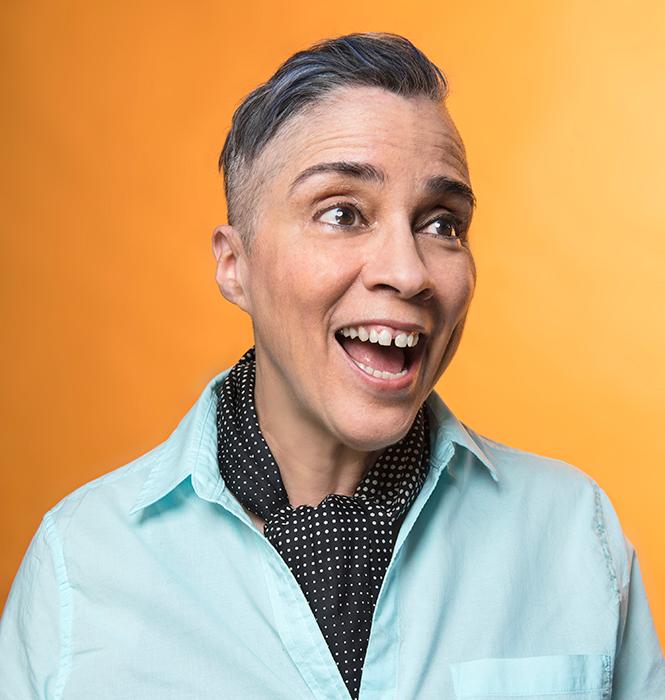 For comedian Marga Gomez, coming to queer comedy happened at an early age. So it only made sense to put together her own type of live comedy series. "Who's Your Mami?" comedy is coming to Brava Theater Center's Cabaret three times from August through September.

"I grew up as an only child of entertainers and artists," said Gomez. "When I left my parents' house, I moved to a white neighborhood, and my dreams of following in their footsteps of show business slowed down because I realized nobody looked like me, nobody was my skin color, and there were no masculine-presenting women and nobody with a gap between their teeth. So I kind of gave up on it, and I was going to be a teacher. Later on, I came to San Francisco only because my parents found out that I was gay in New York and I wanted to get the fuck away from them — hostile is the word for it.

"I started performing here in the early 80s at various clubs like the Valencia Rose, which was very historic for its presentation of LGBTQ comedians and cabaret theater — in San Francisco, there was an audience for it, fortunately.

"They were also activists as well. I tend to be a little bit of a firebrand up there on stage, and 'Who's Your Mami?' follows the path of what I saw when I came here to San Francisco, where I found alternative comedy. Even Robin Williams, who became famous here, always had a very clear observational, very creative way of doing comedy. Comedy coming out of the rest of the country wasn't that so much, and then in clubs in San Francisco like Valencia Rose and Josie's, there was the feeling that there was a wide umbrella to be queer, a very wide umbrella, and performing there was about challenging the status quo. So I took that to heart, and my comedy was like that. I didn't really do a lot of mainstream comedy shows, I forged my own venues at like-minded comedy centers around the country.

"'Who's Your Mami?' will have the same spirit of alternative comedy. The series will definitely be social justice issue-oriented, but it's also going to be funny. I'm the curator of it, and I looked for people who inspire me as who they are, and what they come out of — as people of color, as trans comedians, women comedians, and lesbian comedians.

"Every show has a very strong host, and I have booked hosts who are actually stars of the show and headliners as well. I feel the host is in every way as important as the headliner. I have here people that I know personally, who are heroes of mine, who crack me up.

"I think some people are scared to go to comedy shows these days. Nowadays comedy is so unoriginal and hateful and cheap. The name of this particular series, 'Who's Your Mami?' uses 'Mami' as a term of endearment for people who are in touch with their feminine side. This series is for people who are fed up to here with the 'bro' culture in San Francisco."

Performers in the show agree with Gomez's take about this series. As Jesus U Bettawork, performing in the series in August, said, "I love and appreciate that 'Who's Your Mami?' comedy showcases and celebrates diversity! The audience is in for a variety of comedic voices, identities, experiences, political views, etc. That is, all the delicious factors that make our nation so wonderful, whether those in authority see it or not."

Natasha Muse, a trans comedian who will perform in the "Who's Your Mami?" series in November, also has a positive view of the series. "Shows like this are a great way to relax, laugh, and replenish your soul and whatnot."