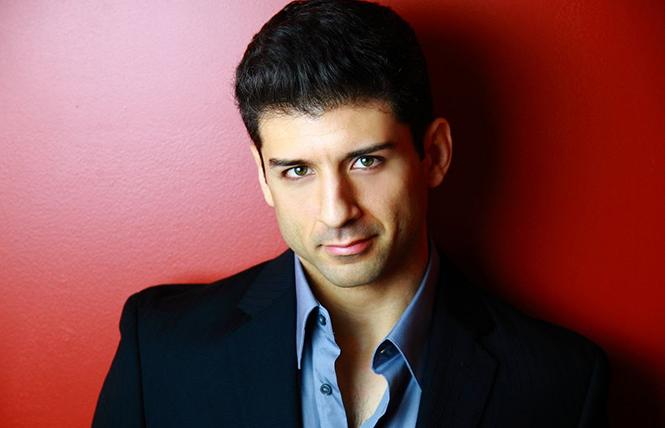 When Tony Yazbeck takes the stage at Feinstein's at the Nikko on Aug. 15 & 16, you'll get the expected singing and storytelling, but you'll also get tap-dancing, a craft infrequently plied on the small-to-non-existent stages of cabaret venues.

"A lot of my songs are accompanied by a two-piece band," says Yazbeck, a veteran of 10 Broadway shows, including the 2014 revival of "On the Town," for which he won the Astaire Award as the year's best hoofer. "My music director plays the piano, and I'm playing the drums with my feet.

"I've done my cabaret act all over, but I've never played this room before, and I'm big on the architecture of the venues I play, so as soon as I get to San Francisco, I'll take a look and start thinking about what I'm going to do," says Yazbeck. "Some of my steps are set, but a lot of what I do tap-wise is improvisation."

"I can't not improvise," explains Yazbeck, who made his Broadway debut at age 11, as a newsboy in the Tyne Daly production of "Gypsy." "The audience should feel like they're watching a real-time event, not something that's canned or rote, which isn't interesting to me, either."

Yazbeck almost audibly winces when he thinks back on his days in musical theater.

"Earlier in my career it was so strict, the choreography. Doing that isn't real art to me, it's a kind of commercial entertainment, which is fine, but it's not really interesting to me to do that exactly the same, eight times a week. It starts to feel terrible. And it can look dead. But you always have that angst and tension in a career as a performer. You want to be creative, but you also need to make the money. Pay the bills."

The lyrics to Billy Joel's "The Entertainer," a song Yazbeck recently performed at Lincoln Center, directly speak to this dilemma while ironically allowing Yazbeck to flex his more artistic side.

"People are so accustomed to seeing tap used to portray a simple sense of joy, but it can be deeper, more profound. It can express melancholy. I find tap to be a good tool for dealing with frustration. It can be very therapeutic. About seven years ago, I was very frustrated with the Broadway routine. I would go to tap studios and just bang on the floor to get out all my feelings."

At the time, says Yazbeck, "I was asking myself what I was doing. I started to hate going by the book. It gets stale after a while, no matter how well your career is going. I was either going to quit or I was going to create something, and nobody was going to stop me."

"Cabaret is completely your own, from scratch," he says. "I was getting so tired of the business, and I just wanted to create something that felt completely authentic to me. I invested a lot of money in the show and the album I recorded based on it ["The Floor Above Me"], but the return on it was incredible."

Around the same time, Yazbeck encountered a second reanimating force in his future wife, dancer/choreographer Katie Huff, who proved a much-needed source of encouragement. And a third: the role of Gabey in the dance-dominated "On the Town," in which his solo numbers allowed him the breathing room to dance differently and more expressively every night. Since then, he's had the opportunity to work on two shows, "Prince of Broadway" and "The Beast in the Jungle" choreographed by Susan Stroman, who Yazbeck says has the confidence to "set parameters, and then let you do your thing."

Yazbeck has realized that his thing is storytelling. "Acting, singing, dancing — it all comes from the same place. The instrument is the body, but we're all storytellers, that's what you have to do well to succeed. I've been regarded as an acclaimed dancer, but I'm not remotely as technical as others. I can't kick my head like some of them can do, I don't do four or five turns. But being able to make the dance tell a story is more important than those skills. If I just started tap-dancing without a story to share, you might be impressed at first, but after a couple minutes you'd get bored; you'd want to know what's next."

Yazbeck, whose parents enrolled him in dance class after watching their four-year-old son mimic a Fred Astaire film on television, is now beginning to explore on-screen possibilities for himself.

"There's a real hunger for musical storytelling on TV and in movies right now," he says. "But they're not doing original work yet. And big movie-star names don't have the skill set to do it in a way that you don't have to edit a big dance into a hundred shots. There's a reason people were attracted to watching Fred and Ginger from head to toe.

"I'm working with writers to develop and tell stories in new ways for today. There's nothing in my career that feels more important right now than bringing more theater people on board. It could be the beginning of a new MGM era."