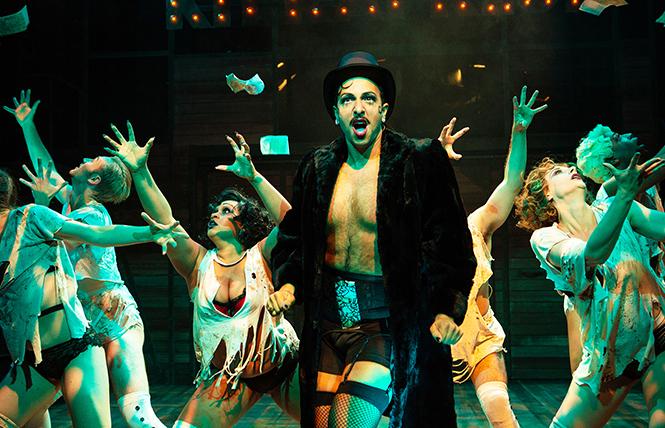 "Cabaret" is one of those shows that just won't go away. Nor should it. It's a classic, Tony-winning Broadway musical, it has a great score, and it's relevant to our day and age. In fact, it's frightening how relevant it still is in our time. To close out its season, San Francisco Playhouse is presenting a new production of "Cabaret" (book by Joe Masteroff, based on the play by John Van Druten and stories by Christopher Isherwood; music by John Kander; lyrics by Fred Ebb) directed by Susi Damilano, music direction by Dave Dobrusky, choreography by Nicole Helfer, through Sept. 14. Out There attended the Press Opening last week.

Under Susi Damilano's sharp direction, even the subplot courting scenes between Fraulein Schneider (Jennie Brick) and Herr Schultz (Louis Parnell) stand out. Often pushed to the background in the show's decadent whirlwind, in this production the secondary characters are fully present and accounted for in these actors' strong, committed performances.

The cabaret scenes are what we most remember from this musical, of course. The sexual freedom, the cross-gender role-playing and the apocalyptic decadence are all given full vent and portrayal in songs like "Don't Tell Mama" and "Money." Choreographer Nicole Helfer's sexy, salacious dance moves effectively upstage Bob Fosse's famous poses and postures. In fact, all the miming of oral sex and mimicry of shtupping might be a little overdetermined; trust us, we get it, with the very first Kit Kat kick and caboodle.

But underlying all the trysts in the sexual playground is the dark and foreboding coming of the Third Reich, as otherwise anodyne characters show their true Nazi colors and begin goose-stepping like mild-mannered salarymen turning rhinoceri in Ionesco. The cute geriatric love story falls victim to Kristallnacht. In fact, add an onstage beating and an offstage abortion, and "Cabaret" turns out to put us in a very dark world. The week of our Orange Imbecile exulting in military hardware in our nation's capitol, and humanitarian nightmares continuing on our southern borders, the show felt very much in (goose) step with our present American moment. That's not a night at the cabaret, old friend, it's a day of reckoning.

As usual with Playhouse, production values are high, and a simple but clever set design by scenic designer Jacquelyn Scott functions well as the Kit Kat Klub (with a few audience members seated stageside), Fraulein Schneider's boarding house and a few backstage or fruit-store scenes. Its utilitarian design becomes another chilling reminder of the Holocaust in a directorial gambit revealed only at the play's very end.

A Stritch in time: an interview with Billy Stritch