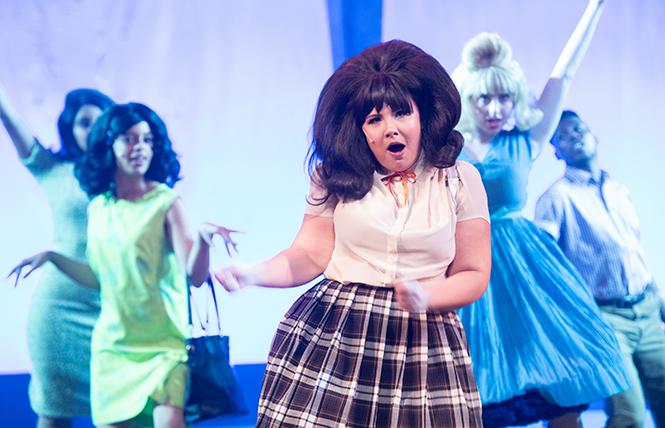 I'd already been grinning for a good 10 minutes when the cast of Bay Area Musicals' joyful production of "Hairspray" launched into the civic swoon of their opening anthem, "Good Morning Baltimore." From the moment I arrived at the Mission District's Victoria Theater, I'd been thinking "Hellooo, San Francisco!"

A crowd that ranged from tweens to seniors in a wide spectrum of skin tones and wardrobe choices gathered under the marquee and filed into the auditorium, chatting in accents and lingos as varied as their looks. For the first time I can recall, a San Francisco theater audience seemed to genuinely reflect our local citizenry. So did the cast and crew, their harmony of surnames including Cabrillo, Kanaski and Patibanda, El-Tayeb, Gutierrez and Wong. Between its open-minded approach to casting, modest ticket-pricing, commitment to community outreach, and, with this production, a canny choice of name-brand material that's also smart and topical, Bay Area Musicals had set the stage for success before the first note was sung.

They followed through with flying colors. The vibrant pinks, yellows, reds and greens of Brooke Jennings' outstanding exaggerated 60s mod costumes immediately established a gumball-bright mood for the evening that was matched by high-spirited and well-calibrated performances across the board. Perhaps the most challenging aspect of "Hairspray" for actors is establishing and maintaining a delicate balance between the humane and the cartoon. "Hairspray" is much more "Grease" than "West Side Story," but its subject matter demands the kind of deft handling provided here under the direction of Matthew McCoy.

The show's script, adapted by Mark O'Donnell and Thomas Meehan from John Waters' 1988 screenplay, is built around a drive to end racial segregation among the teenage dancers on an "American Bandstand"-like local television program in 1962. A parallel storyline focuses on plus-sized dancer Tracy Turnblad (Cassie Grilley) and her truck-sized mother Edna (Scott DiLorenzo) as they struggle with issues of social and self-acceptance. The script astutely suggests that racism and fat-shaming have a common denominator, in the judgment of character based on physical appearance.

On opening night, it took Grilley a few scenes to fully snap into character. But by the time Tracy falls into a romantic reverie after accidentally being touched by high school heartthrob Link Larkin (Kamren Mahaney) and sings the swelling "I Can Hear the Bells," she'd found just the right mix of baby-faced romance and blue-collar moxie the character calls for, and zipped through the rest of the show like a shiny pinball. John Waters' twisted wholesomeness is delightfully evoked when Grilley, in a metallic dress and stripey Bride of Frankenstein bouffant, and Mahaney, with a toothy grin of psycho-killer intensity, officially couple up in the finale to sing "You Can't Stop the Beat." The bubbly score by Marc Shaiman, music and lyrics, and Scott Wittman, lyrics, evokes period girl groups and R&B without ever sounding too derivative of existing hit songs.

As Tracy's best friend Penny Pingleton, Melissa Momboisse is a lanky comic delight. All pointy elbows, orange pigtails and boundless enthusiasm, she's like a neurotic Pippi Longstocking. As her black beau Seaweed, Dave Abrams brought the house to its feet for a standing ovation with the strongest singing and dancing in the entire cast. Abrams' booty-rotating, high-jumping turn in "Run and Tell That" is electrifying. Paul Plain manages to find a real depth of emotion in what can be the one-dimensional role of Tracy's father. And as Seaweed's mom, the DJ Motormouth Maybelle, Elizabeth Jones hits gospel heights in the rousing (if slightly out of left field) 11 o'clock number "I Know Where I've Been."

Curiously, the character for which "Hairspray" is most famous, Edna Turnblad (Scott DiLorenzo), is the weakest link here. Tradition has the part played by a man — Divine, Harvey Fierstein and John Travolta among them. Back in 1988 or even 2007, when the movie remake came out, this may have seemed funny or transgressive in its own right. But the part has never been played for gender-bending laughs, and DiLorenzo isn't great at playing nurturing or matriarchal. At this time, in this city, a bolder casting move might have been to cast a woman as the mother. Here's wishing San Franciscans even more of the engaged community theater they deserve.