'Passion' is a compelling creep show 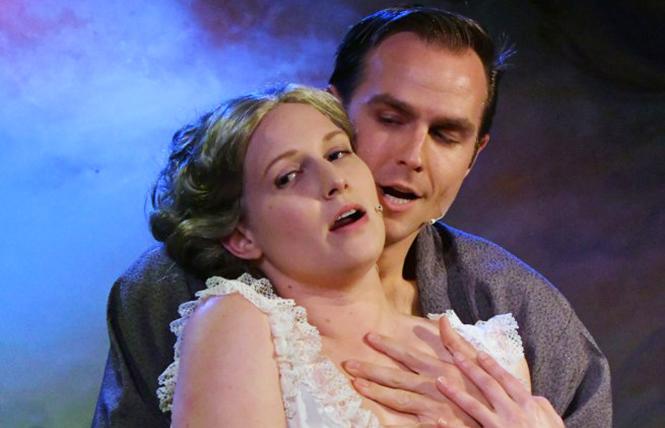 Love and misery intertwine to the point of strangulation in the delectably creepy "Passion" (music and lyrics by Stephen Sondheim, book by James Lapine), now playing in the appropriately claustrophobic confines of the Custom Made Theatre.

By misery, I mean not only the emotional distress that emerges in a twisted romance between Giorgio (John Melis), an urbane Milanese army captain dispatched to a remote mountain outpost, and Fosca (Heather Orth), a mentally unstable "collection of many ills" who is the orphaned cousin of Giorgio's commanding officer, Colonel Ricci (Domonic Tracy). I also refer to the movie adaptation of Stephen King's novel.

You see, Fosca is Giorgio's Number One fan. And like Annie Wilkes, the character played by Kathy Bates in "Misery," she's relentlessly bent on winning over the man she fancies. Yes, there are plenty of differences in the pieces' plotting and themes. But the horrifying, can't-look-away power of the lead female performances are what stick with you long after you hobble away from your theater seat.

Heather Orth's take on Fosca is a cringe-inducing mixture of frailty and ferality. With hair pinned back to accentuate her pale-powdered oval face, deep-set eyes and a vertical slash of a nose, Orth resembles a barn owl. Seemingly shivery and recessive as she eavesdrops on the men's encampment beneath her sickroom window, she's actually primed for predatory action. She'll repeatedly sink her talons into Giorgio, physically and psychologically.

After the soldier politely rejects her affections, explaining that he has a mistress in the city, Fosca asks — begs — him to love her as a sister. But when Giorgio indulges her wishes and kindly takes a seat at her bedside, she clutches his face with both hands and greedily plunges in for an aggressive hybrid of tongue-kiss and head-butt. So effectively played by both actors, the moment had me literally recoiling in my seat, palpably sensing Fosca's violation of boundaries and compulsive rejection of propriety.

Following through on her amorous obsession with episodes of self-harm and stalking, Fosca's drive is so relentless it leaves Id marks on her quarry. Apparently, Giorgio is ultimately so flattered — worn down? — by Fosca that he succumbs to her pursuit. His motivations are not entirely clear, partly due to Melis' greater strength as a tenor than as an actor, but primarily because the script and lyrics insist that there's an irrepressible, illogical wildness within us all, while only strongly demonstrating it in one character among a cast of 12.

Oh, yes. It's not that I forgot to mention the show's 10 other yeoman performances, it's just that — with the exception of Clara (Juliana Lustenader), Giorgio's orderly, married mistress who's into scheduling appointments for sex, but utterly lacks the show's titular quality — their characters feel like inessential embroidery on a two-person chamber opera. This effect is heightened by director Stuart Boussel's awkward maneuvering of the troops on and off the theater's tiny stage.

It's easy to understand that the military, with its dull routines and "uniforms, uniforms, uniforms," is emblematic of buttoned-up societal mores. But sometimes less is more, and it might have been more effective for Boussel and musical director Brian Allan Hobbs to pare down their acting corps as they did with the instrumental accompaniment: a potent, emotive three-piece onstage combo highlighted by cellist Ami Nashimoto, luxuriant in her sound but admirably stoic in her constant upstage center presence.
Lyrically, "Passion," which was adapted from the 1981 Italian film "Passione d'Amore," is among Sondheim's least cerebral efforts, without much of the witty wordplay he's admired for. But that's in keeping with the primacy of unalloyed emotion at the show's center. Likewise, the lack of discrete compositions (there are no song titles) suggests a continuous, if vacillating state of being. Musically, it's a stunner, alternately plangent and urgent, with themes surfacing and receding throughout the evening — insistent notions refusing to be repressed.