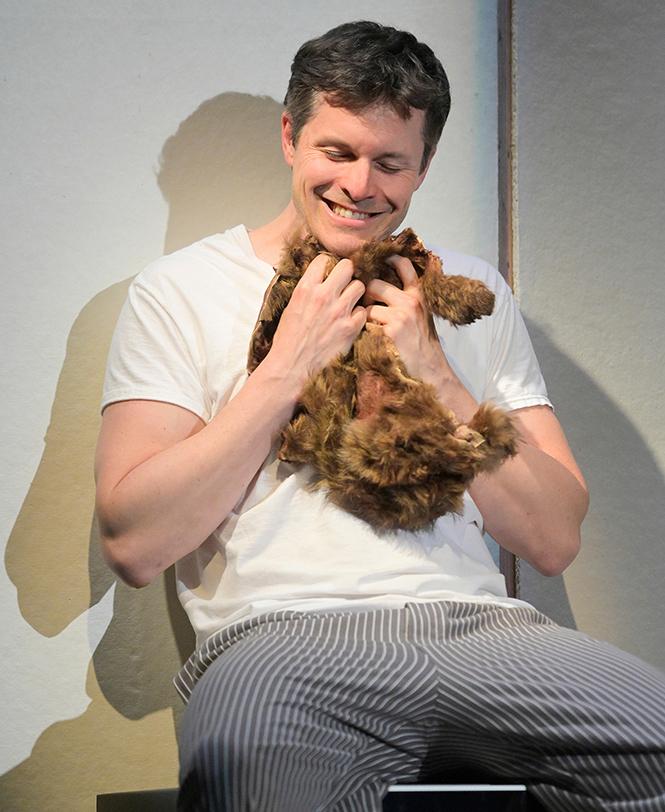 The fog comes in on little cat feet in "Wink," playwright Jen Silverman's absurd dark comedy now making a promising world premiere at the Marin Theater Company. The eponymous character is a domestic feline; the play's meanings are elusive.

I have mixed feelings about fog. There's seductiveness to its shapeshifting and eerie chill, but I always anticipate the warmth and illumination that come with its clearing. In tracking the disintegration of a stereotypical suburban marriage, "Wink" shifts fantastically between laugh-aloud humor and existential horror, putting its hapless characters through a gauntlet of humiliations. But while it's often fun to observe Silverman noodling with Big Ideas — the permeability of boundaries, the repression of desire, the artifice of conventionality — she doesn't quite advance through her musing to a clear point of view.

That said, the juxtaposition of director Mike Donahue's rambunctious, highly physical production with the script's philosophical underpinnings makes for a wild 75-minute ride. Every time you start to scratch your head, frustrated at the undecodable scenario, you get jolted into laughter as a living room is bombarded with kitty litter, walls are violently demolished, and characters take to the rooftops or slip into fur underpants.

The play begins with middle-class couple Gregor (Seann Gallagher) and Sofie (Liz Sklar) reacting quite differently to the several-day absence of Wink, whom Gregor, nonplussed, pointedly refers to as "your cat." Sofie, on the other hand, is in a grief-wracked frenzy. Their living room, a cautious morass of putty grey and oatmeal beige, contains a miniature cityscape of cat-climbing toys and hideaway huts, now as empty as their marriage appears to be. Dane Laffrey's scenic design is beautifully integrated with the storytelling.

During individual sessions with their jovial and superficial therapist Dr. Frans (Kevin R. Free), Gregor admits to skinning the cat alive in a fit of jealousy and marital frustration; and the doctor advises Sofie to consider the cat dead and manage her grief through housework. "Slam it down! Slam it down! Slam it down!" is his advice to each of them on dealing with difficult emotions. Free is a comic gem, perfectly conveying Frans' unempathetic expediency with brisk gestures and cheerfully condescending vocal nuances. ("Frans" and "Gregor" are Silverman's clever nods to Kafka, which, along with some fleeting Albee references, are more honorific Easter eggs than keys to unlocking this script.)

Soon enough, skinless Wink (John William Watkins) confronts Frans, announcing his planned revenge against Gregor, dispensing his own breed of pop-psych advice, and purring his way into the doctor's boudoir. As the action zips by with never a dull moment, the three human characters continue to unravel while Wink solipsistically grooms himself, strikes poses and offers the animalistic mission statement and general counsel, "If it doesn't make me feel good, I wouldn't do it."

Watkins, nearly naked in flayed-flesh body makeup and a posing strap, delivers a sublime performance as Wink. Elegantly conveying catness with a pivot of the ankle here, a roll of the neck there, he feels appropriately alien and self-possessed in this world of airlocked human needs, canned until they explode.

Silverman is extravagantly creative in her portrayal of that explosion. Unhappy marriages, suburban malaise and repressed savage passions have long been catnip for playwrights, but Silverman's absurd, kinetic approach to them offers a welcome freshness. Yet throughout the play, there's a nagging, exciting sense that Silverman is aiming not just for novel style, but novel substance. There's something about the cat being not a wild animal, but a domestic one. There are nuances in the choice to have Sofie fantasize about a terrorist. There's an impetus to the near-parodic portrayal of psychotherapy. Audiences needn't be spoonfed, but a bit more articulation would help. While "Wink" shows great potential in this world premiere, it seems like some of Silverman's peak thinking is still emerging from the fog of process.