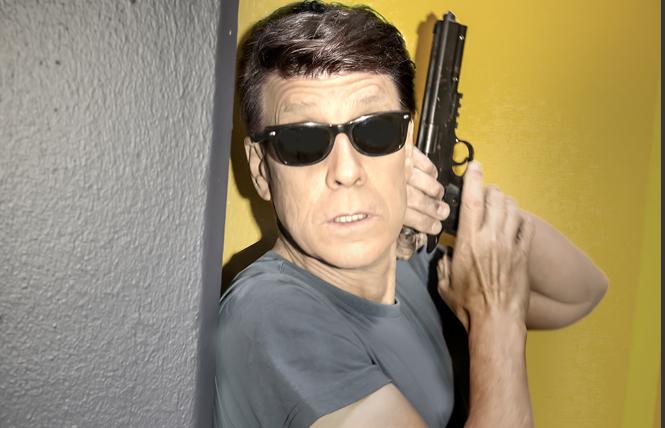 Does the world need two stage plays that revolve around the notion of Tom Cruise being gay? Probably not. But we've got em. John Fisher's "Action Hero," now being mounted by Theatre Rhinoceros in a rough-around-the-edges world premiere, is a far more intellectually engaging example of the genre-by-coincidence than "The Little Dog Laughed," a slicker Douglas Carter Beane comedy that played at the New Conservatory Theatre here a decade ago.

Fisher's "Action Hero" (in addition to writing the script, he directed, and is one-third of the cast) is a multi-layered Los Angeles fantasia, weaving film noir motifs with a tale of contemporary young men trying to break into the movie business and a slightly pedantic dose of LA's byzantine municipal history. The dialogue namechecks "Chinatown," and that film's influence is clear, as is that of the "The Game," the gimmick-dependent 1997 Sean Penn/Michael Douglas vehicle.

Among Fisher's most interesting angles here is that the pseudo-Cruise character, called Clark Tail, is not written or played as being altogether duplicitous in denying that he's gay. Instead, his elusive identity is portrayed as part and parcel of an entire Hollywood ecosystem in which illusion and reality are fluid. Clark Tail, played by Fisher, is just the clearest example of a condition in which all of these characters exist.

Jason, the protagonist-narrator (Gabriel Ross), is riddled with moral slippage. He thinks of himself as self-directed but relies on his wealthy father for handouts, feels embarrassed scraping together a living doing gay bar sitcom parodies as he auditions for "real" acting jobs in the movies, revels in playing deceptive pranks, and is sexually and professionally seduced by the man he sneeringly describes as "Hollywood's biggest closet case."

His more laid-back buddy and apparent sometime fuckbuddy, Cranston (Jake Soss) operates in a go-with-the-flow modality wiggling between authenticity and careerism with no sense of moral conflict. As written by Fisher, he's the happier soul.

The cast of three works admirably hard throughout a fast-paced 90 minutes. On a virtually empty stage, they pantomime fight scenes, scramble up risers meant to suggest a rocky incline, and slide on their backs across the stage to suggest floating through the L.A. sewer system. There's an earthquake, a flood and a fire in the course of the show, which is as ridiculous as, well, a Hollywood action movie. Or life in Los Angeles.

This is a difficult-to-pin-down play, much of which I suspect is intentional, since ambiguity is among its subjects. The deep darkness of the Phoenix Theater's thrust stage and the occasional underbeds of noir soundtrack music occasionally make "Action Hero" feel genuinely eerie. At other times, especially when the actors are in drag, making quick changes (Fisher and Soss play multiple characters) or rushing through physically demanding blocking, there's an almost slapstick, antic quality to the proceedings. These disparate tones would actually benefit from more ambiguity, overlapping in the middle rather than doing battle as polar opposites.

In his second Rhino role this year (after playing the young lover in "Deathtrap"), Jake Soss is again almost distractingly sexy. With his handsome smile, physical ease and a penchant for shirts that seem designed to creep above his waistline, one can easily imagine him in the Tom Cruise role. And if he's in a Rhinoceros play, he must be gay. Right?