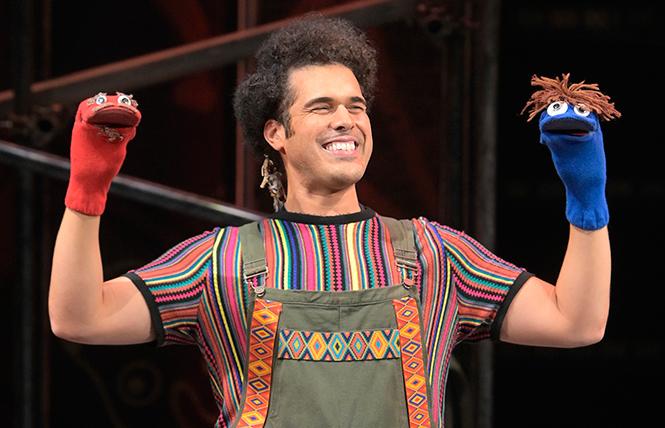 Aztec society worshipped the sun. "Kiss My Aztec" frenetically proves the adage that there's nothing new under it.

The wisecracking world premiere production now at the Berkeley Rep throws kitschy, derivative shadows of many other recent musical comedies: There's the historically relocated hip-hop of "Hamilton"; the "thee"-til-it's-twee Elizabethan excess of "Head Over Heels"; the coarse sexual shtick of "The Book of Mormon"; and the quippy puppetry of "Avenue Q." Co-writer/lyricist John Leguizamo has called "Spamalot" an inspiration, and the stage-and-screen influence of Mel Brooks babbles incessantly here.

It's particularly odd, then, that "Aztec" ends up emulating so little of the heart and spirit of Leguizamo's own last show, "Latin History for Morons" (also directed by Tony Taccone for a Berkeley Rep world premiere), a one-man performance in which he sketched brief, informative portraits of under-acknowledged cultural heroes while emotionally recalling efforts to infuse his own children with a sense of Latinx pride. If you're expecting an expansion of that show's mission here, be forewarned. You won't get any more insight about Latin American history from "Kiss My Aztec" than you do about the American West from "Blazing Saddles."

The opening musical number "White People on Boats" and a finale built on the lyric "The world is getting browner" are more gestures to establish "Aztec"'s identity-politics cred than distillations of the rest of the show's content.

Leguizamo and Taccone, who collaborated on the book as well as directing, have built their slender plot around a fictional 1540 Aztec attack on the invading Spaniards' citadel. But fleeting gags about Aztec codices, customs, and tough-to-pronounce deities are primarily used to signal era and setting, while the majority of the show is scaffolding for modern risqué repartee. The high schoolers who adore "Hamilton"'s refreshing spin on history class will love "Aztec" too, but for its sophomoric groaners about pubic hair, vaginas, cocaine, buttsex and other matters of extracurricular importance.

In all honesty, I laughed my buttsexing ass off at occasional zingers such as, "Are you alright? You look like you've been roofied by Lord Cosby." But I grimaced at lines like, "You got a nice pair of milk containers on you." A whole song on the glories of "Dark Meat" felt particularly unenlightened.

The material is far outclassed by a fantastic, high-energy cast of 11. Joél Pérez gives a master class in clowning as Pepe (yes, there is a peepee joke), a virginal Aztec scion deeply attached to his sock puppets, Macchu and Picchu. As the warrior Colombina, Yani Marin brings such charismatic energy to her performance the show's anachronistic girl-power messages are able to transcend their cookie-cut triteness. And Richard Henry Ruiz, a sort of 16th-century Jabba the Hutt, is irresistibly crass in his irresistible bejeweled codpiece (Clint Ramos designed the hit-or-miss costumes; there's one goth that seems grabbed from another show's wardrobe).

The music, composed by Benjamin Velez and played by a terrific six-piece onstage combo, is a mixtape of traditional and contemporary Latin idioms. It adds velocity and coherence to skit-like scenes that might otherwise feel like elements of a burlesque revue. The numbers blend together in a hooky, rhythmic soundscape that keeps toes tapping, but there are no standout melodies to hum on the way home. The score, like the entire show, seems primarily a delivery mechanism for Leguizamo's jokes. He's been more successful — both at entertainment and emotional impact — when he's worked as a one-man band.