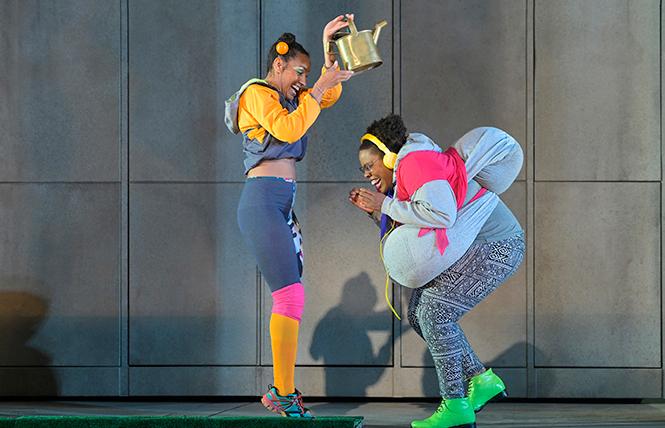 Puck yeah! Relishing his role as Fairyland's mischief chief and occasional cur, Robin Goodfellow, aka Puck (Robyn Kerr) — already the doubling is dizzying! — delights in his assignment to confuse and befuddle.

"Up and down! Up and down!" he sings to himself. "Goblin, lead them up and down." Kerr's lanky, Caribbean-accented Puck serves as our emcee in California Shakespeare Theater's romp of "A Midsummer Night's Dream." He leads the cast of characters up and down the ladder of social hierarchy, ensorcelling royals to fall in love with commoners, a fairy to swoon for a mortal, and plebes to swap partners as if a certain distinctly unfrigid 1970s ice storm were sweeping through the Athenian woods.

Up and down and side to side, the audience is invited to swing along with references that range from highbrow to low, and from ancient to modern. One happily anticipates Shakespeare's threading of gorgeous Elizabethan poetry with coarse wordplay and earthy sex jokes in his fantasy of Ancient Greece. But director Tyne Rafaeli and dramaturg Philippa Kelly stir things further with passages set to hip-hop rhythms and fourth-wall busting outbursts of contemporary slang. The Gordian plot that allows for these multi-layered hijinks is helpfully summarized in the program and readily findable online.

The bumbling theater troupe that mounts "Midsummer"'s show within a show has always been composed of laborers and craftsman, hoping to entertain their social superiors. In this poppy, souped-up iteration, the traditional minions evoke our latter-day version, kitted out in bright yellow get-ups that winkingly reference the "Despicable Me" movies. Throughout the show, Asta Bennie Hostetter's candy-colored costumes, Nina Ball's "Laugh-In"/Jack-in-the-box set and Jiyoun Chang's lighting design enrich the fast-paced verbal comedy, underscoring scripted jokes and adding new visual gags.

Puck and his fellow fairies sport lumpen Day-Glo soft-sculptural outfits that recall the pediatric-psychedelic designs of 1970s TV impresarios Sid and Marty Krofft ("H.R. Puff'n'Stuff," "The Bugaloos"). When ensemble member Amber Chardae Robinson plays a theoretically inanimate role in the amateur theatrical, her costume screams SpongeBob. Thy gossamer Shakespeare wardrobe this is not.

The entire cast of 10, all playing multiple roles, seamlessly shifts from character to character and nimbly handles their dialogue. Their crisp articulation, along with T. Carlis Roberts' gratitude-worthy sound design, make the play's language surprisingly easy to hear and follow given its kitchen sinkful of storylines.

In addition to Kerr's Puck, who makes you feel like a co-conspirator as much as an audience member, Jenny Nelson and Dean Linnard turn in particularly sly comic performances: Nelson's Hermia, the show's central female love interest, strikes a funny balance between romance and entitlement, and Linnard perfectly calibrates gawkiness and sex appeal in his main roles as young lover Lysander (sexy up; gawk muted) and play-actor Flute (full gawk; light, drag-enhanced sexiness).

Then there's Marcel Spears, whose gut-busting performance comes as close to a star-turn as possible within this tight-knit ensemble production. As cocky Bottom, the weaver and would-be thespian, Spears struts and preens to delicious comic affect, refusing to consider himself any less desirable even when his head is magically transformed into that of a donkey. He helps turn the last few scenes of the show into a delirious party that you want to continue even after the cast takes its bows. That's the kind of raucous engagement one might have felt when this play was performed in Shakespeare's time, and it's a pre-summer night's dream to experience at the Bruns Amphitheater in Orinda.

Some chalk-dusty high school English teachers might disapprove of this production's nonstop cartoon verve, but if your interest in the Bard is as much about living theater as written literature, you'll find CalShakes' "Midsummer Night's Dream" an accessible and irrepressible delight.