The demon butcher of Wall Street 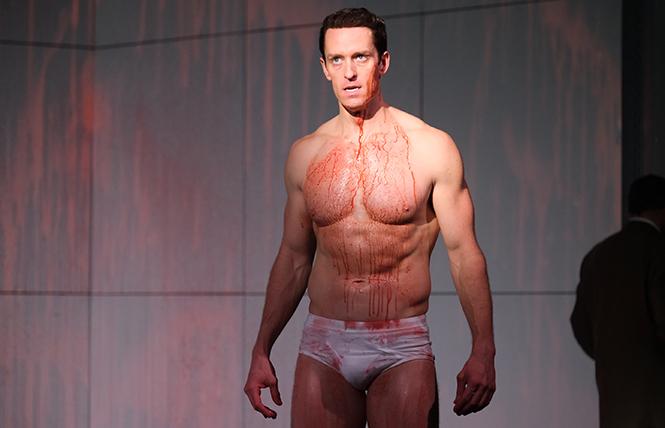 There's an all-too-familiar glimmer of today's San Francisco in "American Psycho," the musical adaptation of Bret Easton Ellis' black comic 1991 novel about a white-collar murderer, now making its West Coast debut in a sleek, chilly Ray of Light Theatre production. On the evening of his 27th birthday, Patrick Bateman (Kipp Glass), the show's titular investment banker, encounters a homeless man begging on a New York City sidewalk. Rather than expressing empathy, sharing a bit of his own good fortune or even just ignoring the man, Patrick addresses him in condescending tones, asking why someone who works hard for his money should give it away to someone who doesn't work at all. Then he kills him.

If you've walked along Market Street recently, you're familiar with a less extreme, but still extremely disturbing version of this vibe. You've felt the blithe disdain that emanates from certain members of our city's young business elite when faced with the personal inconvenience that is other people's homelessness. "How dare such ugliness," they seem to ask, "disrupt my pleasant life?"

"American Psycho"'s sociocultural themes, which are actually more focused on the micro-strata of upper-class status than the gap between haves and have-nots, have proven to have a longer shelf-life than one might have hoped, thus protecting the musical's milieu from feeling outdated. The book and musical's multiple references to Donald Trump suggest an eerie prescience, not a period piece. But the original novel's voice and structure, too loyally adapted by Roberto Aguirre-Sacassa (book) and Duncan Sheik (music and lyrics), are not a natural fit for musical theater.

Ellis' novel is a stream-of-consciousness piped directly from Patrick's brain in a flat, monotonous tone. It conveys the emotional deadness of a character hypnotically entranced by modern capitalism, with its endless refrain of prestigious brand names, toxic misogyny, reverence of financial accumulation and arch dismissal of human connection. One can easily imagine the book inspiring an installation or a brief piece of performance art. "American Psycho" is not so much a story as a state of mind. It doesn't move and sing like a musical. It hums in place like a steel Frigidaire.

While the writers' choice to adapt "American Psycho" as a musical (and frankly, Ray of Light's choice to produce it) seem ill-advised, director Jason Hoover and his creative team have taken a stunning run at the challenge. Scenic designer Angrette McCloskey, lighting designer Weili Shi and video designer Erik Scanlon have collaborated on a stark, white-walled set that, while providing utilitarian flexibility, also suggests the vast spiritual emptiness of Patrick Bateman's mind, and perhaps the padded cells of a mental institution. Projected colors, images and animations transform the set throughout the show, though there's intentional ambiguity about whether what we're seeing at any time reflects a physical environment or a psychological one.

Choreographer Leslie Waggoner has developed a slightly robotic physical vocabulary for ensemble dance numbers that calls to mind era-appropriate music videos, particularly Janet Jackson's clips. It's a fine complement to the clipped, staccato dialogue that characterizes most of the show's ensemble scenes (cocktail parties, gym workouts, conference-room meetings). But a little "Rhythm Nation" goes a long way, and scenes begin to feel repetitious. The cast moves; the narrative is static.

While the choreography, Katie Dowse's costumes, and a terrific pencil-drawn animated tribute to A-ha creatively evoke the 1980s, Sheik's score only comes to life when he literally borrows that era's hits, interpolating brief segments of Phil Collins, Tears for Fears, Huey Lewis and Human League tunes. The brief presence of these earworms emphasizes the overall flatness of the show's electronic soundscape.

The entire Ray of Light cast nails the show's deadpan tones and purposefully clichéd dialogue, functioning as an organic whole as much as etching individual, three-dimensional characters. In addition to Glass, who shoulders the self-absorbed burden of Bateman without ever tipping into parody, Kirstin Louie, as a snippy off-and-on love interest, and Kyle Ewalt, playing a preening business rival (and murder victim) of Patrick's, stand out from the deadening crowd. Zoey Lytle, as a naïve ingénue inexplicably enamored of Patrick, brings a rich, limpid singing voice to her solo ballad "A Girl Before."

Ultimately, though, talented cast and memorable staging aside, there's no getting away from this show's source material. Whether you love it or loathe it, "American Psycho," like the digital crimson projected on the white walls of this production's set, is fundamentally bloodless. The original book was an attempt at social satire, using soulless serial killing not for suspense or drama, but as an intellectual trope. Among the aspects of our society that "American Psycho" decried was the power of popular brand names. Ironically, over time, it's become one. They've even made a musical of it! If you buy a ticket and boast you saw it, you can consider yourself Patrick Bateman's latest victim.