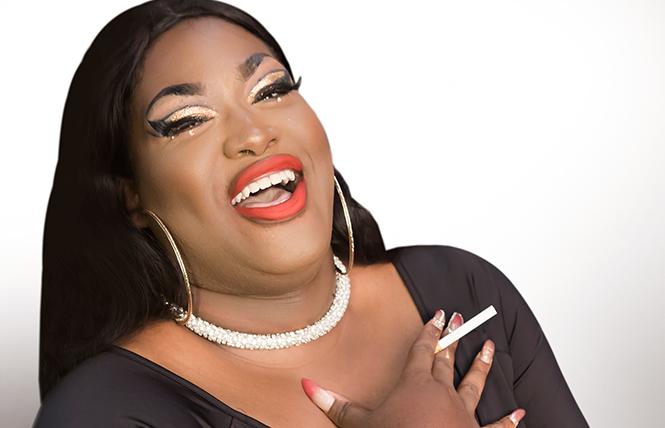 Branden Noel Thomas as Deloris Van Cartier in the Theatre Rhinoceros production of "Sister Act: The Musical," directed and choreographed by AeJay Mitchell at the Gateway Theater. Photo: David Wilson

Make like a wise man and follow the beckoning star. You'll end up not in Bethlehem, but at the Gateway Theater, where Branden Noel Thomas is beaming brilliantly as Deloris Van Cartier, singing nun, in Theatre Rhinoceros' rib-tickling, enthusiasm-fueled production of "Sister Act: The Musical." Move fast, though, because this is one lamentably short-lived supernova. Due to scheduling snafus, the theater was available for only a brief engagement, which ends on Saturday, June 1.

With his huge physical presence and a vocal range to match, Thomas takes complete command of a role that requires enough charisma to raise "Sister Act" above its stolid, surprise-free script. He's Whoopi, cushioned. In addition to occasionally evoking the sly side-eye of the original movie Deloris, Thomas summons fond, gospel-toned memories of the late Mabel King in "The Wiz" and Jennifer Holliday in "Dreamgirls."

The silly story follows minor-league R&B diva Van Cartier as the police shunt her into a nunnery after she witnesses a gangland murder. The baddies encroach. Deloris teaches the musically sheepish sisters to make a joyful noise. And a cop called Sweaty Eddie is sweet on the undercover nun.

As Eddie, Jarrett Holley brings a silky seductiveness to the Luther Vandrossian "I Could Be That Guy," the highlight of composer Alan Menken and lyricist Glen Slater's hokey but amusing pastiche score. There's a dancing-nuns number called "Sunday Morning Fever." Abigail Campbell, playing clean-scrubbed novitiate Sister Mary Robert, is also a standout, bringing amazing grace to a cornball epiphany ballad, "The Life I Never Led." Still, even when Branden Thomas has lesser tunes to work with, no one can hold a votive candle to his performance. He brings a spicy fervor to even the most communion-wafer-flavorless songs.

Whether undulating sensuously beneath costume designer David Draper's glittery cocktail frocks or adding his own roof-raising vocal bedazzling to the basic black habits Deloris wears in the convent, Thomas radiates sexy self-confidence. Smartly directed and choreographed by AeJay Mitchell, Thomas never plays Deloris as a drag queen or a joke. He makes her feel like a natural woman. Meanwhile, Curtis, the mob kingpin in pursuit of Deloris, is played by Crystal Liu, who sings in a sonorous, perfectly sustained tenor.

Where the Rhino's last musical production, "Priscilla, Queen of the Desert" (also choreographed by Mitchell) was a campy fiesta of overt genderbending. "Sister Act" offers an all-out gender shrug. It asks us to take its characters for who they are, regardless of the actors' anatomy.

If Liu and Thomas play at one end of the shrug-spectrum, the other is occupied by the unabashedly masculine Paul Loper as Sister Mary Theresa, and Kim K. Larsen, deliciously irritable as the Mother Superior. There's a little tittering in the auditorium when the characters are first introduced, but as this pair gets swept into the choral storm stirred up by the other nuns, their visible maleness is ignored both on stage and off as the audience quickly accepts them in the roles they've chosen to play.

There's a bit of unevenness in the singing and dancing skills of the ensemble, but it's more than compensated for by a collective, infectious, live-wire energy. JC Quimpo moves like electric current personified in his "Lady in the Long Black Dress" routine. The entire cast is clearly having a ball, and the feeling of fun radiates throughout the theater.

Corny but chuckle-inducing, "Sister Act" is a dad joke of a musical. With Catholicism's Holy Father as its lightly spanked butt, this particular dad joke feels especially appropriate in Theatre Rhinoceros' non-traditionally-cast production. Preaching a far more enlightened perspective on gender than the Church does, the Rhino's twinkle-eyed "Sister Act" not only provides a star-powered evening's entertainment, it serves up cheerful, benevolent revenge. Catch it this week, or pray for a second coming.