Too little smoke, too much mirror 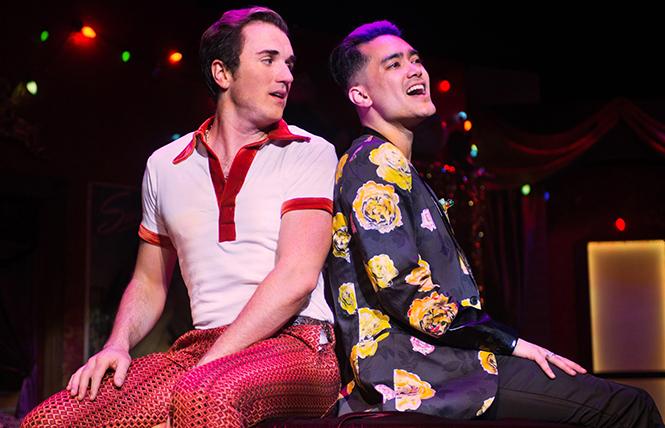 "I wish we had a bar like this," one of my companions exclaimed upon seeing Devin Kasper's irresistibly inviting set for "The View UpStairs," the earnest, overstuffed musical ushering in Pride Month at the New Conservatory Theatre Center. With its tattered red velvet curtains, framed Burt Reynolds "Cosmo" centerfold, shawl-draped baby grand and shelves of kitschy bric-a-brac, it feels like an ideal hybrid of Martuni's, Ginger's Trois and Twin Peaks Tavern. A rich evocation of The UpStairs Lounge, an actual New Orleans nightspot in the early 1970s, the visual appeal of the set and Wes Crain's period-perfect costumes pull you in like a warm hug from a gay grandpa with lots of stories to share.

While writer/composer Max Vernon's script and lyrics don't entirely manage to move these familiar characters away from stock stereotypes, director Ed Decker's fine casting and the actors' impressively lived-in performances go a long way to help. Schmitto's performance of "What I Did Today" is especially engaging, its two verses offering two versions of the same events, revealing boredom, aspiration and an eagerness-to-impress. His second big number "Waltz (Endless Night)" offers Vernon's most impressive narrative compression, packing a life's story into taut, image-rich lyrics. Rollins-Mullins owns not just his role but also the entire audience every time he moves across the stage, declaiming pithy bons mots and singing deep gospel tones.

A more nuanced portrait gallery of the UpStairs Lounge crowd and gay culture in the 1970s could make for a fascinating musical, especially given the venue's real-life fate. On June 24, 1973, the bar was destroyed in an arson attack that killed 32. Until the 2016 shooting at Pulse in Orlando, it was the deadliest-ever attack on a gay space in U.S. (The story is covered in-depth in an excellent new nonfiction book, "Tinderbox" by Robert W. Fieseler.)

But rather than deeply delving into the richness of this time and place, Vernon opts to place the historically important UpStairs Lounge story within an overarching, domineering frame narrative about an insufferable millennial "influencer" and wannabe fashion designer, Wes (Nick Rodrigues), who, while planning to buy the building that once housed the lounge, magically travels through time to meet his queer forefathers, and Learn Meaningful Lessons from Them.

Gay people had it rough in the old days.

In making the protagonist of "The View UpStairs" a contemporary character, Vernon, however unintentionally, gives short shrift to the show's historical setting and milieu — not to mention the victims of the fire, reducing them to tools to assist Wes' super-simplified character transformation.

It's as if the millennial playwright didn't trust his own peers to find the story of the Upstairs Lounge and pre-AIDS gay America as interesting as he did, so decided to provide a "relatable" tour guide. The result of this intra-generational condescension is Wes, who's about as appealing as Clippy, the Microsoft Paperclip. Get out of the way, dude. We're not stupid, and there's already plenty going on here.