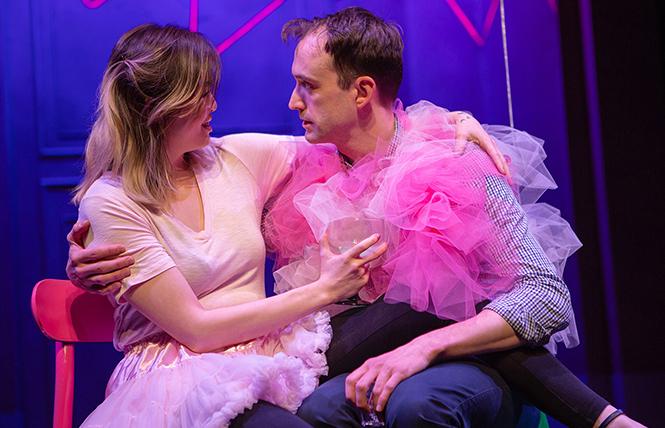 Best friends Laura (Ruibo Qian) and Jordan (Kyle Cameron) share a moment and joke about getting married in "Significant Other." Photo: Jessica Palopoli

The title of "Significant Other," playwright Joshua Harmon's curdled romantic comedy now in its local premiere at the San Francisco Playhouse, refers not to one of the play's many soon-to-be-spouses but to Jordan Berman (Kyle Cameron), a self-absorbed and un-self-helpful gay 29-year-old who whines and withers as, one by one, his trio of longtime gal pals find boyfriends and get married. Harmon asks us to empathize with Jordan as an outsider, an odd man out, an Other. But Jordan lives in a significantly different reality from most of us.

Ostensibly set in the present (and in New York, not a high school) "Significant Other" wants audiences to embrace an out gay man who apparently has no gay male friends, no lesbian friends, no straight male friends, and has never had any friend with a spouse or serious partner. Jordan also seems oblivious to the existence of Tinder, Grindr and similar mating aids.

Once ditzy Kiki (Hayley Lovgren), cynical Vanessa (Nicole-Azalee Danielle) and kindhearted Laura (Ruibo Qian, who outdoes the script with a stand-out, three-dimensional performance) are betrothed, Jordan will be bereft. Long before the climactic, inexcusably operatic hissy fit in which Jordan snips at Laura: "Your wedding is my funeral!" I'd come to think of the show as "Three Weddings and a Pity Party."

When Jordan stands at the edge of the floor watching each of his amigas take her first dance as a married woman, Cameron's wide, wet eyes and shifting facial expressions perfectly convey a wistful mixture of admiration and aspiration recognizable to anyone who has ever been single at a wedding, regardless of sexual orientation. But the universality of these moments doesn't spring forth from the character's specificities, it overrides them. We feel these emotions as our own more than Jordan's, because he's as unlikeable as he is unbelievable.

In one early scene, Jordan tells his girlfriends that he's obsessed with a new co-worker at his ad agency, Will (August Browning, who plays multiple roles). In response to their inquiries about his object of affection, Jordan can only objectify. He languorously describes Will's physique in minute detail (he has obsessively scrutinized him at a pool party, but has never had a conversation with him). Later, still not having spoken with Will, Jordan explains that he's been fantasizing about him while masturbating, and is pretty sure that he's falling in love. If this guy got married, he'd be a child bride.

Interspersed with Jordan's bumbled attempts at pairing up (Greg Ayers plays two of his dates quite charmingly), and his attendance at an endless series of girlfriends' showers, bachelorette parties and weddings, are visits and phone calls with his grandmother, Helene (Joy Carlin). Their melancholy, indirect conversations about loneliness have a credible texture largely missing elsewhere in "Significant Other," but the elderly widow's emotional aches make the young man's moping feel all the more trivial.

While there are a handful of laugh-out-loud zingers and touching turns of phrase in "Significant Other," there are also Valley Girl gags and mawkish moments. Harmon is capable of far stronger writing, in both dialogue and dramatic structure. His "Skintight" is a devilishly clever take on family dynamics, gay relationships and intergenerational friction (Idina Menzel will play in a Los Angeles production this fall), and his "Bad Jews" and "Admissions" have been widely praised. Director Lauren English and her entire cast all do decent work here, but the material they're working with is flimsy. Insignificant, even.