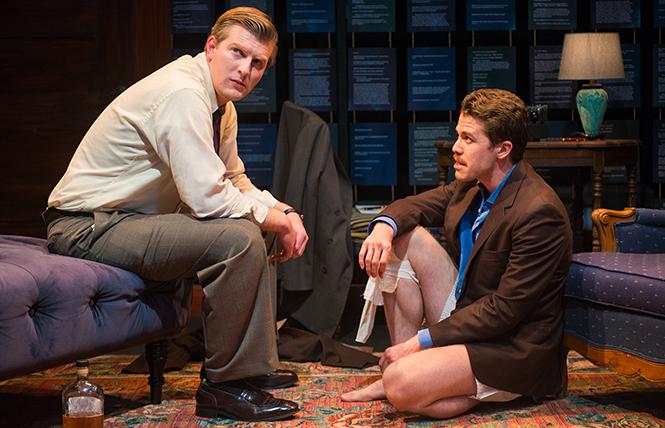 "Never work with animals or children," drawls Brennan Pickman-Thoon before one of the exquisitely timed pauses that help make his turn as a Tennessee Williams in "The Gentleman Caller" so compelling. He goes on, "Or Bette Davis." Then a shorter pause. "Who is both."

It's not an important line. And this is not an important play. But, as directed by Arturo Catricala and performed on a tightrope of camp and pathos by Pickman-Thoon and Adam Niemann (as William Inge) at the New Conservatory Theatre Center, it's extravagantly entertaining. That Bette Davis joke stuck with me because the whole play struck me as catnip for Ryan Murphy fans. If you've enjoyed the simultaneously winking and myth-gilding m.o. of the mega-producer's "Feud," the gutter butterflies of his "Pose" or the retro-bitchery of his Broadway "Boys in the Band" revival, you'll find "The Gentleman Caller" a toothsome morsel.

As it happens, the action of playwright Philip Dawkins' booze-soaked bonbon of a two-hander is set more than 15 years before Williams ever worked with Davis. She starred in the 1961 Broadway premiere of his "Night of the Iguana," quitting shortly into the run and replaced by Shelley Winters. But Dawkins has framed his story as a memory play, echoing Williams' structure for "The Glass Menagerie." During an opening monologue and several short intervals, all set in unspecified far future, Williams addresses the audience directly before stepping back into the drama of his past.

The meat of "The Gentleman Caller" is a speculative 1944 affair between Williams, 33 (just about to be launched into fame with the premiere of "Menagerie") and Inge, 30, then a St. Louis newspaper arts critic and later a successful playwright himself ("Picnic," "Come Back Little Sheba," "Splendor in the Grass"). In Act I, Williams, who grew up in St. Louis, arrives at Inge's gloomy basement apartment there, ostensibly for an interview about his budding career. But Inge, whose homosexuality is as repressed as Williams' is effervescent, secretly longs to connect — physically, emotionally and artistically — with a kindred spirit. Act II takes place a few months later, in a Chicago hotel room where Inge visits Williams a few days after the opening night of "Menagerie."

With wide, wet eyes and a frantic desire for approval, the bulky, broad-shouldered Niemann plays Inge like a puppy trapped in a depressed Midwesterner. It's a tough role given the flamboyant company he keeps, but Niemann makes doughy self-loathing as compelling to watch as Pickman-Thoon's swashbuckling faggotry.

Dawkins has clearly done an enormous amount of research into both of his characters' real-life counterparts, and "The Gentleman Caller" is gently threaded with information about the two writers' family backgrounds and their very different attitudes about sexuality and artmaking. But the play, while certainly talky, never gets bogged down in biography. A scant but sufficient plot has Williams compensating for his relentless cockteasing by becoming a sort of tough-love life coach for Inge. He ultimately encourages the younger man's playwriting, urging him to transform his inner pain into artistic expression.

During Act II, there's a scene in which the men gaze across the street through their window, observing a lesbian couple having sex in their own hotel room, an isolated box of light in the darkness. Williams and Inge are both turned on watching these forbidden transgressions, growing hornier and handsier by the moment. There's a similar thrill to be had in "The Gentlemen Caller." Watching these two pink panthers circle each other in the cage of 1940s sexual repression is a perversely hypnotic experience.