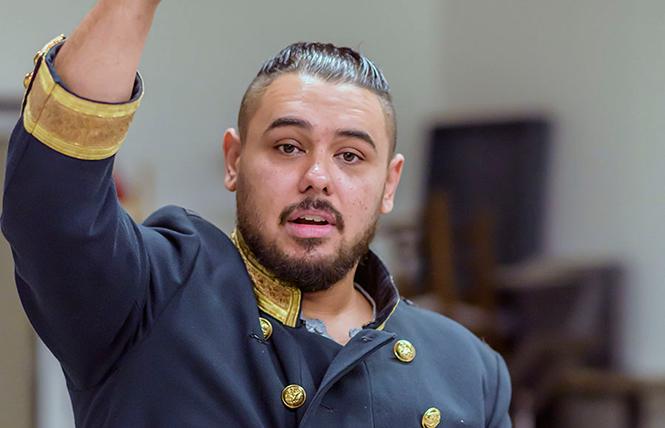 "Kill The Debbie Downers! Kill Them! Kill Them! Kill Them Off!" is the attention-grabbing but overlong title of the attention-worthy but overstretched performance now being staged by Berkeley's Shotgun Players. Billed as a devised theater piece, "KTDD" was created collaboratively by its directors (Mark Jackson and Beth Wilmurt), cast and creative team members, not from a formal script, but from characters and themes elicited from Chekhov's "Three Sisters."

While familiarity with the Chekhov is not a necessity, if you want to engage with this show on an intellectual level, it's almost a prerequisite to read the collateral material Jackson and Wilmurt have provided in the program and on Shotgun's website. You'll learn that they aim to embroider upon notions of stasis and desire, of "memories fading, revolutions looming, and visions of the future beckoning," of gobble and degook.

To be frank, I recommend intellectual disengagement. On stage, "KTDD"'s relationship to narrative and philosophy is similar to that of a Cirque du Soleil production. The piece yields plenty of pleasure if taken on a sensory level rather than a sensible one. Mikiko Uesugi's translucent-paneled set, Ray Oppenheimer's shifting veils of color-saturated light, Alice Ruiz' and Devon Labelle's stylized period costumes and props, and Sara Witsch's collage-like sound design are inviting from the moment you enter the theater, and enveloping once the action gets underway. That's action, not plot. Roll with it.

The physically and musically gifted cast of six seems at least as dedicated to entertaining us as to providing a comprehensible exegesis of "Three Sisters." There's a terrific variety show to take in here, with funny hand-jive routines, group songs with jolly accordion and trombone solos, Fossesque chairback choreography, even a little "Jaws" shtick. The sisters, our hostesses for this miscellany of a party, offer a triple tickle. As Olga, Sam Jackson, in a topiary marvel of a hairdo, offers a mini-master class in facial and vocal expressiveness; Erin Mei-Ling Stuart is a fetchingly melodramatic Masha, striking exaggerated poses of romantic resignation and martyr-like sublimation; and Gabby Batista makes an impish Irina, eliciting grins with her sweet singing voice, out-of-the-blue hip-hop moves and "Drag Race"-worthy deathdrop (complete with winking, wincing faux pain). And in a Bay Area theater scene that lately seems addicted to meta-cleverness, Nathaniel Andalis, playing Solyony, delivers a genuinely funny and unexpected fourth-wall knockdown that, in an ideal world, would be the last word on this theme for a while.

At two intermissionless hours, "KTDD" goes on a good 25% longer than it needs to, especially since its final stretch includes video footage of the Brett Kavanagh hearings and Las Vegas mass shooting. It's a sudden, unanticipated shift from delightful to dire, and reinforces some of the very preconceptions about experimental theater that the rest of this show has successfully broken down.