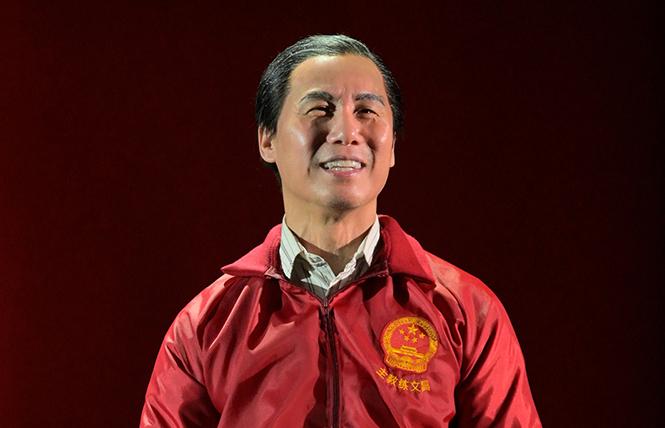 Lauren Yee, shooting for twooo! The native San Franciscan playwright has had a winning streak on home turf this winter, with major productions of both her loose, kooky "King of the Yees," which recently ended a run at the San Francisco Playhouse, and her basketball-themed drama "The Great Leap," which opened last week in an ACT production at the Geary Theater.

While neither play is an unequivocal slam dunk, both are enormously entertaining showcases for Yee's thrilling agility and willingness to make unexpected moves. Where "King of the Yees" was full of affable, ragtag Globetrotter clowning, the truly globetrotting "Great Leap" arrives with a tighter game plan.

The story, which bounces between 1971 and 1989, coalesces around a pair of Beijing encounters between Wen Chang (Wong), a Chinese intellectual "reeducated" in a labor camp as part of Mao Zedong's Great Leap Forward; and Saul Slezak (Arye Gross), Bronx-born coach of the University of San Francisco hoops team. In their first meeting Chang, who has studied English, is assigned to shadow Saul, who speaks trash-talk and urban Yiddish, as the American runs a cultural exchange training camp for Chinese ballplayers.

To Chang's initial discomfort, Saul encourages aggressive moves on the court, including bold physicality and psychological intimidation. Saul also encourages social aggression, helping set Chang up to become the coach of the Beijing University team and pushing him to flirt with the star of a Chinese women's squad. As slightly overplayed by the very funny Gross, Saul seems almost too ugly an American to influence Chang. But, while apprehensive, the quietly ambitious Beijinger has an unexpected openness toward Western ways.

Under the eye of the party apparatus, Chang needs to keep his feelings and opinions close to the vest. But Wong makes the most of the play's least showy role, pivoting on occasion to directly address the audience and slyly tease out subtexts. "It was the best of times, it was the worst of times," notes Chang, cheekily quoting Dickens — a favorite of his from university — to describe the dilemmas faced by a rising young member of the Communist regime assigned to crib strategies from an American he's officially supposed to loathe.

Playwright Yee reveals her own affection for the Dickensian in a story that grows ever twistier through a series of coincidences revealed to have taken place between Saul's early mentorship of Chang and the none-too-friendly Beijing U. vs. U.S.F. "friendship match" that provides the show's second-act climax. At the center (well, point guard) of these unlikely developments is "The Great Leap"'s third major character, the fatherless orphan Manford Lum. (Ruibo Qian brings a spirited tenderness to her role as Lum's neighbor Connie, but the script gives her little to do.)

Played with headlong adolescent energy by a sputtering, utterly believable Tim Liu, Lum, a Galileo High School senior and Chinatown streetballer of some renown, puts a full-court press on Coach Saul to let him join the U.S.F. team and travel to China for the big game. Liu's characterization is so credibly cocky that you may be inclined to give Yee a pass on letting the kid wear down the coach. But it's tough to entirely overlook the extent to which she gins up the plot.

While her Beijing-SF tale of two cities provides plenty of fodder for cultural and generational conflict, Yee too giddily leads "The Great Leap" into "Great Expectations" territory in Act II, gunning her way through revelations of a long-hidden photograph, a secret paternity, and the confluence of meager little lives with the sweep of history.

Yee's playbook here is so carefully mapped, so perfectly programmed, that "The Great Leap" ends up leaning a bit more toward an NBA2K video game than a flesh-and-blood pulse-pounder. Still, after a second half jam-packed with flashy maneuvers and near-unbelievable turnarounds, audience members will feel happily exhausted.