Custom Made on a roll 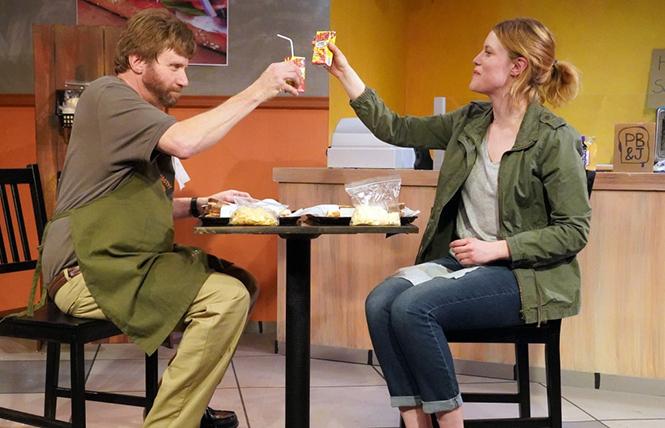 Subway is American-grown durian. Pass by any one of the Connecticut-based sandwich chain's 42,000 international outlets and you'll inhale an indescribable odor. Some find it mouthwatering, others find it bile-raising.

I'm die-hard Team Retch here, and I can only assume playwright Bess Wohl is, too, given the deliciously malicious spin she gives the fast-foodery in her comedy "American Hero," now in director Allie Moss' funny, fine-grained production at the Custom Made Theatre Company. The stench Wohl ("Small Mouth Sounds") focuses on in her script is less olfactory than factory-like: "American Hero" captures the monotonous dead-end jobs and associated disrespect so much of the workforce is asked to accept in today's U.S. economy.

The one-act, 90-minute show takes place entirely in a brand-new Toasty Torpedoes location (set designer Heather Kenyon leaves no question about her model), following three employees through their training, the shop's not-so-grand opening and several weeks of nose-diving business after management goes AWOL. That Moss and her superb cast of four are able to elicit so many genuine laughs from Wohl's squalid scenario without making fun of the poor souls at its center or veering too far into the maudlin is no mean feat.

The hapless co-workers are Sheri (Devon deGroot), an ingenuous 18-year-old high school grad for whom the sub shop is a second fast-food job, supplementing an across-the-mall gig at El Taco; Jamie (Laura Espino), a divorced mother who needs to be employed to stand a chance in her custody battle; and Ted (Paul Stout), a laid-off white-collar middle manager torn between near-suicidal disillusionment and unwarranted, cheerleading faith in corporate culture.

The cast is rounded out by the wonderful, elastic-faced David Boyll in four distinctly played roles, each of which captures a different flavor of naivete: Bob, an Eastern European immigrant who believes he's buying into the American dream with his sandwich franchise; a customer who berates the restaurant's underpaid, underacknowledged staff for out-of-stock ingredients, as if the hourly workers have any agency in the matter; an "if you dream it, you can do it" figment of Sheri's youthfully optimistic imagination; and a representative from corporate headquarters who turns out to hate his job as much as any of the shop workers.

None of the characters is played as a stock type. With an arsenal of eyerolls, pained grimaces and defiant postures, Espino reveals a depth of desperation beneath Jamie's superficial sass and sexual bravado. Stout's Ted has lost his identity along his career path, and is wracked with palpable shame, his arms chugging like pistons at his sides, a would-be workhorse already out to pasture. DeGroot's Sheri, who often sleeps in her car between jobs, slowly awakens over the course of the play, her initial blank expression tightening into determination and motivation as she unravels the scam her crew is caught up in, and improvises a temporary way out.

Given its format, "American Hero" evokes situation comedies from "Alice" to "Superstore," but a more apt television precedent can be found in the best of "Saturday Night Live." The show plays like one of SNL's character-driven food-service sketches (Belushi and Akroyd in "Cheeburger, Cheeburger," or Timberlake in "Bring It On Down to Veganville") infused with enough of the sociopolitical humor of "Weekend Update" to justify its length. Wohl's writing, as in many SNL sketches, is much more focused on character, dialogue and overall conceit than plotting. While altogether enjoyable, "American Hero" struggles to reach a resolution, stuttering from a fantasy sequence to a far-fetched plot twist to a final dollop of sentiment, as out-of-place in this satire as literal schmaltz at a Subway.

Still, Custom Made's production offers plenty of meat to chew on, with a relative minimum of cheese. The intersection of Subway and the American way makes for a funny play with a lingering stink.