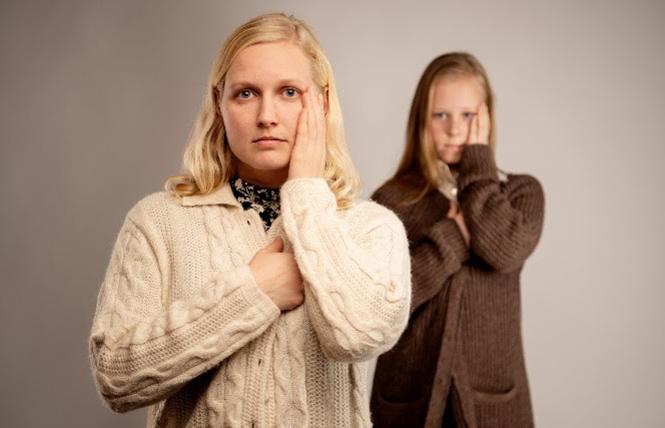 "Violet" is in bloom, and it's a sight to behold. Also, a joy to listen to. The four-year-old nonprofit Bay Area Musicals (BAM) organization has come fully into its own with this sparkling production of composer Jeanine Tesori ("Fun Home") and lyricist/book-writer Brian Crawley's adaptation of a short story by Doris Betts.

A fresh and compact bouquet of pleasures, the show, set in 1964, follows its titular backwoods gal on a Greyhound ride from her home in rural North Carolina to Tulsa, Oklahoma, where Violet hopes to have her facial scar, the result of a childhood tragedy, erased by her favorite television faith healer. Along the way, characters who initially recoil from Violet's appearance abandon their scorn, coming to appreciate her inner warmth.

The scar is reacted to and spoken of, but not visually represented on stage; its existence, for Violet, proves as psychological as it is physical. It will hardly surprise you that Violet undergoes a similar reassessment of her own worth. What should surprise you is that such potentially lachrymose material delivers far more pop than corn.

A crackerjack six-piece combo under the music direction of Jon Gallo keeps things moving at a nonstop, no-time-for-sobbing pace, and Tesori's amalgam of blues, folk and country vernacular stays light on stand-still balladry, setting toes tapping while Crawley's tight scenes whiz by at a bus-window clip. The direction, by Dyan McBride, is cinematically fluid. When the stage erupts into gospel, you may find it challenging to remain in your seat.

An ideally cast 12-year-old Miranda Long plays Violet in her youth, often harmonizing with Lustenader as childhood memories intermingle with the present. Jack O'Reilly and Jon-David Randle are both swoonworthy as military men who befriend Violet on her trip, then fall into an unpredictable love triangle. And in his big solo "Raise Me Up," Clay David's high-bouncing, low-down preacher man almost steals the show, even amidst a kick-ass ensemble of 15 in which every performer offers moments of splendid near-thievery.

In this month when San Francisco's commercial producers are welcoming pricey blockbusters "Hello Dolly" and "Hamilton" to town, "Violet," with its top ticket at $65, offers showgoers the greatest value in town, hands down.