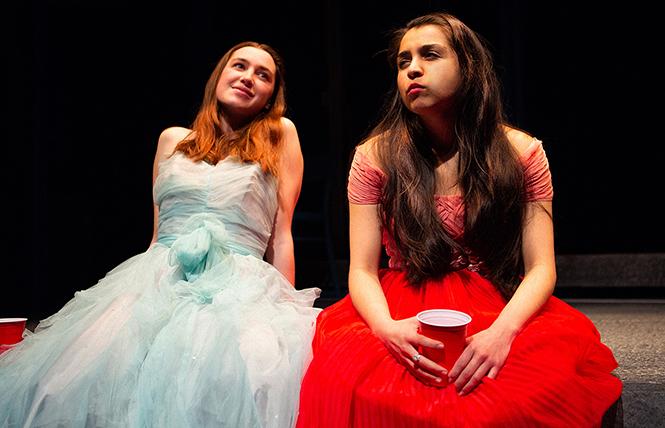 Blaze harbors a longtime crush on a classmate, Gabe (Davied Morales). When he receives an out-of-town college scholarship, it throws into relief Kit's gloomy perspective that the world is divided into "the ones that leave and the ones that get left behind," and that her daughter belongs to the latter cohort. Gabe's nickname for Blaze is "Stick," and yes, she's lanky, but she's also stuck. In the sticks. Too clever by half? Consider it foreshadowing.

Blaze has been reaching beyond her parochial confines for quite some time. She's got a YouTube channel on which she posts lively video monologues of herself portraying female saints and woman warriors she's researched in the library, projecting fantasies about making her way out of town and making a difference in the world. Even when her views number only in the dozens, their far-flung provenance gives Blaze a sense of potential.

Marcantel acknowledges both the value and the false promise of the internet in the hinterlands. It's clear that Blaze's social media activity helps assuage her feelings of isolation, inspires her creativity, and draws her into intellectual discussions unlikely to take place in her hometown. On the other hand, watching one of her friends, Rowena (Neiry Rojo, at once immature and world-weary), fret over nude selfie etiquette and rely on an app for spiritual guidance reminds us that the iPhone can serve as an opiate.

Unfortunately, as Blaze reaches out, Marcantel overreaches. The play's title refers to the online relationship Blaze is drawn into by Wafiya (Liz Sklar), a confident young woman who grew up in Michigan, realized America wasn't all it's cracked up to be, and moved to Syria ("a paradise") so she could marry an anti-Western extremist who, she effuses, enjoys reading books with her as they loll in a hammock.

The notion of foreign terrorist groups radicalizing disillusioned Western youth is intriguing, but Marcantel never credibly shows us how that might happen. Wafiya's text messages to Blaze amount to little more than chitchat: America is soooo bad, right? There's no sophisticated gamesmanship on Wafiya's part, no cunning manipulation of malaise into righteous anger. Blaze's intelligence routinely trumps her inexperience. She's quick to challenge Wafiya on a point of Islamic theology (she's studied up at the library) and makes it clear she's unwilling to wear a hijab. Yet Blaze works extra shifts at the Dairy Freeze, saving up for airfare to the Middle East.

The play's Louisiana scenes cede to momentum-sapping monologues about terrorist recruitment delivered directly to the audience by Agent Salem (Mohammad Shehata). In his final speech, we realize that Salem is prosecuting Blaze. But not because she's ended up committing acts of terrorism with her paradise pals; she never made it out of the country. Turns out "Wafiya" was Salem's collaborator in a U.S. government entrapment scheme. Their mission: scour the internet for young Americans who might be susceptible to extremist overtures; lure them to pledge allegiance to radical forces abroad; then arrest them as terrorists. This operation not only sounds as ill-conceived as Build That Wall, it's enough to make an audience member want to bang his head against it.

After nearly two hours in the compelling emotional milieu of Blaze and her Louisiana crew, the last few scenes of "White Girl's Guide" feel like a trapdoor into a lesser story. Too much exposition unreels in the play's final minutes, all of it about characters Marcantel has ignored until then. Salem, an Arab-American, feels guilty having entrapped so many brown boys through his operation, and relishes the opportunity to see a white girl convicted. "Wafiya" implies that the agents have an ill-fated romantic history, further complicating their motivations. It's like a half-season of "Homeland" has arrived via shoehorn.

Marcantel is wrestling with a broad range of notions about identity (racial, gender, class, national) while trying to craft an unlikely genre hybrid. Her script is admirable in its ambition, but clearly still in development. Here's hoping that Marcantel finds "A Playwright's Guide to Prioritization and Proportion."