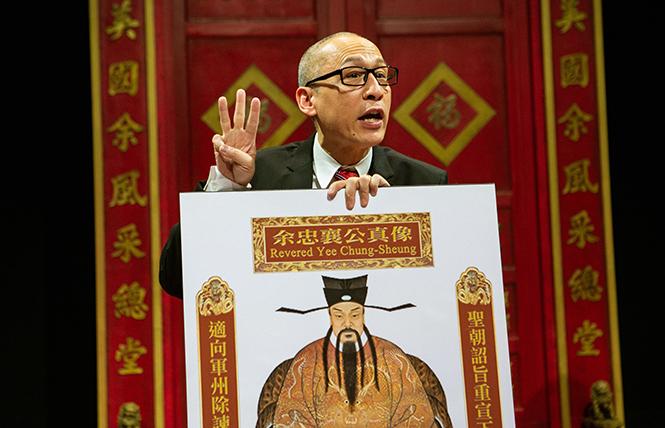 "I never met a meta I didn't like." That's how I imagine the actor Frances Jue re-phrasing Will Rogers in the wake of his two most recent San Francisco stage roles. Last year's Mobius musical "Soft Power" found Jue playing David Henry Hwang, a playwright character based on that show's real-world writer. Now, in the San Francisco Playhouse's equally loopy "King of the Yees," Jue portrays Larry Yee, the father of playwright Lauren Yee, who herself is played onstage by Krystle Piamonte.

While it's surely coincidental that Jue was cast in these two parts, it's a happy coincidence. In "King of the Yees," his ability to keep the ebullient Larry grounded in genuine emotion provides a necessary anchor for Lauren Yee's confetti cannon of a script and Joshua Kahan Brody's kaleidoscopic staging. His performance is the central axis that keeps "King of the Yees" from spinning out into chaos.

For the most part, the near-chaos is delightful. The show's very first scene has Jue's Larry interrupting the rehearsal for a play that Lauren has written about him and about their relationship. He's human helium: excitable, high-spirited, positive-thinking.

While Larry's presence is cheerful, it's also so commanding that one can understand how his daughter might have needed to put some distance between them in order to find an identity for herself. And also how she might have felt compelled to make art of him. The play's structure matches his exuberant spirit; it's a blessed excess of digressions.

Among other topics touched upon, this non-linear fantasia of sharp-edged comic fragments shows us the frustration and alienation felt by non-Cantonese-speaking Chinese-Americans in Chinatown; the unquestioning persistence of ethnic loyalty in the face of community corruption; and the inextricably braided affection and disdain for sources of stereotypes: Kung Fu movies, wizened elders, fortune cookies, and penny-pinching.

Beneath the carnival atmosphere, playwright Yee wants us to understand that there's a breach between father and daughter, a lack of earnest communication amidst the torrent of distracting words and activity. It's ironic that while crafting a robust Larry, Yee has underwritten the onstage version of herself. Self-effacing modesty is both a Chinese-American stereotype and sometime truth.

Still, even without quite explaining what leads to her character's eventual insights, Yee does give her avatar a beautifully written closing monologue. It will tug at your heart. But what will fully pull you into this rough and rapid show's emotional undercurrent is Jue's performance. Over the course of the evening, he masterfully adds layers of feeling to the happy-go-lucky Larry we're first introduced to. You'll feel how hard it is for him to articulate his profound sense of connection to his forbears — and to his daughter as well. Toward the play's end, the tears that well in his eyes and the crooked rictus of his silently wailing mouth say more about the power of filial bonds than any words could convey.

For all its fanciful, intellectual meta-theatrics, "King of the Yees" turns out to be a love story.